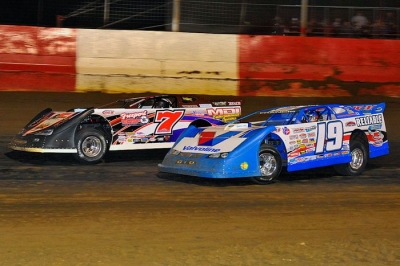 GIBSONTON, Fla. (Feb. 3) — Matt Miller's plan during the Lucas Oil Late Model Dirt Series opener of the 33rd annual Dart Winternationals was to use harder tires that would heat up and propel him to victory at East Bay Raceway Park. The Whitehouse, Ohio, driver wasn't so sure about the strategy after dropping a few spots back from his sixth starting position early in the 30-lapper. | Complete East Bay coverage

"I thought we were going to be in trouble there," Miller said. "We were headed the wrong direction."

But Miller's tires heated up, the third-mile oval's surface picked up rubber, and competitors with softer tires faded. The night ended — not without a little controversy — with Miller in victory lane with a $5,000 payday.

The 37-year-old Miller notched his third career Winternationals triumph and second in the last two years. "Anytime you win at Speedweeks, I don't care where it is, when it is, how much it is, it's not easy to do," Miller said.

Tim Dohm of Cross Lanes, W.Va., the night's fastest qualifier among 69 entries, made it as tough on Miller as possible by jumping into the lead from his pole position and setting the pace past the feature's midpoint. Miller, fifth at halfway, jumped to the outside and picked his way toward the front, finally getting to second by lap 21.

As Miller tried to overtake Dohm between turns three and four, the nose of Miller's car made contact with the rear of Dohm's car, sending the leader spinning out of contention. Miller restarted out front and cruised the rest of the way. He was sorry for Dohm's predicament, but didn't take the blame.

"He was running the bottom, then he drove down to the bottom there and slid right up in front of me," said Miller, who led the last eight laps. "But in order to pass on the outside, you've gotta carry more momentum around the outside, and there was nowhere I could go."

Dohm denied leaving his groove. "I ran the same line the whole race," said Dohm, who finished 20th. "I couldn't believe it when I looked and saw it was Matt Miller. It really surprised me. I just didn't expect that out of him."

The feature was slowed by six cautions, the most serious when Jordan Bland slammed the turn-one wall on a lap-19 restart. He wasn't injured.

The first caution waved on lap four for Victor Lee and on the restart, sixth-running Tyler Ivey got out of shape in turn two and ended up spinning on the backstretch.

On the seventh lap, Terry Casey spun in turn two while battling with Wayne Chinn. On the ensuing restart, Dennis Erb Jr. was running third when he spun in turn two after contact with James.

Action continues Wednesday at East Bay with another $5,000-to-win, 30-lap feature. Officials also announced that Monday's rained out feature has been rescheduled for Friday, setting up a rare East Bay doubleheader. Hot laps will begin at 11 a.m. for the $5,000-to-win event, then action will continue starting at 5 p.m. Friday for an originally scheduled $10,000-to-win event.

Jordan Bland outdueled Ray Cook for a victory in the non-qualifiers' dash, earning a spot in the feature event.

Polesitter Rick Eckert cruised to victory while wild action raged far behind him in a battle for the other transfer spot in the 12-lapper. Don O'Neal dueled with Mike Marlar early before pulling away, then O'Neal kept Earl Pearson Jr. at bay in the final laps. Marlar ended up fourth. Travis Varnadore spun in turn four on the sixth lap to draw the race's lone caution.

Jimmy Owens launched into the lead from outside the front row and raced to a victory, earning his first feature start at East Bay in a Super Late Model in the last two years. Clint Smith, who challenged Owens on a late restart, stopped a winter dry spell by getting the second and final transfer spot from his third starting position. Ray Cook tried a late high-side move that was halted by Smith on the backstretch and finished third while polesitter Jordan Bland, who contended up front early, faded to fourth. Bob Geiger slowed on the 10th lap to draw the race's lone caution.

Third-starting Eric Wells worked the low groove to success, overtaking Ricky Arms and Brady Smith in the final laps for the 12-lap victory. Smith, who led early before falling behind the high-running Arms on a lap-three restart, got the second and final transfer spot. Arms started sixth and got rolling in the high groove, making a third-to-first move on an early restart. Arms led into the race's late stages but lost the point after losing momentum by making contact with the frontstretch wall. He ended up third with Steve Casebolt fourth. Three cautions slowed the action. Dillan White spun on the third lap to bring out a yellow and a lap-eight yellow appeared for debris, then the caution reappeared when Shon Flanary spun on the restart.

Polesitter Matt Miller cruised to victory in the final heat over fellow front-row starter Davey Johnson while Wayne Chinn, making the biggest rally of the night, was third. Chinn started ninth and worked his way to the front early, benefitting from some bumping on the first lap that included Don O'Neal. Rick Eckert held the third spot most of the way but Chinn, after rubbing his way past Dale McDowell in turn three, caught Eckert and took the final transfer spot with fewer than two laps remaining. McDowell, making his first competitive laps for Clint Bowyer Racing, slowed and dropped out with apparent mechanical problems midway through the race.

Thrid-starting Billy Moyer, going to the lead early, got rolling again at a track where he won three of six features in 2008. Moyer outran front-row starter Freddy Smith for the victory while Jeep Van Wormer was third over Earl Pearson Jr. in a match of two drivers who switched from MasterSbilts to Rockets for the 2009 season. Travis Varnadore, the 17-year-old nephew of East Bay president Al Varnadore, started outside the front row but got into the frontstretch wall while completing the first lap to bring out a caution.

Dennis Erb Jr. outdueled polesitter and fellow front-row starter Tyler Ivey in the early laps and cruised to victory while Ivey was second to make his first-ever feature at East Bay. The top two ran away while the battle for the third and final transfer spot was a good one. Third-starting Chris Wall fought off Jimmy Owens and Ray Cook for the third spot.

Polesitter Steve Francis led the final three laps following the departure of race-long leader Josh McGuire. Donnie Moran pressured Francis late and finished second while Josh Richards was third, fighting off Jordan Bland's late charge. McGuire was in a close battle with Francis all the way when the two got hooked up exiting turn two. The two stayed together down the backstretch and McGuire ended up spun at the turn-three entrance. It was unclear if McGuire lost power in front of Francis.

Driving for Illinois-based Riggs Motorsports, polesitter Scott James led a three-car breakaway in winning the second heat over Eric Jacobsen and Terry Casey. The top three raced tightly throughout the race with James hanging on for the victory. Tyler Bruening, an Iowan making his first appearance at East Bay, closed up on the top three late in the race to finish fourth.

Fast qualifier Tim Dohm, inheriting the pole after Scott Slay wrecked on the first lap, led all 10 laps, topping a five-car parade to the checkers. Fourth-starting Dan Schlieper stayed close in finishing second with front-row starter Victor Lee getting the third and final transfer spot after holding off sixth-starting Brady Smith. The race's lone caution appeared on the first lap when Slay, the original polesitter, got too high in turn four and backed into the wall, his No. 6 bounding high into the air.

Always fast at East Bay Raceway Park, Tim Dohm of Cross Lanes, W.Va., got the 33rd Dart Winternationals off to a good start as the fastest qualifier among 69 entrants at Tuesday's Lucas Oil Late Model Dirt Series event. Dohm posted a lap of 14.908 seconds at the third-mile oval where he won in 2007. "We started it off right," said Dohm, who broke three engines during last year's Winternationals action. "Now if we can keep the motors together we'll be OK."

Dohm spun a three on the Performance Rod & Custom wheel that sets heat-race inverts, meaning he'll start third in the first heat race as the Lucas Oil series debuts a new race format by splitting all qualifiers into two groups. Dohm topped Group A while Chris Wall of Holden, La., was fastest in Group B, putting him inside the second row for the fourth heat.

Drivers in Group A will run heats 1-3 while drivers in Group B will run heats 4-6. The top three finishers from each of six heat races will transfer to the main event with Group A drivers in the inside row and Group B drivers in the outside row. Drivers from transferring through consolation races will fill the remainder of the 24-car field. The night's 30-lap main event, now the opener after Monday's action was rained out, is scheduled to pay $5,000.