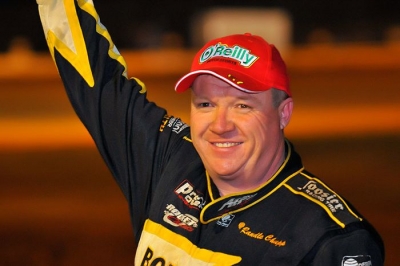 Pulling off a stirring rally during a wild 50-lap feature, the 24th-starting Chupp earned $10,000 for winning the O'Reilly Southern All Star finale at Golden Isles Speedway's Super Bowl V. The 43-year-old Chupp, who slapped the guardrail in a heat race and was part of a consolation-race melee, used a provisional to start the feature and immediately marched toward the front, mostly in the low groove. | Complete Golden Isles coverage | Saturday slideshow

The Troutman, N.C., driver was up to fifth at a lap-25 caution when race-long leader Scott Bloomquist was knocked out of contention in a frontstretch scramble with Chris Madden's lapped car, then Chupp was up to second at a lap-30 caution after outdueling Jimmy Owens for the runner-up slot.

Then Chupp went to work on John Blankenship, snookering the leader in turn one on lap 37 behind a lapped car to slip under and take the lead. Chupp cruised the rest of the way.

"I wasn't going to be denied," said Chupp, who last year posted a best finish of just 13th in three Golden Isles starts. "Once I got up there to third or fourth, it was going to take a herculean effort for someone to beat us, because I was going to lay it out there, and that's what I did."

Blankenship, who early in the race joined Bloomquist for a two-car breakaway, settled for second while polesitter Matt Miller of Whitehouse, Ohio, finished third. Kelly Boen of Henderson, Colo., was fourth and Josh Richards of Shinnston, W.Va., finished fifth for the third straight night. Bloomquist, of Mooresburg, Tenn., ended up seventh.

"I felt like early in the week I knew I could win any event during the week if I just executed properly," said Chupp, whose first Dirt Late Model success came as a top-flight crew chief before he began driving in the mid-'90s. "At this level, it's all about the chess game. You've gotta play your chess right. I definitely didn't play the early part of the night right, but I definitely played played the last part of the night right, and that's what mattered most."

Through the first half of the race, it appeared the Friday-winning Bloomquist would march to his second consecutive Super Bowl victory from outside the front row. Only Blankenship, who started fourth, could keep up with the leader as they stretched far ahead from the pack.

Bloomquist swept past most lapped cars, but he had more trouble with Madden, Thursday's feature winner. After a few unsuccessful inside moves, Bloomquist tried the outside groove exiting turn four just as Madden was drifting high on the frontstretch. The two Bloomquist Race Car drivers made hard contact, squeezing Bloomquist into the guardrail and shredding his left-rear tire. Series officials reported that Madden broke a wrist in the accident, and he was later taken to South Georgia Medical Center in Brunswick.

Blankenship inherited the top spot for the midway restart with Miller, Owens, Boen and Chupp giving Chase. Chupp overtook Boen and Miller by lap 26 and began a tight battle with Owens as Blankenship was in control out front.

Chupp's turn-four slide job on lap 29 moved him past Owens, and when Owens tried to answer Chupp's move in turns one and two, his No. 20 spun out of contention, drawing the race's second caution.

Blankenship, of Williamson, W.Va., led the field back to green with 10 laps remaining as he and Chupp pulled away from the pack. As the frontrunners came upon the slower car of Ben Faircloth in turn one, Blankenship got caught behind the lapped car while Chupp deftly slid underneath to take a lead he'd never give up, crossing the finish line five seconds ahead of his closest pursuer.

"We had a lot of trouble earlier in the week, and it was mainly the motor," said Blankenship, who hadn't been a factor the first two nights. "Once we switched the motor, we'd been a lot better. Tonight we had a really good run going. Scott (Bloomquist) probably still would've bettered us, but we went a little soft on the right-front (tire) and it ended up killing toward the end and got a push."

In a 25-lap feature among the top 10 in the week's points, Owens overtook race-long leader Bloomquist with an outside pass on a lap-20 restart to grab his second straight Super Bowl championship. Owens earned $5,000 with Bloomquist, Randle Chupp, Josh Richards and Rick Eckert rounding out the top five.

In the 30-lap National Late Model Series feature, William Thomas of Phenix City, Ala., improved one spot from Friday night's runner-up finish for a $3,000 victory. Brandon Dewitt and Darrell Padgett chased Thomas to the checkered flag.

Notes: Chupp's Rocket Chassis has a Randy Clary engine and sponsorship from Starrette Trucking and Wolf-Pack Racing. ... Chupp dedicated the victory to the memory of car owner Jack Starrette's late wife, Carolyn, who died Dec. 21. ... Half of the 24 starters finished on the lead lap. ... Nineteen cars were running at the finish. ... Before the race, feature starters carried their helmets into the grandstands and collected $3,289.15 for the Tim McCreadie Support Fund. McCreadie, a dirt racer from Watertown, N.Y., and 2006 World of Outlaws Late Model Series champion, suffered serious back injuries earlier this month in a flipping accident at the Chili Bowl Midget Nationals in Tulsa, Okla.

Polesitter Billy Moyer cruised to a victory and transfers to the feature along with Earl Pearson Jr., who started fourth and ran second most of the way. Jason Fitzgerald and Dillon Wood battled for third much of the race but couldn't make up ground on Pearson. Two cautions slowed the action. Clint Smith spun in turn four on the second lap, collecting Tyler Reddick to bring out the race's lone caution. On the next restart, Tommy Kerr got into the frontstretch wall after contact with Mike Collins.

Jordan Bland eclipsed polesitter A.J. Kirkpatrick on the seventh lap in turn two and raced to a victory in a 10-lap consolation with tight racing up front all the way. Chris Madden, scheduled to start 17th in a race with several scratches that moved him up, got by Kirkpatrick to finish second. Kirkpatrick spun on the last lap while Chub Frank rallied to finish third but missed a transfer spot. Several drivers were knocked out by a first-lap scramble in turn four that involved most of the field. Randle Chupp, who started third, was among drivers who went pitside and didn't return after the melee and Dennis Erb Jr. suffered damaged that eventually forced him pitside. Dean Bowen spun by himself exiting turn four on the third lap for another caution.

Polesitter Jimmy Owens race to an eight-lap victory, staying just ahead of a charging Tim Fuller. The third-starting Fuller, who got past Ivedent Lloyd Jr. for second on the fourth lap, closed down a half-straightaway lead to within just a few lengths of Owens. Lloyd held on to finish third.

With the outside groove continually providing the best place to start, front-row starter Steve Shaver got ahead of polesitter at the outset and won the caution-free prelim. Boen finished a few lengths back in second while Brady Smith was a half-straightaway back in third. Dillon Wood pressured Smith but missed getting the final transfer spot.

Polesitter John Blankenship led all the way for the victory, fighting off a last-ditch charge from Steve Francis. Eric Jacobsen, who started fourth and quickly moved into second amid a few early scuffles, held that spot until the sixth lap before losing it to Francis on the backstretch. Jacobsen still held on for the third and final transfer spot while Billy Moyer, Earl Pearson Jr. and Shane Clanton — all who were out of shape at one point or another — will go to consolation races.

Josh Richards led all the way from outside the front row for an easy victory in a wild heat race while third-starting Casey Roberts finished solidly in second. Tyler Ivey, who started fourth, got the third and final transfer spot by fighting off Chris Madden's late charge. Madden and Chupp, two of the week's fastest drivers, didn't transfer. Madden nearly spun trying to overtake Ivey on the seventh lap and had to restart on the tail. The polesitting Chupp slid too high on the first lap, bumping the turn-two guardrail and then losing more ground on the second lap when he got out of shape on the backstretch. Chupp recovered to finish fourth.

Polesitter Scott Bloomquist, initially warned for jumping the first start, got ahead of fellow front-row starter on the next attempt and cruised to an easy victory. Schlieper ended up about a half-straightaway behind at the finish with Ben Faircloth further back for the third and final transfer spot. Jeremy Faircloth was fourth behind his brother.

Getting the jump on polesitter Ronny Lee Hollingsworth, Matt Miller raced to an eight-lap victory in the opening heat. Hollingsworth stayed on Miller all the way but couldn't find a way past in settling for second. Rick Eckert closed in on the lead duo late in the race and got the third and final transfer spot. A.J. Kirkpatrick was a distant fourth.

Ronny Lee Hollingsworth, whose opportunity at fast time Wednesday was washed away by a rainout, made up for it Saturday with a track record at 4/10-mile Golden Isles Speedway. Hollingsworth's 15.059-second lap puts him on the pole for the first heat on a night when O'Reilly Southern All Star Super Late Models battle for a $10,000-to-win Super Bowl V feature. Other heat race polesitters are Scott Bloomquist of Mooresburg, Tenn. (Friday's feature winner); Randle Chupp of Troutman, N.C.; John Blankenship of Williamson, W.Va.; Kelly Boen of Henderson, Colo.; and Jimmy Owens of Newport, Tenn.

Besides the $10,000-to-win SAS feature, the top 10 in the week's points will run a 25-lap feature paying $5,000 to the winner (and at least $1,000 to each starter) .... The top 10 drivers won't be determined until Saturday's main event, but the top 10 after two races: Bloomquist, Madden, Randle Chupp, Josh Richards, Earl Pearson Jr., Ronny Lee Hollingsworth, Matt Miller, Rick Eckert, Brady Smith and Jimmy Owens. ... It's likely the top five drivers are a virtual lock for the points race, a scheduled 25-lapper. ... Track owner Frankie Lloyd initially said the points fund would be cut 25 percent because of Wednesday's rainouts, but they've restored the full points fund and the Super Bowl champion will receive $5,000. Every driver among the top 10 will receive at least $1,000. .... Drivers will draw for starting positions for the 25-lap Super Bowl championship, and officials are making sure it won't be a snoozer. If the cars are strung out after 10 laps, a yellow will be thrown and the race will be restarted double-file. If they're strung out after 20 laps, they'll again be double-filed for the final five laps. ... The only newcoming driver for Saturday's action is Brad Neat of Dunnville, Ky., who entered a Rocket Chassis (he drove a MasterSbilt last season). ... Previous Super Bowl drivers who aren't entered Saturday: Terry Casey, Danny Mitchell, Donnie Moran, Mark Andersen, Duke Whiseant, Benji Cole, Craig Sheffield and Darren Miller, who initially entered but withdrew after discovering a screw had broken off and fallen into his car's engine. ... California driver Eric Jacobsen switched to a backup car. ... During an intermission, drivers are expected to carry their helmets into the grandstands to collect money for the Tim McCreadie Support Fund. McCreadie, a dirt racer from Watertown, N.Y., suffered serious back injuries earlier this month at the Chili Bowl Midget Nationals in Tulsa, Okla., and didn't have any health insurance. Mark Richards of Rocket Chassis plans to take any contributions to McCreadie. ... Besides Southern All Star and NLMS Late Models, only the three-quarter Late Models (undersized cars using motorcycle engines) are in action. ... Temperatures are in the low 50s as hot laps begin about 6:05 p.m., but another chilly night is in store.