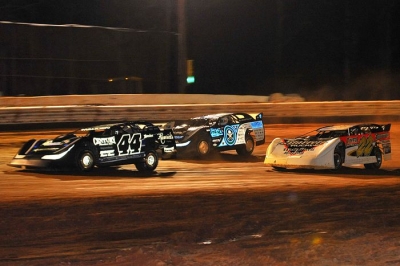 Scott Bloomquist (0) gets off to a good start. (thesportswire.net)

BRUNSWICK, Ga. (Jan. 30) — Darting inside and out in the early laps, Scott Bloomquist put on a driving clinic at Golden Isles Speedway in racing to a 40-lap victory in the second round of Super Bowl V at the 4/10-mile oval. | Complete Golden Isles coverage

The Hall of Famer from Mooresburg, Tenn., earned $7,500 for the O'Reilly Southern All Star Series victory in southeast Georgia as he crossed the finish line a half-straightaway ahead of polesitter Randle Chupp of Troutman, N.C., who was the runner-up for the second straight night. Kelly Boen of Henderson, Colo., made a last-lap pass to take third from Chris Madden of Gray Court, S.C., who started outside the front row and led the first lap. Josh Richards of Shinnston, W.Va., recorded his second straight fifth-place finish on a chilly, breezy winter night.

"I like setting the pace," said Bloomquist, a two-time winner during last year's Super Bowl action. "The sooner I can do it, the better. When it's a 40-lap race, you can't waste any time."

The fourth-starting Bloomquist launched his masterful attack at the waving of the green flag, sweeping around Chupp before reaching the flagstand and quickly going to work on Madden. On the second lap, Bloomquist dove low in turn three and easily eclipsed Madden for a lead he'd never give up.

Madden, Thursday's feature winner, followed Bloomquist's high-side tire tracks 10 laps before pressuring the leader amid traffic from the low groove. Madden nearly pulled alongside Bloomquist exiting turn four on the 16th lap, but another patented outside-inside move down the frontstretch helped Bloomquist slip by slower cars and build a cushion. He wasn't challenged the rest of the way. Chupp, who fell behind the lead duo before the halfway point, charged back into contention and overtook Madden on the 30th lap, but he wasn't able to take a serious stab at the winner.

"It's no embarrassment to run second to Scott. He's a fantastic racer," said Chupp, who got $3,500 for finishing second. "I've just gotta step my game up one more spot."

The Super Late Model race was slowed by a single caution on the 28th lap when John Blankenship of Williamson, W.Va., pulled his smoking car to the pits.

In the National Late Model Series 30-lap feature, Johnny Collins of Jacksonville, Fla., fought off a late charge from William Thomas of Phenix City, Ala., taking the checkered flag .041 seconds ahead of Thomas. Brandon Cameron, who led most of the way, finished third.

The final Super Bowl V events are scheduled for Saturday. Southern All Star racers will battle for a $10,000 winner's purse and National Late Model Series drivers will run for $3,000.

Outside front-row starter Billy Moyer used the high groove to get the early lead from polesitter John Blankenship, then kept Blankenship at bay the rest of the way for a victory. Blankenship locked up the second and final transfer spot by finishing far ahead of Tim Fuller. Two cautions slowed the action. Dale Groves Jr. and Anthony Hill spun in turn four on the first lap. Just after the restart, Mike Nasworthy spun in turn four after contact with Mike Collins; Groves was collected and pulled to the infield with a flat right-front tire.

Working the low groove, third-starting Jimmy Owens worked under Earl Pearson Jr. on a second-lap restart and led the rest of the 10-lapper to earn a feature starting spot. Front-row starter Pearson, who battled with Owens and polesitter Ivedent Lloyd Jr. in a tight first-lap battle, finished second. Lloyd pulled off the track during a lap-five caution and Brady Smith, who started fourth, finished a distant third. Two cautions slowed the action. A.J. Kirkpatrick spun in turn four on the second lap to draw the race's first yellow. Another caution appeared on the fifth lap for a turn-three scramble that included five cars including Jason McBride, Ed Basey and Danny Mitchell. McBride's No. 77 was towed off the track.

Kelly Boen, rebounding from a heat-race wreck the previous night, led all the way from his pole position, crossing the finish line several lengths ahead of third-starting Rick Eckert. Front-row starter Stacy Holmes struggled early and ended up ninth while fifth-starting Tyler Ivey moved up to get the third and final transfer spot ahead of Steve Shaver. Anthony Hill had mechanical problems and pulled off the track.

Following up an impressive performance by his brother in the previous heat, polesitter Jeremy Faircloth captured the fifth heat race to earn a third-row feature starting spot. Faircloth kept an edge on Donnie Moran through the prelim for the victory while Matt Miller for the third and final transfer spot. Billy Moyer, early, and Shanon Buckingham, later, were in contention for transfer spots but both slipped high in turn four in separate incidents. Moyer recovered to finish fourth while Buckingham faded to seventh.

Polesitter Scott Bloomquist cruised to an easy victory, finishing more than a straightaway ahead of fifth-starting Darren Miller. The battle for the third spot was a good one. Mike Nasworthy, who ran second early before losing the spot to Miller, held the third position midway through the race but has his hands full with sixth-starting Ben Faircloth and John Blankenship, who started outside the front row but slipped back to fifth on the first lap. Faircloth made the extreme low groove work and grabbed the third and final transfer spot with two laps remaining. Blankenship was third and Nasworthy dropped to sixth behind Tim Fuller on the final lap.

Ronny Lee Hollingsworth made it three victories in a row for polesitters as he held off early challenges from Casey Roberts and went on to a victory. Roberts never lost touch with Hollingsworth and finished second while Chub Frank was further back in third after surviving a tight, mid-race battle that included Jimmy Owens, Dan Schlieper and Steve Francis.

Surviving a light brush with fellow front-row starter Shane Clanton as they took the green, polesitter Randle Chupp grabbed the lead and went on to a victory that gave him the feature pole position for the second straight night. It was a two-car breakaway with Chupp and Clanton far ahead of the field. Clanton finished second about six lengths back while Jesse Stovall got the third and final transfer spot more than a straightaway further back as Stovall fought off Brady Smith's challenges. Smith nearly got alongside Stovall on the white-flag but slipped to fifth behind third-starting Ivedent Lloyd Jr. on the final circuit.

Setting quick time for the second consecutive night, Randle Chupp of Troutman, N.C., topped 60 qualifiers at Golden Isles Speedway for the second round of Super Bowl V. Chupp, who finished second to Chris Madden in last night's main event, is among drivers battling for a $7,500 payday in the night's O'Reilly Southern All Star feature. Chupp will start on the pole of the first heat. Other heat race polesitters are Madden, of Gray Court, S.C.; Ronny Lee Hollingsworth of Northport, Ala.; Jeremy Faircloth of Swainsboro, Ga.; Kelly Boen of Henderson, Colo.; and Scott Bloomquist of Mooresburg, Tenn.ï¿½

O'Reilly SAS series director Kelley Carlton said track owner Frankie Lloyd has pledged to cover weekend purses despite the theft of a safe from the track office overnight. Lloyd, who has posted a $10,000 reward for information leading to an arrest, said the safe contained between $50,000 and $70,000. He and others were perplexed at how the large, heavy safe — it measured about 6 feet tall, 3 feet wide and 2 feet deep — could've been taken from the grounds where many are camping and pitting. Lloyd estimated it would've taken perhaps six men to lift and move it. ... Derek Ellis broke an engine in hot laps and went to a backup car (switching from a Rayburn to a GRT). ... Newcomers for Friday's action are Stacy Holmes of Munford, Ala., Dean Bowen of Whitesville, N.C., and Danny Mitchell of Clarksburg, W.Va. ... Among those who have competed not running Friday are Brent Dixon of Elberton, Ga., and Mark Davis of Savannah, Ga. ... Southern All Star officials have instituted group qualifying for Friday's action. Drivers will qualify and heat race against drivers in their respective groups. ... With temperatures forecast to dip below 30, officials have reduced time trials from two laps to one lap. ... Saturday's event is scheduled to pay $10,000 to the winner.