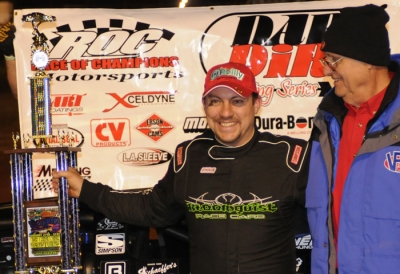 Madden led the first seven laps before Chupp slipped underneath exiting turn four to grab the lead on lap eight. But Madden immediately answered the Troutman, N.C., driver's challenge with a side-by-side suel, and Madden went back ahead for good on lap 12, stretching his lead comfortably midway through the race and keeping Chupp at bay in the final stages of the 35-lapper.

"We had a great car all night long. The car is well-balanced and it drove great," said Madden, whose last major victory at the 4/10-mile oval came in a 2006 Southern All Star race. "I got to lapped traffic and they were throwing their crumbs out on the racetrack and I got to skating around a little bit, and I didn't pressure the lapped traffic quick enough."

But Madden worked his way into a groove faster than Chupp's, the runner-up said. "The racing lane was moving around some. I was the first one to catch it different," Chupp said. "Me and Chris started out the race running the same line. I found a second lane working a little better and snuck by him, then Chris discovered a third line that woke up about that time and snuck back by me."

The fast-qualifying Chupp, who lost the second spot in a frontstretch collision with Shane Clanton on a lap-15 restart that bent a spindle, regained second from Clanton on lap 21 and did his best to catch Madden in the race's late stages, but Madden maintained a cushion of lapped cars to keep his lead safe.

Scott Bloomquist of Mooresburg, Tenn., who started sixth, outdueled ninth-starting Earl Pearson Jr. of Jacksonville, Fla., in the final laps to finish third while Clanton, who ran third much of the way, faded on the white-flag lap with a flat tire and ended up 14th.

In the 30-lap National Late Model Series feature, Jason Fitzgerald made an outside pass of fellow Jacksonville, Fla., driver Johnny Collins amid traffic on the 10th lap and crossed the finish line 10 lengths ahead of Collins for his first career series victory.

Most of the same drivers will be back at Golden Isles on Friday for a 40-lap Southern All Star feature paying $7,500 to the winner. NLMS competitors will run for $3,000-to-win.

Fourth-starting Chub Frank moved around Jeremy Faircloth on an early restart and held off Steve Francis for a 10-lap victory to earn a feature starting spot. Francis, who started fifth, moved around Faircloth two laps later and wrapped up the second spot. Faircloth, who started outside the front row and had his hands full with World of Outlaws regulars, settled for third ahead of Clint Smith. A lap-one caution appeared when polesitter Russ King, shuffed back on the first lap, spun high between turns one and two. Mike Collins slowed in turn one to draw a lap-six caution.

Eric Jacobsen and Brady Smith nabbed transfer spots in the first consolation, leaving polesitter Tyler Ivey in third and without a transfer spot. Kelly Boen, going to a backup car after his heat race wreck, rallied from the tail to finish fifth in the 20-car consolation.

Polesitter Scott Bloomquist, a two-time winner in Super Bowl action last year, cruised to an easy victory in the final heat. Fellow front-row starter Tim Fuller comfortably held the second spot throughout the race, but was nearly a half-straightaway behind Bloomquist. Second-row starters Shanon Buckingham and Clint Smith battled for the third spot much of the race with Buckingham getting the upper hand in the final laps. Smith was fourth and Benji Cole a distant fifth after overtaking Dillon Wood on the final lap.

Polesitter Josh Richards led all the way for an easy victory while the second spot was contested all race long. Fourth-starting Steve Shaver, who got a great start, held on to the second spot most of the way while Ivedent Lloyd Jr. (low) and Steve Francis (high) battled much of the race just behind him. Lloyd finally bettered Francis then put the heat on Shaver in the final laps, finishing just inches behind in third. Francis, who started third, ended up fading to fifth behind a charging Jeremy Faircloth, who started seventh.

Shane Clanton, surviving a brush with the wall on the sixth lap while leading big, won from outside the front row. Polesitter Dan Schlieper was second in the caution-free race while fifth-starting Dennis Erb Jr. was a close third. Russ King advanced from his seventh starting spot to finish fourth ahead of Chub Frank.

Starting outside the front row, Ronnie Lee Hollingsworth outjumped polesitter Casey Roberts and cruised to an easy victory. Hollingsworth finished nearly a straightaway ahead of Earl Pearson Jr. with Roberts getting the third and final transfer spot. Tommy Kerr moved up from his sixth starting spot to finish fourth. Kelly Boen started fourth and was in a three-wide battle with Pearson and Roberts early in the race. But Boen got too high entering turn two and slammed into the track's tire barriers, knocking him out of the race. Boen's car hit hard on the right side and bounded high into the air before coming down on all four wheels. A red flag was thrown but Boen wasn't injured.

Polesitter Chris Madden outran fellow front-row starter Matt Miller, who found himself in a scramble with several drivers of Bloomquist Race Cars, including Madden. Madden stayed in control all race long, finishing eighth lengths ahead of Miller. Three other Bloomquist Race Car drivers followed them across the line, transferree Jimmy Owens, Eric Jacobsen, and Brady Smith. A lap-three caution appeared when third-starting Jordan Bland got into the turn-four wall triggering an A.J. Kirkpatrick spin in turn four. The first start was called back when four cars spun in turns one and two.

Polesitter Randle Chupp slid in front of fellow front-row starter Billy Moyer exiting turn two on the first lap and cruised to victory. Moyer and fourth-starting Rick Eckert got the other two transfer spots in the caution-free eight-lap prelim.

Randle Chupp of Troutman, N.C., was fast qualifier among 59 cars for the first round of Super Bowl V at Golden Isles Speedway. Chupp recorded a lap of 15.180 seconds on the 4/10-mile oval in the O'Reilly Southern All Star Series action. Chupp will start on the pole of the first of six heat races on a night when $5,000 is on the line for the 35-lap feature. Other heat race polesitters are Chris Madden of Gray Court, S.C., Casey Roberts of Toccoa, Ga., Dan Schlieper of Sullivan, Wis., Josh Richards of Shinnston, W.Va., and Scott Bloomquist of Mooresburg, Tenn. Shortly after time trials, the lights in turns three and four went dim. The lights were repaired and lower-division action began about 7:35 p.m.

The hood on the Jimmy Owens car fell off when he pulled on the track to qualify. It was refastened before he took time. ... Brent Dixon got into the turn-four guardrail on his second qualifying lap. ... Tommy Weder slowed on the track during his second qualifying lap and was pushed to the infield. ... Darren Miller of Milledgeville, Ill., got out of shape in turn four during hot laps and his No. 32D did a slow rollover as Ivedent Lloyd Jr. spun to avoid him. Miller quickly exited the car and didn't appear to be injured as he rode on the driver's side door while the car was towed to the pits. He scratched for the night. ... Randle Chupp was fastest in time trials with a 15.002-second lap, two-tenths under the fastest qualifying lap Wednesday and five-tenths better than anyone in hot laps. ... Other fast times in hot laps: Scott Bloomquist (15.502), Shane Clanton (15.518), Billy Moyer (15.586) and Steve Shaver (15.670). ... The newcoming drivers for Thursday: Dale Hammond of Nichols, S.C., and Dale Groves Jr. of Tallahassee, Fla. Two drivers who competed Wednesday not entering Thursday's racing were Eric Turner of Hermitage, Mo., and A.J. Kirkpatrick of Castroville, Calif., who had engine problems Wednesday. ... Southern All Star officials used group qualifying on Wednesday but plan to qualify straight-up Thursday. ... Three divisions are in action: Southern All Star Late Models, NLMS Late Models and limited sportsman.