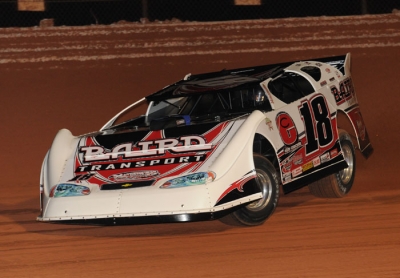 Ronny Lee Hollingsworth showed off his fast No. 18. (butlerracingphotos.com)

The rainout shuffles the four-race schedule as the track is scratching Saturday's scheduled $12,000-to-win event, pushing the other races back one night. Following Thursday's $5,000-to-win makeup event will be a $7,500-to-win race on Friday and a $10,000-to-win race on Saturday, Lloyd said.

Also, Saturday's scheduled 25-lap feature among the top 10 drivers in series points has been scratched, Lloyd said. The three-night points champion will now receive $5,000 without running a race and the remainder of the $12,000 points fund will be doled out among the Super Bowl's top 10 drivers.

Before rain halted Wednesday's action, Ronny Lee Hollingsworth of Northport, Ala., was the fastest in the first four complete groups of qualifying with a 15.214-second lap on the 4/10-mile southeast Georgia oval. The final two groups will complete time trials when Super Late Model action resumes Thursday. The Limited Late Models of the National Late Model Series are also in action with $3,000-to-win events each night.

Scattered showers delayed hot laps more than 90 minutes, then another brief shower toward the end of time trials was the beginning of the end as a misty rain continued off-and-on for at least a half hour. Rain is forecast for overnight through mid-day Thursday but no rain is forecast on Friday or Saturday. ... The 58 Super Late Models was near last year's average for seven nights at Golden Isles. The 2008 event drew a high of 65 cars on Feb. 1. ... The event drew perhaps more entries of drivers in Bloomquist Race Cars of any race ever. There were 11 drivers piloting the Bloomquist cars, including first-timers Jordan Bland and Rick Eckert. ... Modified ace Tommy Weder Jr. of Woodward, Okla., entered in a Victory Circle chassis and pitted alongside Victory Circle's premier driver, Billy Moyer. ... A.J. Kirkpatrick, a five-time winner last season on the Western Allstars DIRTcar Late Model Series, is making his first Georgia-Florida Speedweeks appearance. ... The crowd was larger than some weeknights of last year's Super Bowl with perhaps 400 fans in the grandstands. ... The track sold chances for fans to take rides in a two-seater with Jimmy Owens. ... Wednesday's NLMS qualifying will be scrubbed and redone Thursday, according to series director Ray Miller.