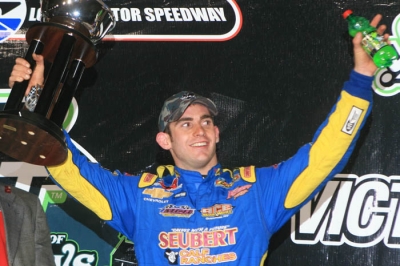 CONCORD, N.C. (Nov. 1) — Josh Richards was on an emotional high after capturing Saturday’s 50-lap Vault World Finals feature at the Dirt Track at Lowe’s Motor Speedway. “This is definitely my biggest win ever,” said the normally reserved Richards. “To win a race like this, on live TV and in front of all these people, is just awesome." | Saturday slideshow | Saturday postrace notebook | Complete Lowe's coverage

With a packed house of over 14,000 fans and a national television audience on the SPEED cable network looking on, the 20-year-old star from Shinnston, W.Va., charged forward from the eighth starting spot to overtake Earl Pearson Jr. of Jacksonville, Fla., for the lead on lap 36. He held off Pearson’s late bid to emerge triumphant.

It was the sixth World of Outlaws Late Model Series victory of 2008 for Richards, who ended the season tied with Steve Francis of Ashland, Ky., atop the tour’s win list. He also bookended the 43-race WoO campaign with wins, capturing the season opener, on Feb. 14 at Volusia Speedway Park in Barberville, Fla., as well as Saturday’s season finale.

Richards secured a career-high finish of second in the WoO points standings, worth $60,000. He ended the season 160 points behind Darrell Lanigan of Union, Ky., who was crowned the 2008 champion on stage at the end of the program after clinching the $100,000 title for the first time in his career the previous night.

“If we just learn the middle of the year a little better, I think we’ll be all right,” Richards said of his 2008 points-chasing. “We’ve got the beginning and the end figured out pretty good, but we gotta do better in the middle to have a shot at the championship.”

Pearson, 36, settled for runner-up money after leading laps 32-35, crossing the finish line 0.535 of a second behind Richards. Dale McDowell of Rossvillle, Ga., who led laps 2-31, placed third, followed by Donnie Moran of Dresden, Ohio, who won the finale at last year's Vault World Finals. Steve Francis of Ashland, Ky., the 2007 WoO champion, was fifth to lock down a third-place finish in the points standings.

Richards’s performance exceeded his expectations for the second night of feature-event action at the blockbuster Vault World Finals, which also included the Advance Auto Parts World of Outlaws Sprint Car Series. He was focused on securing second in the WoO points chase and suddenly found himself in the mix for the victory.

“When I drove through the middle (groove) when Earl and Dale got caught in lapped cars, my car stuck really hard. From then on out it was pretty good, and here we are," Richards said in victory lane.

Richards didn’t cruise to the checkered flag once he put his Mark Richards Racing Enterprises-Seubert Calf Ranches Rocket into the top spot. He survived three late-race caution flags — on laps 37, 41 and 47 — and heavy pressure from Pearson for his first career win at Lowe's.

“I don’t know if (the cautions) got my nerves worse or better, because the whole time I was a nervous wreck,” said Richards, who earned $10,150 for his 12th career WoO triumph. “But I think the cautions probably got me to focus more. With all the times I’ve been leading races and lost in the last couple laps, I wasn’t gonna let it happen this time.”

Pearson sure tried to send Richards home dejected. The Lucas Oil Late Model Dirt Series champion got close enough to bump Richards’s rear bumper racing down the homestretch with the white flag waving, but he slid high in turn one and lost too much ground to make a move for the win.

“When I got right up under (Richards) I lost my front end,” said Pearson, who started second in NASCAR star Bobby Labonte’s LifeLong Locks MasterSbilt car. “I got an aero push and just couldn’t steer when I got to turn one. My car just slid right up to the wall. My biggest problem, though, was when I passed McDowell for the lead, I stayed down low too much and Josh ended up driving by me on the outside. If I would’ve moved up to the middle it would’ve made it a lot harder for (Richards) to pass me.”

McDowell, 42, appeared primed to record his first WoO victory since Sept. 23, 2005, at Kentucky Lake Motor Speedway in Calvert City,Ky., after blasting from the fourth starting spot to the lead on lap two. He completed the surge by passing polesitter Davey Johnson of Latrobe, Pa., who led the first lap before later bringing out caution flags on laps 15 (turn-four spin) and 20 (stopped in turn two). But McDowell’s Sanford Goddard-owned Warrior house car wasn’t quite fast enough to keep him in front.

Finishing sixth was Chub Frank of Bear Lake, Pa., who clipped the turn-four wall on lap 39 while battling for fourth with Moran. Friday's feature winner Scott Bloomquist of Mooresburg, Tenn., struggled to advance from his 21st starting spot and ended up 10th.

Six caution flags slowed the event, including incidents involving top contenders Tim McCreadie of Watertown, N.Y., and Shane Clanton of Locust Grove, Ga. McCreadie was running just outside the top 10 when he slowed on lap 14. He pitted to change his car’s left-rear tire and returned to finish 11th. Clanton, who entered the event tied with Francis for third in the points standings, had to settle for a fourth-place finish in the 2008 WoO rankings.

Jimmy Owens of Newport, Tenn., was battling Pearson for the second spot when he blew an oil line and was forced out of the race on lap 23.