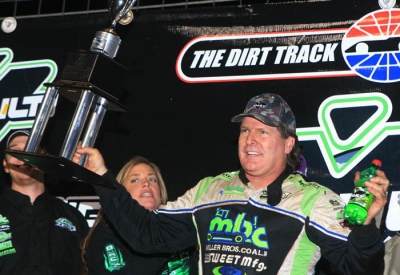 “I think I was probably as good, or better, than I’ve ever been here,” Bloomquist said after capturing the Vault World Finals opener for the second consecutive year. “I looked over to my (crew) guys to see how far ahead I was when the cautions were out, but I really didn’t feel like I needed to do that because I thought, Man, if anybody can run faster than this, then hell, they deserve it. I didn’t see how I could run much faster.”

Mooresburg, Tenn.’s Bloomquist, who turns 45 on Nov. 14, was simply in a league of his own at the 4/10-mile oval. He roared into the lead from the pole position at the start of the World of Outlaws Late Model Series event and never looked back, racing unchallenged for the entire distance in his Miller Brothers Coal Team Zero machine.

Bloomquist, who earned $10,150 for his 18th career WoO triumph but first since last year’s VAULT World Finals, crossed the finish line with a commanding 2.112-second margin of victory over Dale McDowell of Rossville, Ga. McDowell never got close to the 2004 WoO champion after taking over second place when Jimmy Owens of Newport, Tenn., retired with rear end failure on lap 43.

In a race that saw Darrell Lanigan of Union, Ky., officially clinch his first career WoO points championship when he joined the starting field, Bloomquist grabbed the attention of the evening’s huge crowd and the Speed television cameras that taped the action for telecast on 9 p.m. Nov. 8.

“The car was just super,” said Bloomquist, who drove the self-built machine that earlier this season carried him to big-money victories in the Show-Me 100 at West Plains (Mo.) Motor Speedway and the $100,000 Dirt Late Model Dream at Ohio’s Eldora Speedway. “The car rotated so sweet going in (the corners) and throttled up with as much traction as if it was a wet racetrack. I was amazed at how good it felt. I’m not even gonna touch it (before Saturday's racing at Lowe's). I can’t even think of anything I can do to improve it.”

Bloomquist recorded his fifth career Super Late Model win at Lowe's, the most of any driver in the facility’s nine-year history. He pulled one victory ahead of his protege Chris Madden of Gaffney, S.C., who had tied Bloomquist at four wins with a triumph in Wednesday night’s Armour Vienna Sausage Showdown but failed to qualify on Friday night. Not only have Bloomquist and Madden combined to win nine of the 19 Super Late Model events contested all-time at The Dirt Track, but they’re also the only two drivers with multiple victories at the speedway.

“If I can’t win it, I’d just as soon see (Madden) or any of my guys win,” said Bloomquist. “But Chris was one of the first (drivers) I’ve worked with, and I’ve never questioned him and he’s never questioned me. We have a great relationship, but I still like to be one up on him.”

Owens, who steered his Bloomquist Race Car owned by Mike Reece from the seventh starting spot to second place by lap 24, was the only driver who made even a fleeting run at Bloomquist. The 36-year-old cut Bloomquist’s margin to less than one second shortly before a lap-35 caution period for the stopped car driven by Davey Johnson of Latrobe, Pa., but couldn’t draw any closer before dropping out.

McDowell, 42, inherited second place with Owens’s departure and kept Sanford Goddard’s Warrior Chassis house car in the runner-up position for the remaining circuits. It was his best WoO finish since a runner-up placing on July 25, 2006, at Missouri’s Lebanon I-44 Speedway.

“We had a third-place car,” said the sixth-starting McDowell, indicating the break Owens gave him. “For the first six, seven laps, I felt like we were where we needed to be. Then when the racetrack cleaned off and got a groove worn in there, I was a little tight

"(Bloomquist) was a little bit better than me right across the center of the corner. I had to wait on picking my throttle up and just lost a little bit every lap. His car just stayed nice and straight and had a nice attitude. But I can’t complain,” added McDowell, who finished third in Wednesday night’s Showdown. “We’ve exceeded what we wanted to do coming here.”

The most intense racing late in the distance was waged between Babb and McCreadie, who ran together through the top 10 over the final 15 laps. Both drivers made impressive rallies to secure their top-five placings. Babb, 34, started fourth, but he slipped high in turn two on lap 11 and fell out of the top 10. He finally reached third place on a lap-43 restart and kept his Bowyer Dirt Motorsports Rocket car ahead of McCreadie the rest of the way.

After a close second-place finish in Wednesday night’s Showdown, Babb knocked on the door to Victory Lane again. “Maybe the third time will be the lucky charm and we’ll get one tomorrow night,” Babb said.

McCreadie, 34, saw his night become more difficult during his heat race when he clipped one of the foam markers lining the inside of the track. The contact bent the left-front nosepiece of his Sweeteners Plus Rocket car and he lost the final transfer spot to Mike Balzano of Parkersburg, W.Va., on the last lap. While McCreadie came back to win a consolation race and charged from his 10th-row starting spot to finish fourth, he wasn’t satisfied.

“The damage I got in the heat put us behind for the whole night,” said McCreadie. “We had a real good car. I don’t know if we would’ve been able to run with Scott, but I would’ve liked to start further up to at least try.”

Six caution flags slowed the event, but none were for serious incidents.

Richards vaulted from fourth to second in the WoO standings with just Saturday's 50-lapper remaining thanks to the misfortune suffered by Steve Francis of Ashland, Ky., and Shane Clanton of Locust Grove, Ga. Francis, whose reign as WoO champion ended with Lanigan’s clinching on Friday night, didn’t even complete a lap in the A-Main. He pulled his Beitler Motorsports Rocket to the pit area after the four-wide pace lap due to a busted transmission. Clanton, who entered the night third in the WoO standings just six points behind Francis, appeared primed to overtake Francis as he settled into fifth place in the A-Main. But distributor problems in his RSD Enterprises Rocket car forced him to retire on lap 23, leaving him in a tie for third in the points standings with Francis.

Lanigan, 38, experienced a frustrating night, but he nonetheless secured the $100,000 WoO points crown by starting the A-Main. A faulty fuel regulator during heat action forced him to use a provisional to gain entry to the headliner and he quietly advanced from the 25th starting spot to finish 11th.

“I’m happy,” Lanigan said when asked for his emotions after clinching the title, “but mostly I’m relieved. I don’t have to worry about the points anymore.”

The Vault World Finals continue on Saturday with the second and final night of WoO Late Model and sprint car activity. Hot laps are scheduled to begin at 5:30 p.m. with racing getting the green flag at 6:30 p.m. Saturday’s action will be televised live by the Speed cable network from 8-11 p.m. Eastern.