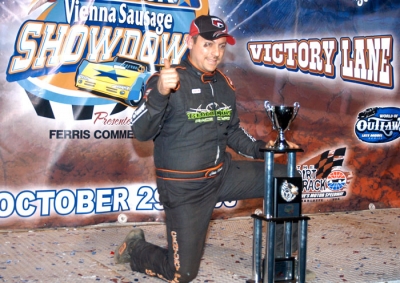 After seeing his once-commanding lead in the 50-lapper wiped out by several late caution flags, Madden had to hold off a stirring challenge from Shannon Babb of Moweaqua, Ill., to capture the first-ever World of Outlaws Late Model Series event run topless as teams shed the car's fiberglass roofs. Madden, 33, beat Babb to the finish line by a scant 0.077 of a second and pocketed $16,150, including a $6,000 bonus for winning from the sixth starting spot.

It was both Madden’s fourth career win on the WoO and at The Dirt Track, which drew a massive 81-car field for the midweek special postponed by rain Oct. 8.

Dale McDowell of Rossville, Ga., who started seventh, finished third in Sanford Goddard’s Warrior house car after racing in second place from lap 21 until Babb glided by on a lap-43 restart. It was the former tour regular’s second top-five finish in three 2008 WoO A-Main starts.

Scott Bloomquist of Mooresburg, Tenn., advanced from the 12th starting spot to place fourth in his Team Zero machine, while Shane Clanton of Locust Grove, Ga., made a steady march forward from the 21st starting spot to complete the top five in the RSD Enterprises Rocket.

Madden, who started sixth but was in the lead for good by lap five after overtaking early pacesetter Tim Fuller of Watertown, N.Y., built a full straightaway edge during a green-flag stretch from laps 4-28. But five of the race’s six caution flags flew between laps 28 and 43, dulling Madden’s momentum and allowing Babb to mount a last-ditch bid.

“All those cautions killed us,” said Madden, who drove a Cornett-powered Bloomquist Race Car. “I was hoping it was gonna stay green so we could keep our comfort zone. We had really gotten away from everyone – at one point I could even see Babb (on the same straightaway). But those double-file restarts (in place for the entire distance by event rules) just kept bunching us up.”

Madden soon found himself with company on his rear bumper in the form of Babb, who came alive after the halfway point. Babb, who started 14th in NASCAR Sprint Cup star Clint Bowyer’s Rocket car, blasted around the outside of the 4/10-mile oval on a lap-42 restart to skip from fifth to third, and then he passed McDowell for second on another restart one circuit later.

“When I saw (Babb’s) number up on the (score) board, I knew he was gonna be up on the top (lane) and hammer down,” said Madden. “The racetrack was good and wide, and I knew if he running up there it was gonna be a good race.”

Babb, 34, saw his hopes of winning the Showdown for the second consecutive year fall short in heartbreaking fashion. He also lost a chance at a $24,000 payday. A Babb victory under the race’s unique bonus system — if pre-entered by Sept. 13, the winner was eligible to receive a bonus equal to $1,000 multiplied by his starting position — would have added $14,000 to the base first-place purse of $10,000.

“If we would’ve made a zig and a zag at the right time, we would’ve been alright,” said Babb. “But I can’t really complain. We had a few lucky breaks to get us up there, like having the cautions come out to stick me where I needed to be. We were a long way back there at one time, so we made up a lot of ground. There just weren’t enough laps.”

The four-day festival of speed at The Dirt Track continues on Thursday (Oct. 30) with the opening night of the Vault World Finals, which pairs the WoO with the Advance Auto Parts World of Outlaws Sprint Car Series in a spectacular doubleheader.