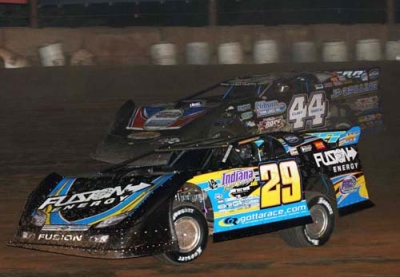 Lanigan (29) has all but wrapped up the WoO crown. (Todd Battin)

While Union, Ky.’s Lanigan will march toward the official clinching of his first career WoO crown during a busy week of racing that includes two Vault World Finals features and the postponed Armour Vienna Sausage Showdown rescheduled for Oct. 29, three drivers separated by just 26 points will fight to secure the runner-up spot in the final points standings.

Defending WoO champion Steve Francis of Ashland, Ky., enters the season-ending burst of action with a precarious hold on second in the standings. He leads the red-hot Shane Clanton of Locust Grove, Ga., by six points and 20-year-old Josh Richards of Shinnston, W.Va., by 26 points.

With Francis, 41, already conceding his reign as WoO champion to Lanigan, he certainly doesn’t want to fall below second in the points standings and see more money slip through his fingers.

“Darrell has just had a great year — the kind of year we had last year, where everything seemed to go our way,” said Francis, who trails Lanigan by 150 points but leads the tour with six victories. “We’re just trying to hold on to second. The points are a little closer now than we’d like, though, because we dropped out (in the last WoO event on Oct. 7 in Fayetteville, N.C.).”

Francis, who celebrated his 2007 WoO title on The Dirt Track’s stage at the conclusion of last year’s inaugural Vault World Finals, has a proven track record at the blazing-fast, 4/10-mile oval. Earlier this year he drove his Dale Beitler-owned Rocket car to victory in the track’s WoO Circle K Colossal 100, bringing him a $50,000 prize.

Clanton, 33, brings the most momentum into the Vault World Finals. Over the past two months he’s won three WoO races and finished second in two other events, pulling him to within six points of Francis. After spotting his rivals nearly 100 points when he dropped out of the first two events of the WoO season at Florida’s Volusia SpeedwayPark, Clanton has made an impressive rally that has him in reach of matching his career-best tour points finish of second, in 2006.

“We’re working hard to try and get second (in the points),” said Clanton, whose late-season surge includes a star-making victory in the World 100 at Eldora Speedway in Rossburg, Ohio. “That would be a real good finish for us considering the setbacks we had. If I had back those two races in Florida and the Canadian race (a 26th-place finish on July 12 at Estevan, Saskatchewan, thanks to a first-lap accident), I could be right there battling for the championship.”

Richards, meanwhile, is already virtually assured his career-best finish in the WoO points standings — a sixth in 2007. But the tour’s 2005 Rookie of the Year would like to ascend all the way to second to top off a season in which he’s established a personal single-season win standard with five WoO victories. The rising young star known as Kid Rocket will arrive at Lowe's having won the tour’s last event Oct. 7 at Fayetteville. He broke out of a checkered-flag drought that had stretched from late-June with his stirring march to victory from the 18th starting spot.

“This has just been Darrell’s year and I’m real happy for him,” said Richards, whose father and car owner, Mark Richards, builds the Rocket Chassis machines that Lanigan also campaigns. “We’re just trying to finish right behind him. Winning (at Fayetteville) gives us a chance.”

Behind the battling trio, Chub Frank of Bear Lake, Pa., appears to have a solid hold on fifth place in the standings. He trails Richards by 64 points and leads sixth-place Shannon Babb of Moweaqua, Ill., by 74 markers.

Sixth place is up for grabs, with Babb leading Rick Eckert of York, Pa., by eight points and Clint Smith of Senoia, Ga., by 36 points. Tim Fuller of Watertown, N.Y., is virtually locked into a ninth-place finish and Vic Coffey of Leicester, N.Y., who will be recognized as the 2008 WoO Rookie of the Year, is in possession of the 10th and final cash-paying points position.

Lanigan, 38, will clinch the championship by entering Wednesday's race (which offers only show-up points) as well as entering the two rounds of Vault World Finals qualifying on Thursday night and starting Friday night’s A-Main.

The Vault World Finals kick off Oct. 30, with Thursday's qualifying night for the WoO and Advance Auto Parts WoO Sprint Car Series. Two rounds of time trials — one to line up Friday night’s heats, one to line up Saturday night’s preliminaries — will be conducted, as well as a Vault Dash for Cash for both divisions and the Integra Shocks Crew Chief Challenge for Late Model teams.

Complete programs of heats, consolation races and features will highlight the cards on Friday and Saturday. The WoO standouts will chase a first-place prize of $10,000 in each feature.

Adding more luster to the Vault World Finals, the Armour Vienna Sausage Showdown will kick off the four days of competition on Oct. 29. Postponed by rain on Oct. 8, the Showdown will be the first race in WoO history to be run topless — without the fiberglass roofs on the cars — and offers a unique passing bonus that could push the first-place prize of the 50-lap feature to as much as $30,000.