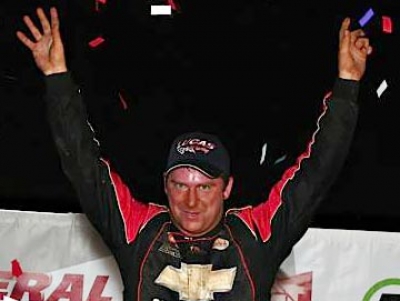 WOODSTOCK, Ga. (Oct. 4) — Inheriting the lead after a controversial ruling and disqualification of polesitter Scott Bloomquist, 12th-starting Shannon Babb of Moweaqua, Ill., led the final four laps at Dixie Speedway for his third career victory in the Dixie Shootout. The season-ending victory on the Lucas Oil Late Model Dirt Series paid $15,000 to Babb, who was running third when Jimmy Owens and Bloomquist tangled battling for the lead in turn two. | Slideshow

"I first came here in 1998 with Hav-A-Tampa. It's a neat little racetrack and obviously I really like it. It feels good to come back here and win again and for (car owner) Clint (Bowyer)," said Babb, recognizing the incident that elevated him to the lead in the 50-lapper's late stages. "That turn one is action-packed and you go in there as hard as you can, I'm not sure what happened. They were racing hard and fortunately for us it ended up in our favor."

Bloomquist officially led the first 46 laps, but Owens and Babb were providing challenges aplenty in the late stages. Owens got a strong run on the outside into turn one with four laps remaining and edged just ahead of Bloomquist as they battled tightly into turn two. Owens lost the handle and spun his No. 20 while Bloomquist slowed to a crawl to avoid contact as Babb zipped around the outside. Officials ruled that Bloomquist's car came to a stop, requiring him to go to the tail of the field as being among those involved in the caution.

Bloomquist refused to go to the tail and was eventually black-flagged and disqualified. "I'm in the car, I know I didn't stop," the four-time Shootout winner said. "Everyone else, including Jimmy Owens, said I didn't stop."

The final restart came with Babb out front and he closed out his rich victory with Bart Hartman of Zanesville, Ohio, chasing him to the finish. Dan Schlieper of Sullivan, Wis., was third followed by Justin Rattliff of Campbellsville, Ky., and Billy Drake of Bloomington, Ill.

Bloomquist led from the outset with Josh McGuire of Grayson, Ky., holding second a few laps before Don O'Neal of Martinsville, Ind. — driving the No. 16 normally driven by Rattliff — took the runner-up spot on lap three. Three early cautions kept the field bunched and Chris Madden of Gray Court, S.C., moved into contention, taking second from O'Neal on the 11th lap. But Madden's run quickly ended as his overheating car forced him out a few laps later, and three more quick cautions — nine yellow flags in all slowed the race — kept things close.

Hartman inherited second with Madden's departure but Owens was beginning his charge, taking third from O'Neal by the halfway point as Bloomquist moved into lapped traffic a few laps later. Owens went around Hartman for second on the 32nd lap and began chasing Bloomquist while Babb reached the third position by lap 36.

Sixth-running Billy Moyer of Batesville, Ark., slowed in turn four to draw a caution, and Owens turned up the heat on Bloomquist following the restart with Babb poised just behind them.

The high-running Babb took second from Owens on lap 42, but Owens worked back under Babb a few laps later to set up the dramatic finishing sequence. Owens retired after the late tangle with damage to the right front of his car and ended up 14th.