Clanton redeemed with WoO victory at the Gap 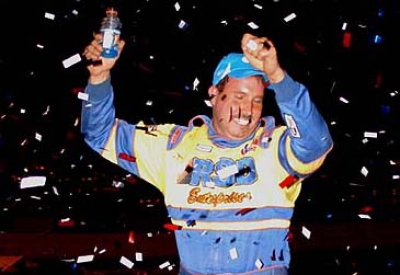 BULLS GAP, Tenn. (Aug. 21) — Shane Clanton wasn’t about to suffer the same fate twice. Twenty-four hours after having a victory slip through his fingers thanks to some problems with lapped traffic, Clanton made all the right moves to capture the 60-lap World of Outlaws Late Model Series feature that closed the fifth annual Scorcher presented by Alltel Wireless at Volunteer Speedway. | Slideshow

Clanton, 32, of Locust Grove, Ga., slipped by Chris Madden of Gaffney, S.C., to take the lead on lap 19 and never looked back. He repelled several challenges from Madden and survived some hairy moments racing with slower cars to post his second WoO triumph of the 2008 season.

“I know I should’ve won the race last night, but what do you do?” said Clanton, who settled for a third-place finish in Wednesday's Scorcher opener after losing the top spot to eventual winner Jimmy Owens of Newport, Tenn., while negotiating slower traffic on lap 50. “Lapped cars dictate the race most of the time — especially at this place — and if you don’t choose the right line, you’re not gonna win the race. Last night we chose the wrong line and tonight we chose the right line. Hopefully tonight pays for last night.”

Clanton certainly picked the best night to win. The booty for his eighth career WoO victory was $11,150, including a $1,000 bonus from Alltel Wireless. Alltel Wireless put up a total of $4,000 in bonus money on Thursday night, divided evenly between the top-five finishers and five fans paired with them by a random distribution of marked Alltel hats.

Brady Smith of Solon Springs, Wis., finished second, worth a $400 bonus from Alltel. He crossed the finish line 0.930 of a second behind Clanton after sliding into the runner-up spot on lap 57 when Madden slapped the outside wall between turns one and two. Tim Fuller of Watertown, N.Y., placed a close third, pocketing an extra $300 from Alltel. WoO points leader Darrell Lanigan of Union, Ky., was fourth ($200 from Alltel) and the polesitting Madden settled for fifth (worth $100 from Alltel) after leading laps 1-18 and running second until three laps remained.

Clanton, who started second, executed his takeover of the lead in much the same way he lost the top spot on Wednesday, seizing the moment when the pacesetter lost his momentum.

“When (Madden) got to lapped traffic and they wouldn’t move, he slid just a little bit off turn four and pushed,” said Clanton, recalling the 19th lap. “I stuck it in there (on the inside off turn four) and passed him getting into turn one. Then I got to lapped traffic and had to let up, and I looked over and saw him beside me again. I was like, ‘Oh, man, I just gotta get back to running my line.”

Memories of a disappointing defeat the previous evening continually flashed through Clanton’s head as he fought to steer his RSD Enterprises Rocket No. 25 past slower cars on the high-banked, 4/10-mile oval.

“When we got to lapped traffic and I couldn’t get by them, I said to myself, ‘Man, I know he’s gonna roll me on the outside. He’s got to,” Clanton said of Madden. “But I moved up a little bit and got loose, so I figured, ‘If I can’t pass them, I don’t think anybody can pass me.’ I knew I had an awful good car, so I just said, ‘Keep your rhythm here, keep your pace, and keep your distance from the lapped car. When you get wide open, you just spin the tires.’”

Madden, 33, got his Bloomquist Race Car close enough to threaten Clanton several times during the 34-lap stretch of green-flag racing that closed race. But his last-ditch bid to regain command from Clanton fell short when he skated high between turns one and two on lap 57 and slapped the steel guardrail, costing him three positions.

“I was better than (Clanton) in (turns) three and four, so I thought if I could be on his bumper coming off two I’d have a chance to pass him at the other end,” said Madden, who won last year’s 100-lap Scorcher. “I went in one and two as hard as I could to try and get on his bumper, but I got too high, hit the wall, and that was it. I didn’t come here to run second, so I tried to do something to win the race.”

It was Clanton who made the winning moves, giving him a milestone triumph at Volunteer Speedway. “I’ve heard about this racetrack for my whole career,” said Clanton, who reached Victory Lane for the first time at the track. “Everybody’s always said, ‘You gotta win at The Gap,’ so it’s pretty exciting to finally get one here.”

Smith, 31, never had a chance to bid for the lead after sliding his Amsoil Bloomquist Chassis car into second place with three laps remaining. He would have liked a few more circuits to play with. “I feel like I would’ve been able to give (Clanton) a run,” said Smith, who started fifth. “We were a tenth (of a second) quicker than he was when we got to second, so I think we could’ve gotten up to him in a few more laps. But getting to him and passing him would have been two different stories.”

The 40-year-old Fuller started fourth and ran in the top five for the entire distance, quietly chugging to a turnaround finish in his Gypsum Express Rocket car. His third-place run came one night after he dropped out early and finished 24th. “The only thing we did different from last night was run different compound tires in time trials,” said Fuller, who qualified seventh-fastest and started fourth in the A-Main. “What helped us the most tonight was the track getting black and slick and slowing down. I like it when it gets slicker because you need less motor.”

Lanigan, meanwhile, continued his relentlessly-steady march toward the 2008 WoO championship, advancing from the 10th starting spot to finish fourth in his GottaRace.com Rocket. It was his series-best 21st top-five finish in 34 series races. With Steve Francis of Ashland, Ky., finishing ninth, Lanigan extended his points lead, to 146 markers, at a track that he doesn’t consider one of his best.

“To come out of here with a top-five, I’m happy,” said Lanigan, 38. “I’ve never been very good here, so to actually run pretty good and gain some more points on Francis is real satisfying.”

Finishing in positions 6-10 were Scott Bloomquist of Mooresburg, Tenn., whose charge from the 15th starting spot stalled at sixth place with just over 20 laps remaining; Billy Ogle Jr. of Knoxville, Tenn., who earned the $500 WoO bonus as the highest-finishing driver who has never won a tour event and isn’t ranked among the top 12 in the points standings; ninth-starter Tim McCreadie of Watertown, N.Y., who climbed as high as sixth before losing two spots on lap 21 when he became boxed in behind the slower car driven by Vic Hill of Morristown, Tenn.; Francis; and Eric Jacobsen of Sea Cliff Beach, Calif., who was behind the wheel of the fourth Bloomquist Race Car in the top 10.

Just two caution flags — on lap one for Hill’s turn-four spin and lap 26 for the stopped car driven by Chad Ogle of Sevierville, Tenn., who was running sixth when he ran into trouble — slowed the feature.

Tommy Kerr of Maryville, Tenn., recorded his first career fast time honor with the WoO, leading all qualifiers with a lap of 12.879 seconds. He drove his backup Rocket car after his primary machine was sidelined by mechanical trouble on Wednesday night.

NASCAR Sprint Cup Series star Ryan Newman was an addition to Thursday night’s field driving the Alltel No. 12 from the stable of Steve Francis Racing. He was added to the A-Main and finished 21st after managing to continue racing following a 360-degree spin in turn two on lap 44.

Opening night winner Jimmy Owens was unable to duplicate his success. His night ended early when his car was sidelined by a blown motor during his time-trial run.