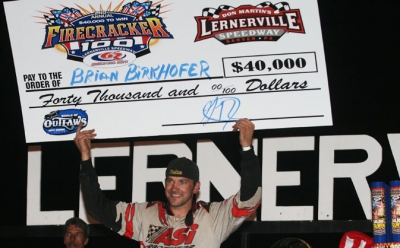 SARVER, Pa. (July 29) — Brian Birkhofer might hail from Iowa, but he had plenty of like-minded individuals to celebrate with after winning Tuesday night’s second annual Firecracker 100 presented by GottaRace.com at Lernerville Speedway. The 4/10-mile oval in western Pennsylvania, after all, is always crawling with Pittsburgh Steelers fans — and no one loves the NFL team more than Birkhofer, whose black racing helmet sports the familiar Steelers logo. | Slideshow

“This is a big deal for me,” said Birkhofer, who pocketed $41,419 (including lap money) for his first-ever victory at a track that’s located a short drive from the Steel City. “I’ve won big races before, but this one has some extra special meaning because this place is so close to Pittsburgh. I usually come out here a couple times a year to see Steelers home games, so it’s cool to finally win a big race out in this area.

“The only thing that could’ve topped off tonight was if somehow Troy Polomalu (the Steelers’ star safety) was here to present me the trophy,” he added with a smile — not long after waving a Steelers Terrible Towel in Victory Lane.

Birkhofer, 36, of Muscatine, Iowa, employed a patient approach to capture the postponed World of Outlaws Late Model Series event, which had its final night of action rained out on both June 28 and 29. He calmly filled the role of pursuer until turning up the wick halfway through the feature, passing defending WoO champion Steve Francis of Ashland, Ky., for second on lap 50 and points leader Darrell Lanigan of Union, Ky., for the lead on lap 70.

Lanigan, who led laps 1-69 after starting from the outside pole, finished a distant 4.226 seconds behind Birkhofer in second place. Shannon Babb of Moweaqua, Ill., advanced from the 13th starting spot to place third, with Francis settling for fourth and three-time WoO titlist Billy Moyer of Batesville, Ark., placing fifth after overtaking Chub Frank of Bear Lake, Pa., on lap 97. Driving his Daufeldt Transport Mars Car, the driver known as Birky simply waited until the time was right to make his move.

“I had a long-race car,” said Birkhofer, who recorded his third triumph of the season and the seventh of his career on the series. “I was just trying to maintain for the first half of the race and not wear the tires out, so if there was a late caution I could fire back up again.

“I’ve watched Scott Bloomquist (the winner of the inaugural Firecracker 100 in 2007) do it in a lot of 100-lap shows — just sit there and bide his time, and then at the end of the race he’s won again. I was able to do that tonight.”

Birkhofer, who started fourth, carefully measured Lanigan’s GottaRace.com Rocket machine before sweeping by on the inside to assume command for good with 30 laps remaining.

“I saw how he was driving the car,” Birkhofer said of Lanigan. “He had to drive the wheels off of it up there on the cushion, so I just figured, ‘He’s gonna have to keep making good laps to stay up there,’ which isn’t easy. Me personally, I know I couldn’t make that many perfect laps if I had a guy right there running second.”

Birkhofer was dominant once in front, pulling away to a commanding advantage during the 39-lap stretch of green-flag racing that closed the 100. His harder-compound Hoosier tire selection proved to be perfect for the event’s late stages. “It was kind of a tire game for a couple hours before the feature,” said Birkhofer, who finished a quiet 13th in last year’s Firecracker 100. “I made my (compound) decision in hot laps and just stuck with it. You gotta have a car that can handle the tires too, but I think our tire choice was a big key to our success.”

Lanigan, 38, would certainly agree. He was clearly frustrated with the performance of his tires after leading 69 laps but falling short of a signature win for his amazingly steady season on the WoO. “We ran (the tires) you normally run here,” said Lanigan, shaking his head as he glanced at Birkhofer celebrating in victory lane. “These 1425s (Hoosier tires) almost always work here, but (Birkhofer) had on a little harder tire and that was the difference. He could stick a little better on the bottom and the middle. I just got too loose — tire-loose. About halfway through the race I knew I was in trouble. I was sliding too much getting in (the corners) and I had to run the top.”

Though $2,467 in lap money boosted Lanigan’s runner-up earnings to a robust $17,667 and his points lead continued to grow, he craved a victory. “Any time you get up there and lead more than 50 laps, falling back to second kind of hurts,” said Lanigan. “You’d almost rather run second the whole race and not win it.”

Babb, 34, made a strong charge forward in his Traeger Grills-Chevy Rocket owned by NASCAR Sprint Cup star Clint Bowyer, reaching third place on lap 59. He never seriously threatened Lanigan for second, however. “We passed some real good cars to get up there, so we’re happy,” said Babb, who did not enter last year’s Firecracker 100. “As the race wore on I got a little too tight, so I was just trying to maintain at the end.”

The 40-year-old Francis also suffered from a slight tight condition with his Dale Beitler-owned Reliable Painting/Valvoline Rocket. He challenged Lanigan for the lead just before the halfway mark, but he steadily lost ground over the race’s second half and crossed the finish line nearly eight seconds behind Birkhofer in fourth place. Moyer, 50, was almost five seconds in arrears of Francis at the checkered flag in fifth place. He started ninth in his Victory Circle mount and ran around that spot for nearly three-quarters of the race before making a late surge.

Finishing in positions 6-10 were Frank, who reached fifth on lap 66 but couldn’t move any higher; Bloomquist, who earned the race’s $100 Hard Charger Award for improving from the 20th starting spot but made little headway for the final 80 circuits; Tim McCreadie of Watertown, N.Y., who raced as high as sixth; Earl Pearson Jr. of Jacksonville, Fla., who ran in the top five for the first half of the 100; and Tim Fuller of Watertown, N.Y.

Four caution flags slowed the event, including a lap-19 incident that effectively ended the hopes of pre-race favorites Josh Richards of Shinnston, W.Va., and Shane Clanton of Locust Grove, Ga. Richards, who started from the pole position, made contact with Clanton in turn one as the pair battled for third place. The two cars hooked together and slid to a stop at the top of the track.

Clanton, who had just pulled a slide job on Richards in turn four to nose ahead for a moment, angrily climbed out of his car at the accident scene and leaned into Richards’s cockpit to offer his thoughts about the tangle. The two drivers exchanged words again after Richards exited his car. “I wanted to bump him in the back and just let him know I didn’t appreciate" the pass, admitted the 20-year-old Richards. “But my right-front wheel just caught his left-rear tire. It climbed up the side of his car and couldn’t come back down off it, and I ended up taking us both out.”

Richards continued to finish 12th, while Clanton raced on with left-side bodywork damage until retiring on lap 61 after he rode the homestretch wall. Clanton, 32, refused to comment on the tangle or his discussion with Richards. “Up until the accident I had a real good car,” said Clanton, who started fifth. “Then I hit the fence and took myself out. I was trying too hard.”

A huge crowd turned out for the completion of the Firecracker 100 weekend, which began on June 27 with a thrilling night of heat-race competition for 62 cars. Jeremy Miller of Gettysburg, Pa., was the only qualified driver who did not return on Tuesday night. He was forced to skip the event after suffering a rash of engine problems in the preceding days.

After contesting 13 events in eight states and one Canadian province over the past 20 days, the WoO will be idle for more than two weeks. The tour’s next action is a Southeast doubleheader on Aug. 15 at Fayetteville (N.C.) Motor Speedway and Aug. 16 at Screven Motor Speedway in Sylvania, Ga. — Kevin Kovac

Seventh-starting Mike Knight of Ripley, N.Y., overtook Ron Davies just before the midpoint and went on to a victory in the Uncle Sam 30 worth $3,000. Davies fell back to third after losing the lead before rallying at the finish, but not enough to pressure Davies. Boom Briggs was third followed by Brent Rhebergen and polesitter Dave Hess Jr. The race had a lengthy delay on the eighth lap when Dutch Davies slipped off the backstretch and rolled. He wasn't injured. Davey Johnson was scheduled to start on the pole, but he scratched.

David Scott led virtually the entire race from outside the front row for a 20-lap victory. He transfers to the main event along with fourth-starting Rick Eckert and Vic Coffey who rallied from the seventh row. John Mollick made a last-lap pass of Davey Johnson to grab the fourth and final transfer spot. Besides the third-starting Johnson, several drivers lost good opportunities to transfer. Robbie Blair was running fourth when a lap-10 flat tire forced him to pit. Polesitter Doug Horton and Dutch Davies got together in turn four on a lap-13 restart. Davies spun and had to restart on the tail while damage to the front of Horton's car hampered him the rest of the way.

Fifth-starting Scott Bloomquist moved past outside front-row starter Matt Lux on the 13th lap and went on to a 20-lap victory. Dan Stone, who started eighth, went from fourth to second on laps 15-16 and finished in the runner-up spot while Lux held on for the final transfer spot ahead of Ron Davies. Polesitter Jimmy Owens led the first few laps, but he spun over the top of turn four after a stuck throttle hampered him. He pulled to the pits for brief repairs but returned to the track to less than a full lap. Fourth-starting Keith Barbara faded to finish eighth while tail-starting Boom Briggs rallied to finish fifth.