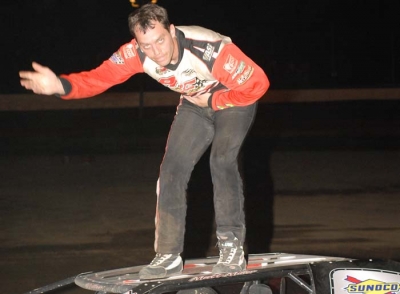 WAUSEON, Ohio (July 12) — Rebounding from a terrible qualifying lap, sixth-starting Matt Miller of Waterville, Ohio, overtook Jeep Van Wormer of Pinconning, Mich., with 20 laps remaining at Oakshade Raceway and went on to capture the points finale on the UMP DIRTcar Summernationals. Miller earned $10,000 in finishing a full straightaway ahead of Van Wormer in the 60-lapper at the 3/8-mile oval where he grew up racing. | Oakshade notebook | Complete Summernationals coverage | Slideshow

"We set up for the long haul," said Miller, who won the second Summernationals race of his career. "Early on, I wasn't too happy. Until that track blew off, we were just OK. But when it blacked up and Jeep got into the lead and on the restart I went to the middle there, and ran up on him, I knew we had something for 'em."

After the race, Miller was joined in victory lane by Dennis Erb Jr., who clinched his second consecutive Summernationals championship by virtue of a third-place finish. Although Erb led by a mere four points entering the event, there was no dramatic ending as Brian Shirley's chances at overtaking Erb ended when his fan blade broke his radiator as he tried to rally from his 19th starting spot. Erb earned $25,000 for the championship of the month-long tour while Shirley collects $10,000 as the runner-up.

Doug Drown of Wooster, Ohio, who started 18th, rallied to finish fourth and Casey Noonan of Sylvania, Ohio, was fifth. Wes Steidinger of Fairbury, Ill., who finished third in Summernationals points, started on the pole and led the first 34 laps before a broken driveshaft knocked him out of the race.

Van Wormer closed within a few lengths of Steidinger amid lapped traffic on lap 25, but Steidinger stretched his lead again before sparks flying from underneath Steidinger's car signaled his driveshaft failure, bringing out the race's first caution. Van Wormer inherited the lead with Miller and Davis in tow, but Davis spun in turn two a few laps later to fall from contention.

Miller went to work on the higher-running Van Wormer on the next restart, staying right with the leader. With about 20 laps remaining, Miller made an inside move entering turn three, pulled even and edged ahead out of turn four. A caution appeared a lap later when Shirley's car stopped on the backstretch, but on the final restart, Miller took off, built a full straightaway lead by lap 45 and cruised the rest of the way. Van Wormer briefly lost the second spot to Erb on the final restart, but he fought back past on lap 46 and held on for his second consecutive runner-up finish on the Summernationals.

Miller's qualifying time of 18.239 seconds was two and a half seconds off fast time, but he recovered to finish second in his heat race, earning the sixth-starting spot for the feature, where he started his winning run.

Polesitter Rody Schroyer cruised to a B-Main victory while Ky Harper and Dusty Moore won C-Mains. Brad Eitniear's car did a slow rollover in the B-Main after he was collected in a spin by Steve Sheppard Jr., but he wasn't injured.

Third-starting Kris Patterson took advantage of a shaky start by polesitter Jon Henry and cruised to an easy 10-lap victory. Sixth-starting Zac Davis got the high side working midway through the race to work his way into second while Henry, making just his third career Late Model start, steadied his car to finish third. Dan Wallace got too high in turn two on a restart and fell out of contention for a transfer spot. Fourth-starting Ryan Unzicker got together with Henry on the first start attempt, forcing a complete restart. Another caution appeared on the third lap when Dean Anderson and Bob Dean spun together in turn three.

Wes Steidinger became the first driver to win a heat race from the pole as he outran fourth-starting Ronnie Perrine Jr. in the third 10-lap prelim. Perrine nearly got inside the winner on a mid-race restart, but Steidinger held on to win by several lengths. Perrine, though, had his hands full with front-row starter Zack Olger, who worked on Perrine through the race's late stages before slipping by for second exiting the final corner. Perrine got the third and final transfer spot while Brad Eitniear was fourth. The race was slowed by a single early caution for a slower car slipping off the turn-two banking.

Dennis Erb Jr. outdueled polesitter and fellow front-row starter Casey Noonan on the first lap, then held off a challenge over the final laps from Matt Miller, who started deep in the field. Miller ended up a few lengths behind in second while Noonan was further back in grabbing the third and final transfer spot. Rusty Seaver ran with Noonan but never took a serious shot at the third spot in the caution-free race. Aaron Scott scratched with engine problems.

Starting outside the front row, Jeep Van Wormer got the jump at the outset and cruised to a 10-lap victory over seventh-starting Jason Feger. Polesitter Jason McBride faded but held on to the third and final transfer spot over Rody Schroyer. Brian Shirley, who startedï¿½in the last row, rallied to finish fifth and earn a spot in the B-Main.

Jason McBride of Carbondale, Ill., was fastest among 49 qualifiers at Oakshade Raceway in finale of the UMP DIRTcar Summernationals. McBride, one of a handful of drivers who have attended every event, will start on the pole of the first heat race after clocking a lap of 15.794 seconds at the 3/8-mile northern Ohio oval. Other heat race polesitters, according to group qualifying: Casey Noonan, Wes Steidinger and Jon Henry.

Series observers are keeping a close eye on the only two drivers with a chance to win the championship. Dennis Erb Jr., the reigning series champion, goes into the race with a four-point lead over Brian Shirley. Erb will start on the front pole of the second heat race. Shirley struggled in qualifying and will start on the last row of the first heat.

Up for grabs after the final points race tonight is the $25,000 Summernationals championship. The runner-up receives $10,000, third $7,000 and fourth $5,000. ... Erb can clinch the title by finishing first or second in the feature. If Shirley finishes in the top six and Erb finishes within one position of him, he'll clinch the title (the points difference among the top six spots is five apiece). The points difference between positions 7-10 is two points, and a single point for finishers 11th on back. ... The tiebreaker hasn't been decided for sure, according to UMP series director Sam Driggers. ... Jon Henry, fast qualifier in the fourth group, is coming off his first-ever Late Model victory Friday night at Attica (Ohio) Raceway Park. Henry is driving the Shane and Jennifer Halcomb car driven earlier this year by Tyler Boggs. Aaron Scott is also driving a Halcomb car.