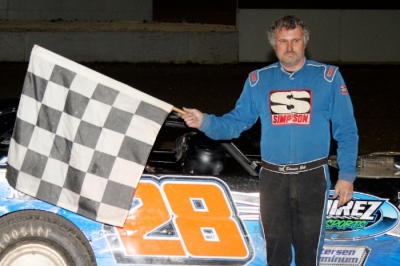 La SALLE, Ill. (March 29) — In a race were there was plenty of trouble behind him, Dennis Erb Jr. of Carpentersville, Ill., stayed ahead of the fray Saturday at La Salle Speedway for a $15,000 victory in the track’s season-opening third annual Thaw Brawl. | Notebook | RaceWire | Slideshow | Video

The former track champion slipped under polesitter Brian Shirley exiting turn four on the first lap and led all 75 circuits in a race where flat tires, rugged track conditions and assorted cautions left only four other drivers on the lead lap at the finish on a cold Illinois night.

“It was good to have a good run at the beginning and start up front and be able to able to stay out of trouble and hit the holes the right way,” said Erb, who started outside the front row. “Thank God everything held together.

“You never know what’s going to happen. I mean, in a situation like that out there, everything’s really put to an extreme test. There at the end, you have those cautions coming out and stuff, and you don’t want to hit a hole wrong there at the end of the race either. I was just glad we were able to get out front and maintain and keep everything together.”

While Erb kept it together out front an array of drivers held the second spot throughout the race, most of the them ending up finishing in the pits or back in the pack. Even eventual runner-up Bobby Pierce of Oakwood, Ill., who started 19th, was a lap down at one point before catching a break.

Pierce finished second with fellow Pierce Race Cars driver Ryan Unzicker of El Paso, Ill., in third. Scott Bloomquist had a couple of late flat tires, but because he got to restart at the tail of the short lead lap, still managed to finish fourth while Jason Riggs of Harrisburg, Ill., rounded out the top five.

“I knew Dennis was going to be great,” Pierce said. “I saw him pass me there when he lapped me — luckily I got the Lucky Dog (and put back on the lead lap) — I wasn’t sure about Unzicker and Feger, they were fast the whole race.”

In making his late move to second, "I was a little nervous getting up (on the cushion), but you know I said, 'There’s some big money for second and third, and I’m here and might as well go for it.' So I barely lifted getting into (turn) one there and luckily got around those guys and went straight back to the bottom, saving my stuff. I didn’t want to break anything on the last couple of laps to go.”

Plenty of drivers saw something break or pulled pitside with flat tires, including Iowa native Matt Furman of Columbus, Ohio, who had a lap-46 flat tire that knocked him out of second. Shirley, of Chatham, Ill., held the second spot most of the first 22 laps, but he pulled up lame on lap 22.

Shirley was also part of the race’s most serious incident a few laps earlier when he got sideways in turn four, triggering an incident that involved Unzicker, Jason Feger, Riggs and Scott Schmitt, who got the worst of the mess and was towed off the track.

All the while, Dennis Erb Jr. managed the track conditions made all the more rugged by a cold winter and heavy rain just a few days earlier. It was a nice homecoming for the driver who tours nationally.

“It’s really good to be able to come home and run good and pick up a win here,” Erb said. “I always enjoyed racing here and grew up here. You’re out on the road so much you don’t get to come back here as much as you’d like to. You’ve got a lot of fans and people here that support you and stuff, so it’s always good to come back.”

Notes: Erb’s Rayburn Race Car is powered by a Kuntz & Co. engine with sponsorship from J.R. McBride Leasing, JL Scrap Metals, Ramirez Motorsports, Petersen Aluminum, Allstar Performance and Performance Rod & Custom … Erb's previous victory came during East Bay Raceway Park's Winternationals on the Lucas Oil Late Model Dirt Series. … Erb won the inaugural running of the event in 2012. … The event is set to pay $20,000 next season and $25,000 in 2016. … Last year’s Thaw Brawl winner Brian Birkhofer debuted a new Rocket Chassis after making the switch from MB Customs over the offseason; he retired after bringing out a caution midway through the main event and finished 15th. ... Devin Moran of Dresden, Ohio, made his first-ever start in Illinois; Moran won the consolation race after being caught up in a heat race accident, but called it quits early in the main event. ... Nick Allen earned $1,500 in the UMP Modified portion of the program. … Weather postponed Friday’s preliminary event to Sunday, but it was postponed again Sunday when the track had sewer and water line problems along with mechanical problems with the grader.