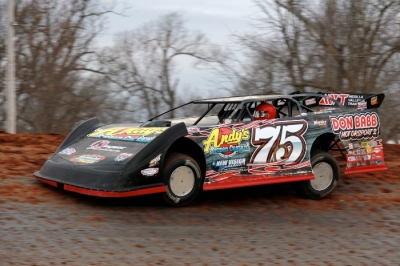 Racing just miles from his home, the 47-year-old driver roared to the lead from the third starting spot and never looked back en route to winning the 40-lap MARS DIRTcar Series March Madness event at the quarter-mile oval. | RaceWire | Slideshow

Phillips mastered the track that is so familiar to him, beating Ryan Gustin of Marshalltown, Iowa, to the finish line for a $3,000 first-place check. It was the series-leading 83rd career victory for Phillips, who owns six career MARS championships.

Notes: Phillips steers a Rocket Chassis powered by Hatfield Racing Engine and sponsored by Andy’s Frozen Custard, Mesilla Valley Transportation, Don Babb Motorsports and New Vision Graphics. … Phillips is a six-time MARS champion; his crowns came in 2000, 2004, 2005, 2008, 2009 and 2010. ... In place of the redraw, the top eight drivers in heat race passing points shot baskets to determine feature starting spots. Will Vaught, a former Missouri All-State basketball player, was the first to make a shot and earned the pole. ... Nick Lyons of Centralia, Ill., took a wild ride during the B-Main, rolling his car at the top of the track while Michael Maggard of Republic, Mo., went by on the inside with flames trailing from his car. Neither driver was injured, and Maggard later started the A-Main thanks to a provisional spot. … March Madness event was the third of 31 events on the 2014 MARS schedule. ... The series will return to Springfield on May 10 and Sept. 13.