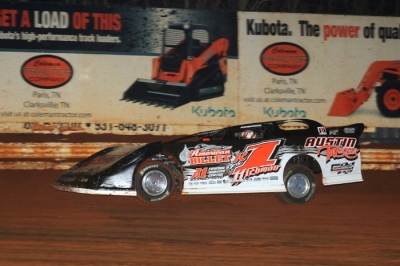 CLARKSVILLE, Tenn. (March 7) — Riley Hickman of Ooltewah, Tenn., bounced back from a couple weeks of bad racing luck, and traveled to a flag-to-flag victory in the opening feature of the MARS DIRTcar Series-sanctioned Tuckassee Toilet Bowl Classic at Clarksville Speedway, earning $3,000 for his efforts at the quarter-mile oval. | Video | Slideshow

The region was hit by an ice and snowstorm in the days leading up to the race, and snow still covered the pit area when teams arrived for the touring series' opening weekend. Runoff from melting snow created difficulties, including water that was leaking from the frontstretch wall and across the track.

"There wasn't much the track could do with the difficult weather situation they faced recently, and I'm just glad we raced," said Hickman, who lost his father to cancer just five days before winning the Cabin Fever 40 held Feb. 8 at Boyd's Speedway in Ringgold, Ga. "It's been a tough month for us, we've had some things go wrong in a couple early-season races, and this is a little icing on the cake for us. I can't complain. This win is a good deal for us, and it happened at a good time."

Hickman maneuvered quickly into the lead after winning a heat race, which put him outside the front row for the start. He jumped into the top spot and opened a comfortable advantage, but second-row starter Brian Shirley of Chatham, Ill., broke free from a torrid, multicar battle for the runner-up slot, tracked him down and was within three lengths when the second of two cautions waved with three laps remaining. Shirley managed to catch the race leader under green as the 20-lapper went without a caution flag after the first one appeared with two laps completed.

Shirley was poised to make a move on the final restart, but Hickman fended off his efforts and won by about six lengths when Shirley briefly lost traction in turn four, and fell behind the leader enough that he couldn't make up the difference with just over a lap remaining. He settled for a runner-up finish.

"The corners were real choppy, and that was due to the weather problems," Hickman said. "I didn't really know how close (Shirley) was to me before that last restart, but I knew he was probably fairly close because I heard him a couple times. We'd gotten into lapped traffic, and I tried to slow the pace of the race. I didn't feel like they'd be able to go around me, and I also felt someone would have to drive through me, or underneath me. I didn't think that would happen in those conditions.”