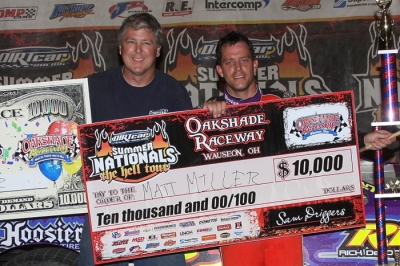 WAUSEON, Ohio (July 20) — Matt Miller of Whitehouse, Ohio, had Saturday’s UMP DIRTcar Summernationals finale at Oakshade Raceway circled on his calendar for weeks leading up to the event. But a wreck during a tune-up race at Oakshade last weekend threatened to keep Miller from competing in the $10,000-to-win event, much less winning it.

But a lot of long hours and a few late nights in the shop by the Rick Delong Racing team not only got Miller’s ride back together in time for Saturday’s action, it made nearly unstoppable. | Complete Summernationals coverage

Miller charged from the ninth starting spot in Saturday’s 60-lap race to take the lead from Jeep Van Wormer on lap 23, before dominating the second half of the race to earn his first Summernationals victory since 2008 as the month-long tour wrapped its 27th season.

“We’ve been good all year, especially when we get in slick conditions,” said Miller, who drove Rick Delong's No. 3 Rocket Chassis to his second-career victory in Oakshade's Birthday Race. “We came here last week and got tore up and had to take the car to Rocket and get it clipped. My guys busted their butts, especially Rick and Rodney and those guys, working till 1 in the morning every night. It feels good to pay them back. The car couldn’t have been any better.”

Miller built more than a half-track advantage as the second half of the race ran caution free and lapped all but the top six finishers in claiming the third Summernationals victory of his career. Jon Henry of Ada, Ohio, finished second with Bobby Pierce of Oakwood, Ill., Jeff Babcock of Bradford, Ohio and Devin Moran of Dresden, Ohio, rounding out the top five in a race slowed by three cautions. Van Wormer ended up sixth after spinning from the fourth spot in the final corner.

Brandon Sheppard of New Berlin, Ill., challenged Van Wormer for the lead early and was running third until slowing to bring out a lap-22 caution. He ended up 19th, but that was only a minor disappointment on a night when Sheppard wrapped up his first Summernationals championship just by starting the feature. The 20-year-old Sheppard earned $25,000 in becoming the tour’s youngest champion.

Competing in just his second night in Keith Berner's No. 18 MasterSbilt, the six-starting Henry took second from Van Wormer on lap 44. But Miller was already well out of sight, and Henry never got a caution to close the gap.

“Tonight was our second night ever in a MasterSbilt, so it was really awesome,” said Henry, who finished fourth in Friday’s Summernationals race at Attica (Ohio) Raceway Park in his first outing in Berner's car. “I think Matt was definitely in a different league than we were. But if a caution came out, you just don’t know.”

Making his first appearance at Oakshade, Pierce was out of reach of the series title once Sheppard took the green flag, but he closed out his first full-time Summernationals run with his 20th top-five finish in 25 races.

“We came into this deal just looking for a couple wins maybe, not really worrying about the points too much until we figured out we had a shot at it,” said Pierce, who won four races on the series. “There was a point I was behind Brandon over 100 points. Just to reel him in like that it lets us know we were doing a really good job.”

Notes: Miller’s Rocket Chassis has sponsorship from Rick DeLong Racing, Dominator Race Products, Corrigan Race Fuels, Hoosier Tire and Integra Racing Shocks. ... With an eighth-place finish, Dustin Griffin of Camp Point, Ill., wrapped up the tour’s Rookie of the Year Award. ... Provisional starter Herb Reich of Ann Harbor, Mich., had trouble getting his car started after driver introductions and was pushed to the pit area before the race went green. ... Polesitter Casey Noonan of Toledo, Ohio, led the first lap before fading to 13th at the finish. ... Wayne Chinn of Bradford, Ohio, slowed to bring out the first caution with 19 laps complete. Ryan Missler of Bellevue, Ohio, spun up the track in turn one on the restart to bring out another yellow.

Jeep Van Wormer will lead tonight's main event to green as he looks for his first Summernationals victory since 2010.Van Wormer, a former Summernationals winner at Oakshade, drew the pole in a redraw among heat race winners. Casey Noonan will start second with Jeff Babcock third. Brandon Sheppard will claim the series championship when he rolls off from the fourth spot. ... With no series regulars using provisionals, those spots went to Steve Kester, Devin Shiels, Dusty Moore, and Herb Reich. ... Brandon Sheppard has his backup car unloaded and ready in the pits. "You never can be too safe," said Sheppard, who needs only to start the main event to clinch his first series title. ... Todd Frank's rough Summernationals came to a rough end when he got caught in a heat race accident. Frank, who entered all but three races on this year's tour, scratched from the rest of the night.

Dona Marcoullier got rolling on the high side midway through the 12-lap B-main and rallied from fifth to win the race and earn the 17th starting spot for tonight’s 60-lap main event. Ryan Missler also used the top groove to move up through the field and topped Dusty Moore and Steve Kester in a late battle to also make the feature in second. Duane Chamberlain battled for a transfer spot before falling out of the race on lap five.

B.J. Gregory claimed the 10-lap C-main. He’ll be joined by Devin Shiels, Ron Miller and Rody Schroyer in transferring to the B-main.

Second-starting Jeff Babcock pulled ahead of polesitter Bobby Pierce exiting turn two on the opening lap and pulled away in the caution-free fourth and final heat. He led by nearly a straightaway at the finish, while Pierce held for second and Dustin Griffin held off repeated challenges from Brian Ruhlman to finish third. Ruhlman settled for fourth to also make the feature lineup.

Casey Noonan led every lap to claim the third heat race, maintaining a slight lead over Chris Keller the entire distance. Keller settled for a close second with Wayne Chinn third. Phil Ausra slipped by Dusty Moore midway through the race on his way to claiming the fourth and final transfer spot. A complete restart was needed when Moore, Devin Shiels, Todd Frank, and Bobby Hutchins piled up in turn two on the first attempt to start the race. Shiels and Frank pulled to the pit area.

Polesitter Jeep Van Wormer controlled the second heat, building nearly a straightaway advantage in leading every lap of the caution-free 10-lapper. Jon Henry challenged Wormer in the opening laps before settling into second. He held the spot at the finish, just ahead of Devin Moran. Chris Ross was farther back in fourth to also make the main event.

Outside polesitter Brandon Sheppard topped a three-wide battle with Doug Drown and Matt Miller in leading every lap of the first 10-lap heat race. The second-starting Sheppard edged ahead of polesitting Miller on the start before fourth-starting Drown pulled between the two front-row starters through turns one and two. The three cars raced three wide through turns three and four before Sheppard and Drown pulled ahead. Those two stayed side by side for the next lap before a lap-three caution put Sheppad out front for the restart. The top three cars again went three wide following the restart, but Sheppard edged away in the closing laps. Drown settled for second with Miller third and Rusty Schlenk in the fourth and final transfer spot.

Looking for his first UMP DIRTcar Summernationals victory in two years, Matt Miller of Whitehouse, Ohio, posted fast time during time trials for the month-long tour’s finale Saturday night at Oakshade Raceway with a lap of 15.026 seconds around the 3/8-mile oval.

Miller, who scored one of his two Summernationals victories at Oakshade, will start from the pole of the first of four heat races coming up later in the evening. Other heat race polesitters after group qualifying: Jeep Van Wormer of Pinconning, Mich.; Casey Noonan of Toledo, Ohio; and Bobby Pierce of Oakwood, Ill.

Each 10-lap heat race will transfer the top four finishers directly into the main event with the four heat winners all redrawing for their starting spots. Two more cars will make the feature through consolation races with four provisional starters rounding out the 22-car field.

Brandon Sheppard of New Berlin, Ill., leads second-place Bobby Pierce of Oakwood, Ill., by 48 points in the chase for the series championship. Sheppard, 20, will become the youngest champion ever on the tour just by starting tonight’s 60-lap main event. ... Doug Drown of Wooster, Ohio, enters the event looking for a weekend sweep after claiming his first series victory in Friday’s event at Attica Raceway. ... Former Oakshade Summernationals winner Matt Miller of Whitehouse, Ohio, is making his second appearance on this year’s tour. He finished second in his only previous start at Kankakee (Ill.) County Speedway. ... Jeep Van Wormer of Pinconning, Mich., the 2007 Oakshade winner, has switched cars after blowing an engine in his primary car Friday night at Attica. ... Neither of the past two Oakshade winners are competing tonight with last year’s winner Ryan Unzicker of El Paso, Ill., and 2011 winner Shannon Babb of Moweaqua, Ill., both skipping the event.