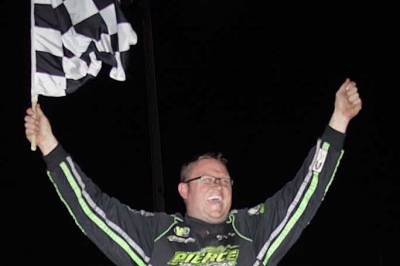 The two UMP DIRTcar-sanctioned victories came in events that were postponed by rain Labor Day weekend.

Babb outlasted Brian Shirley of Chatham, Ill., to open the night with a win in the makeup feature, surviving a heavy track surface and large cushion to score the victory.

A flat right-rear tire knocked Shirley from the lead midway through the race, opening the door for Babb and runner-up finisher Eric Smith of Bloomington, Ill. Kyle Logue of Cisco, Ill., finished third with hometown driver Aaron Ricketts and Daren Friedman of Forrest, Ill., rounding out the top five. Shirley rallied from the tail of the field to finish sixth.

Feger recovered from his 18th-place finish in the opening feature to lead the majority of the 60-lap Prairie Dirt Classic main event. He took the lead from polesitter around the lap-15 mark and turned back a number of challengers to stay out front for the remaining distance.

Surviving a restart with four laps remaining, held off a hard-charging Logue in the final laps. Logue, who won a consolation race to make the race, settled for second after using the low groove to advance through the field. Hometown driver Scott Bull was third followed by Torin Mettille of Cullom, Ill., and Mike Spatola of Manhattan, Ill.

A number of drivers fell out while running among the top five of the second feature. Schmitt slowed from the third position to bring out a caution around the 10-to-go mark, while Ryan Unzicker of El Paso, Ill., gave up second under the ensuing caution with overheating issues.

Friedman, who challenged Schmitt for the early lead after starting from the pole, moved up to second during the race’s closing laps, before slamming the wall and falling out of the race with four laps remaining.

Shirley survived an early to spin to again finish sixth, while Babb was never a factor after experiencing rear-end gear issues during his heat race.