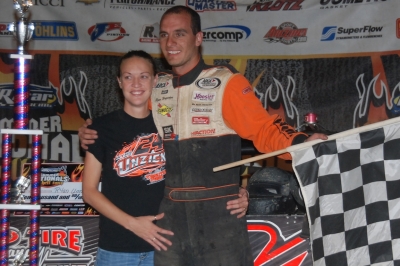 The night’s other big winner was Brian Shirley of Chatham, Ill. Although he started on the pole and faded to fifth, Shirley celebrated the $25,000 championship he clinched a night earlier at Attica Raceway Park in the second-to-last race on the grueling tour.

Sheppard, of New Berlin, Ill., settled for a disappointing runner-up finish while the 10th-starting Matt Miller of Whitehouse, Ohio, was third. Jeep Van Wormer of Pinconning, Mich., and Shirley rounded out the top five finishers in a 16-minute, caution-free race where just seven drivers finished on the lead lap.

The high-flying Sheppard built leads of a straightaway or more much of the race and led everyone but eighth-starting Unzicker by a half-track margin with 10 laps remaining, but Unzicker reeled him in during the waning laps.

While Shirley led early, Sheppard made a nifty groove-switching move to take the lead on the 12th lap, then nearly ran away from the field in the high line while Shirley, Dona Marcoullier and Matt Miller vainly tried to keep up in the early stages.

Unzicker mixed it up with Babb and Miller for several laps before clearing that duo, then quickly overhauled Shirley to grab the second spot on lap 22. He spent the next 30 laps chasing Sheppard, mostly from afar, as the blue Rocket Chassis was rolling in the high groove.

“We just hugged that bottom and we came up through there,” Unzicker said. "I didn’t know if I was going to catch him at first. I seen him out there, but once I got my rhythm down and lapped traffic, I got around a couple of people running right in my line, we reeled him in. I was just praying it was 60 laps and not 50, because I knew it was getting close.”

When Sheppard struggled with traffic in the race’s late stages, Unzicker made up ground quickly, cutting a half-straightaway lead at lap 50 down just to a few lengths five laps later. Unzicker made the winning pass and then drew away as Sheppard — unable to get around the slower Jason Feger — slipped up and got a piece of backstretch wall exiting turn two with three laps remaining.

“I don’t want to make excuses ... I don’t know. The lapped traffic was kind of racing me pretty hard there,” Sheppard said. "I saw Unzicker and I picked up the pace a little bit, and Feger was there on the outside, and (Mike) Spatola was there on the outside, and that was my preferred line. I probably should’ve tried to go down in front of Unzicker, but I didn’t know he was there.”

While no yellow flags slowed the race, it was delayed nearly an hour when rain sprinkles hit the track during intermission, picking up enough to slicken the race surface. The 22-car field abandoned its first attempt to start the race, then returned to the track about 45 minutes later to commence the nonstop finale to the month-long tour.

Shirley’s championship was somewhat anticlimactic, partly because he faded to fifth (his worst finish since July 4_ and partly because controversy over his fourth-place finish the previous night in Attica, Ohio (he kept his spot after a caution was thrown for his slowing car).

But the 31-year-old was glad to wrap up his first title on the tour after displaying consistency that three-time and 2011 champion Shannon Babb couldn’t quite match.

“I’m very proud of my team, proud of everybody — and I’m just glad it’s over,” said Shirley, who planned to celebrate his championship Sunday in conjunction with his daughter’s first birthday. “I ain’t really sunk in, but I’m sure tomorrow, once I get home it’s going to sink in that we’ve run twentysomething nights and did the best we could.”

Notes: Unzicker’s MasterSbilt Race Car is powered by a Rhyne Competition Engine and sponsored by Pro Tire & Automotive, RJR Transportation and Schumacher’s Tyre Service. ... Unzicker notched his fourth career Summernationals victory; he also won on the 2012 tour at Wilmot (Wis.) Raceway with a last-lap pass of Wendell Wallace. ... Seven cars finished on the lead lap and 19 of 22 starters were running at the finish.

Brian Ruhlman slipped under polesitter Zack Olger in turn three on the first lap and cruised to a 12-lap victory. He transferred to the main event along with Olger, Steve Kester, Kevin Reeve, Nick Bartels and Dusty Moore.

(Winners advance to tail of B-main)

Rusty Schlenk was battling for second with a left-front upper control arm broke, disabling his car; he should be in line for a UMP points provisional if necessary. ... Dan Wallace scratched after setting the third quickest time in his group. His No. 3X suffered major transmission problems after a U-joint seized up, broke the driveshaft and a lift bar. “Not good,” Wallace said, whose crew discovered the tranny woes with further inspection. “We thought we just needed to change the driveshaft and lift bar.” ... Dona Marcoullier, who starts outside the front row in the 60-lap feature, is making his second career start in a modified, winning a heat in the Dennis Craft-owned No. 70. His first start in the car paid off with a $3,100 victory at Michigan’s Cherry Raceway. He’s impressed with his Doug Finley-owned Late Model, too. “That car’s been good all year,” Marcoullier said. ... Jason McBride was leading the first heat when a faulty battery forced him to the infield. “It wouldn’t have happened if we’d have been running seventh,” McBride said. ... Brandon Sheppard turned laps in his heat race victory more than three-tenths of a second faster than quick time. ... Scott James was on hand along with Riggs Motorsports teammate Jason Riggs, but engine problems kept his No. 81 off the track.

Presumptive series champion Brian Shirley drew the pole for the main event with Dona Marcoullier, a three-time winner at Oakshade in June, starting alongside. ... Shannon Babb and Brandon Sheppard are in the second row. ... Jason Feger and Devin Shiels make up row three. ... Coming up are three consolation races for the Late Models; the winners transfer to the B-main.

Third-starting Dona Marcoullier made a nifty move on polesitter and fellow Michigan driver Alan Vochaska into turn one on the first lap, then rallied back to regain the lead from outside front-row starter Jeff Babcock at the checkers. Babcock got the only other transfer spot while Jon Henry finished just behind the top two. Vochaska faded to fourth. Marcoullier won the drag race into turn one and took control, but the higher-running Babcock edged back ahead before the midpoint. Henry threatened Marcoullier’s second spot, but Marcoullier turned up the wick and caught Babcock, making the pass the regain the lead exiting turn four on the last of 10 laps. Brad Eitniear spun on the first attempted start in turn one to trigger a restart.

In a repeat of last night's feature battle at Attica, Frank Hecknast Jr. (running high) and Shannon Babb (low) battled up front during the main event, running side-by-side much of the distance. Babb took over midway through the 10-lapper in turn three, just as Heckenast got too high and hung his car over the fourth-turn cushion before recovering to finish a half-straight back in second. Steve Kester was third in the caution-free preliml.

Outside front-row starter Brandon Sheppard slung into the lead in turn one on the first lap and never looked back in turning laps a second faster than any pursuer. Polesitter Matt Miller was in the middle of the track with Andrew Reaume down low exiting turn two on the first lap, but Sheppard was too much for both of them in pulling away. Miller finshed a distant second for the only other transfer spot while Reaume ended up falling to fourth behind Dusty Moore, who finished far behind Miller.

Polesitter Devin Shiels pulled away from an early battle with felllow front-row starter Mike Spatola for a heat race victory. Spatola, running down low like Shiels, got the second transfer spot by keeping Brian Ruhlman in check. Nick Bartels was fourth and Jason Riggs in fifth in the nine-car, caution-free prelim.

Presumptive series champ Brian Shirley won a lengthy side-by-side battle with fellow front-row starter Ryan Unzicker to win the second heat. Unzicker, who eventually dropped behind Shirley, settled for second to get the other transfer spot to the main event. Kevin Reeve finished third. A lap-two yellow flew when Craig Dippman's left-rear wheel fell off as he exited turn two, sending his car spinning on the backstretch.

Polesitter Jason Feger grabbed a 10-lap victory in the first prelim, cruising to nearly a straightaway victory after inheriting the lead on the second lap. Fifth-starting Jeep Van Wormer got second after a couple of contenders fell by the wayside, getting the only other transfer spot ahead of Zack Olger. Jason McBride, who got the initial jump from outside the front row, pulled to the infield on the second lap with a faulty battery. Reigning track champ Rusty Schlenk, who started third, was battling Van Wormer for the second spot when his left-front suspension collapsed in the No. 1z owned by Ron Zeller. He also dropped to the infield.

Jason Feger of Bloomington, Ill., the first qualifier on the track, topped a series-high 56 qualifiers Saturday at Oakshade Raceway for the 28th and final leg of the UMP DIRTcar Summernationals.

The top two finishers from each of six heat races transfer to the 22-car main event. Three consolation races send the winners to the B-main with the top six from the B-main transferring to the main event, which includes four provisional starters. The Birthday Race pays $10,000-to-win.

Although there’s been no announcement from UMP, Shirley is apparently the champion and is set to be crowned with the $25,000 championship following the month-long tour. Shirley has an insurmountable 61-point lead on three-time champion Shannon Babb of Moweaqua, Ill.

Series officials tried to defuse Friday’s controversy over Brian Shirley’s fourth-place finish at Attica Raceway Park, saying the finish stands and the ruling that kept him in fourth despite him drawing a late-race caution is “not up for discussion,” official Erik Grigsby said. ... Grigsby ran the drivers’ meeting after Sam Driggers skipped the night’s racing. He was back at the Wauseon Super 8, weary of the series controversies, Grigsby said. ... Grigsby refused to answer drivers’ questions about Shirley’s situation, referring drivers to Tom Deery, president and chief operation officer of UMP’s parent World Racing Group, who was scheduled to arrive about a half-hour after the meeting. ... Shannon Babb won last year’s series race at Oakshade. ... Other previous winners of the Summernationals finale in action are Shirley, Rusty Schlenk, Matt Miller and Jeep Van Wormer. ... Forty-one modifieds are also in action along with the hornets. ... Jerry Bowersock was surprised to see the water truck on the track so much, saying it seems like the track “added more water tonight than I’ve seen in the last 10 years put together,” he joked. ... Drivers entered with regular-season victories at Oakshade include Dona Marcoullier, Rusty Schlenk, Matt Miller and Jon Henry.