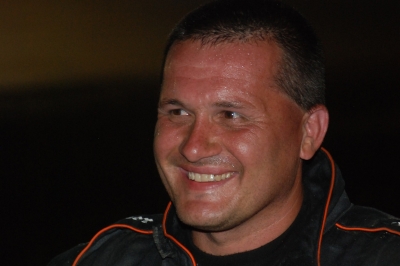 Eddie Carrier Jr. had a big smile in victory lane at Brushcreek. (DirtonDirt.com)

The 41-year-old from Salt Rock, W.Va., started outside the front row and led the final 37 laps at the third-mile oval for a $5,000 in Steven Partin’s Hidden Gem, a fund-raiser for a college scholarship fund. | Complete Summernationals coverage

Series points leader Brian Shirley of Chatham, Ill., extended his lead with a solid runner-up finish while Josh Richards of Shinnston, W.Va., was third after regaining the position from a late-charging Jason Montgomery of Jackson, Ohio, who started 17th and rallied to third on the final restart. Polesitter Chad Smith of Miamisburg, Ohio, who led the first three laps, ended up fifth.

Carrier was making just his second-ever series start, taking advantage of a rare series foray closer to his home region. He wasn’t a factor Tuesday at Florence Speedway in Union, Ky., but rebounded at Brushcreek.

“I thought, ‘Man, if anywhere, it could be (Florence),’ because I’ve been pretty good there, but it seems like I always struggle qualifying there,” Carrier said. "We made a few changes today for our qualifying effort to try to get qualified better, and it worked out. Just made some spring changes and stuff and it worked out for us.”

“We’re always pretty good at this track,” Carrier said. "I don’t know if it fits my driving style or we’ve just been here and got laps, but we always seem to run good here.”

After Carrier slipped under Smith in the early laps, he stretched his lead to a full straightaway by lap 15 and kept a cushion of lapped cars between him and his pursuers until the second and final yellow with six laps remaining in the 40-lapper.

“I didn’t want to see the caution, because I never had been hearing nobody, but I knew they might be catching me in lapped traffic,” Carrier said. "I got in a groove to where I was trying to run consistent laps, but I never got to where I was trying to slow down and save anything. I was just trying to run my laps every time ... when you’ve got these guys behind you, you can’t back off.”

“When I seen Shannon (Babb) and I seen (Dennis) Erb (Jr.), I said, ‘We must be pretty good,’ because you don’t lap those guys many times.”

With Carrier leading the way, Richards took second from Smith on lap 17 and vainly tried to keep up through traffic. A high-running Greg Johnson of Bedford, Ind., started 10th and was up to fifth when, while trying to get around Smith, made contact that damaged his car’s radiator and sent his overheating machine to the infield on lap 25.

For the next nine laps, the top five of Carrier, Richards, Shirley, Smith and Jason McBride were far ahead of the field, and Shirley squeezed past Richards on lap 28, six laps before the final caution.

On the restart, Montgomery quickly moved from sixth to third with a high-side run, but his charge never threatened Carrier, who edged away to take the checkers comfortably ahead of Shirley. Richards dove hard into turn one under Montgomery on the final lap drop him back to fourth at the finish.

The feature was slowed by two cautions, both for single-car incidents. Fourth-starting Zack Dohm broke a left-rear axle the first start, forcing a restart (Don O’Neal’s car was pushed off the track after the slowdown). The other yellow flew on lap 34 when ninth-running Mike Spatola stopped inside turn one.

Shirley solidified his points lead over Babb, who finished a lap down in 13th after going to a backup car for the feature. With three series races remaining, Shirley stretched his margin to 61 points. He led by 29 entering the Brushcreek event.

Notes: Carrier’s Carl Grover Motorsports-owned Rocket Chassis is sponsored by Engines Inc, VP Racing Fuels, Ohlins, Hess, Stewart and Campbell and Blue Ridge Machinery and Tools. ... While Carrier doesn’t have Summernationals experience, his father and crew chief Eddie Sr. crewed for Don O’Neal on the tour nearly 10 years earlier. ... Eleven of 22 starters finished on the lead lap and 16 were running at the finish. ... Hollywood stuntwoman Kathy Jarvis received a provisional starting spot to get just her second series feature start. ... The tour heads back west for the last time Thursday for a $5,000-to-win event at Terre Haute (Ind.) Action Track, which hosts its first series race since 2003.

Nearly missing the race while his team worked on a faltering carburetor, Jason Montgomery won the B-main to transfer to the main event along with runner-up and fellow Ohio driver Donnie Moran. Brandon Sheppard and Mike Spatola battled for third most of the race, and both ended up using provisionals to make the main event. Steve Casebolt, who finished second last night at Florence, missed the main in finishing fifth.

In the redraw among heat winners, Chad Smith of Miamisburg, Ohio, drew the pole position with Eddie Carrier Jr. alongside. Jason McBride and Zack Dohm are in row two. ... Smith led all but two laps of last week’s feature at Brushcreek. The mechanical engineer for Bilstein Shocks starts on the front row of what would be his biggest victory. He’s parked next to Dennis Erb Jr. and was chatting with him after the heats. “What you can glean from them is invaluable,” Smith said of the touring drivers. “These guys have so much knowledge.” ... Dustin Linville broke a right-front tie rod in a first-lap collision with Jason McBride while battling for the lead in a heat race. Linville thought he was for enough alongside McBride. “The ol’ car was really fast,” he said. “I think I had a good chance to win that heat race.” Instead, Linville will start on the tail of the consolation. ... McBride said he came down low because he was trying to give Donnie Moran room on the outside; he said he never saw Linville. ... McBride likened Brushcreek to Bubba Raceway Park in Ocala, Fla., with a sweeping turns one and two and tighter turns three and four. “This place is weird,” McBride said. “Luckily we had some laps down there.” McBride went to his second car tonight, a car he’s only driven once on the series at Jacksonville (Ill.) Raceway when he had engine problems in his primary machine. The second car is the one he raced primarily this winter in Arizona and Florida. ... Zack Dohm was glad his move to the high side worked out for a heat race victory. “I just figured I’d give it a shot,” said Dohm, who got some loaner tires from his dad Tim to get enough UMP-legal rubber for the race. However, he burned up a couple of the softest tires in the heat race. Tim isn’t competing because he’s had a busy week of work with one of his main salesman on vacation from Dohm Cycle, Zack said. ... Jason Montgomery’s team is trying to solve fuel pressure problems. ... Frank Heckenast Jr. went to a backup car because he broke a flywheel, crew chief Austin Hargrove said. ... Jon Henry missed time trials because of a broken water pump and complications that damaged his radiator; he borrowed a radiator from Mike Spatola’s team and transferred to the main with a fourth-place finish in his heat.

Third-starting Chad Smith, last week's winner at Brushcreek, outdueled Josh Richards in a side-by-side battle and went on to win the final 10-lap heat. The polesitter Richards settled for a close second while Scott James was a distant third. Jon Henry from the last row for the final transfer spot while Cody Mahoney, who started outside the front row, slipped back early and finished fifth. Nick Latham was part of three cautions. He spun between turns one and two to draw a first-lap caution, spun again inside turn two on the second lap and then again in turn three with Jerry Lierly on the restart.

Surviving a first-lap skirmish with Dustin Linville, polesitter Jason McBride cruised to his fourth heat race victory on the series to advance to the redraw for the main event. Fourth-starting Austin Dillon, taking a break from his NASCAR racing, got the second spot while Don O'Neal was third in the Moring Motorsports machine. Rod Conley got the final transfer spot. Third-starting Dustin Linville tried to get under McBride in turn three on the first lap, and contact between the two disabled Linville's machine and brought out a caution for a complete restart. Linville's No. D8 was towed off the track.

Running low early in the race, polesitter Zack Dohm jumped to the high side and overtook outside front-row starter Ryan Unzicker on the sixth lap to take command. He pulled away for the victory while Unzicker also moved up, nearly losing the second spot to a charging Greg Johnson. Johnson settled for third while Jason Feger got the fourth and final transfer spot. Frank Heckenast Jr., who had to start on the tail after going to a backup car following time trials, was sixth.

Winning a side-by-side duel among front-row starters, polesitter Eddie Carrier Jr. edged Shannon Babb for the victory. Babb led half the race from the outside, but Carrier worked his way past on the fifth lap and edged away. Babb slipped up in turn three on the eighth lap, allowing points leader Brian Shirley to slip underneath and grab the second spot. Babb and Dennis Erb Jr. got the other two transfer spots in the caution-free prelim.

Carrier posted a lap of 14.316 seconds at the 3/8-mile oval and will start on the pole of one of four heat races for the 25th leg of the month-long series

Other heat race polesitters: Zack Dohm of Cross Lanes, W.Va.; Jason McBride of Carbondale, Ill.; and Josh Richards of Shinnston, W.Va. The top four finishers from each of four heats transfer to the main event followed by a consolation race and 40-lap main event with a 22-car starting field.

Brian Shirley of Chatham, Ill., leads the $25,000 title chase heading into the homestretch with a 29-point lead over Shannon Babb of Moweaqua, Ill., Tuesday’s series winner at Florence Speedway in Union, Ky. ... Steven Partin’s Hidden Gem is a fund-raiser for a local scholarship fund for area youngsters heading to college. ... Former series champion Mark Morrison of Manchester, Ohio, initially entered the event but withdrew when he realized he didn’t have tires that fit the UMP tire rule. ... Frank Heckenast Jr. will start on the tail of his heat after going to a backup car following time trials. ... Among new series drivers for the night: Mark Frazier of Chillicothe, Ohio; Billy Gullion of Waverly, Ohio; and Nick Latham of Winchester, Ohio.