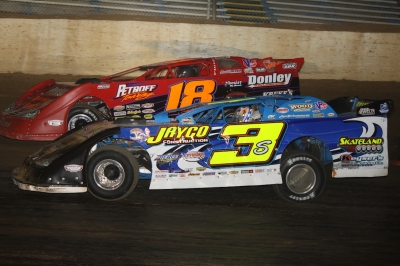 Shannon Babb (18) gets the jump on Brian Shirley (3s) at the outset of the 40-lapper. (stlracingphotos.com)

UNION, Ky. (July 10) — If Shannon Babb circled the tracks on the UMP DIRTcar Summernationals schedule where he expected to struggle, he might’ve put a couple of circles around Florence Speedway.

But instead of struggling at the half-mile northern Kentucky oval where he’s found precious little success, the 38-year-old driver ran circles around the track faster than anyone else in leading all 40 laps of the month-long tour’s 24th leg. Babb earned $5,000 and cut Brian Shirley’s points lead to 29 points with four series races remaining. | Complete Summernationals coverage

“I may never ever make it back to victory lane here, so I had to enjoy it,” a smiling Babb said. “We’ve been coming here for a long time, and we’ve spent a lot of money here, but we’ve just never collected much. I was just tickled to death for tonight.”

Steve Casebolt of Richmond, Ind., whose slide-job pass of the polesitting Shirley in the early laps gave him the second spot, reeled in Babb with 10 laps remaining couldn’t make a serious bid for the lead as the final 36 laps of the 40-lapper ran caution-free at the half-mile oval hosting its first series event in nine years.

Shirley, of Chatham, Ill., was just behind in third followed by fast qualifier Austin Dillon of Welcome, N.C., and Greg Johnson of Bedford, Ind. The 40-lapper was slowed by a single caution when Jeff Babcock spun in turn two running near the back of the pack.

Half of Babb’s Late Model career has been run with swing-arm suspensions that typically don’t perform well on Florence’s slick surface, but no matter what kind of car he’s driven, he’s mostly struggled on the track’s notorious “black ice.”

Babb's best career finish of fifth came in the 2003 North-South 100, but it’s a rare bright spot at a track where the only checkered flag before tonight came in a consolation race. In the only other Summernationals event at Florence in 2003, Babb didn’t even make the feature starting field.

“I’ve raced for about 25 years, and I suck over here really bad,” he said in victory lane. "I’ve raced over here a lot, and I don’t think I’d ever won a heat race. Everything went good tonight for us. We got on the front row, and that means a lot, and I just got the jump on (Shirley) and just kept rolling there. The Victory Circle car is probably by far the best car I’ve ever brought here before. Tonight was awesome. I actually enjoyed it, so we will be back.”

The high-running Babb led by a dozen lengths or so through the first 25 laps, but Casebolt drew closer by lap 30 as the faster groove moved down lower on the track. But Babb never let Casebolt get close enough to make a serious bid for the lead.

“Steve’s real good here ... there’s a lot of guys that have got a laps here, that I’m impressed when I watch ‘em,” Babb said. "I was smiling so big, I was trying to look and make sure I was keeping those guys behind me. It was a struggled to get down the straightaways a little bit, but once the rubber came, it was all right.”

Casebolt discovered the developing rubber strip in the center of the track before Babb, but not quickly enough to make a difference in the outcome.

“I knew my only hope was that he didn’t find the rubber,” Casebolt said. “He’s a good racer. He’s going to find the fastest groove normally every night.”

Babb probably won’t list Florence on his list of favorite tracks just yet, but it sounded like he’d return to Florence in a month for the Sunoco Race Fuels North-South 100, a $50,000-to-win Lucas Oil Late Model Dirt Series race he’s skipped the past few seasons.

“That would be nice if that thing had another zero on it,” Babb said of the winner’s check Tuesday, "but I’ll take that thing right there, too.”

Notes: Babb’s Victory Circle Chassis has a Pro Power Engine and sponsorship from Petroff Towing, Kreke’s Powerhouse and Donley Trucking. ... He thanked crew members Derek Brown and Gary Fore in victory lane; crew chief Chris Burton was absent because Babb sent him home after Sunday's altercation in the pits with Brian Shirley crew member Aaron Faugust at Tri-State Speedway in Haubstadt, Ind. ... Twenty of 22 starters completed 50 laps with only Jesse Lay (lap 19) and Jeff Babcock (lap 23) retiring to the infield. ... Shirley unofficially has a 1,587-1558 lead on Babb with four races remaining, keeping Babb within striking distance. According to the points structure, if Babb wins the next race and Shirley finishes worse than seventh, Babb could take the points lead. ... However, Shirley has finished worse than third just once in his last nine series starts. ... The series continues Wednesday with its first-ever appearance at Brushcreek Motorsports Complex in Peebles, Ohio, just 80 miles east of Florence.

Polesitter Eddie Carrier Jr. cruised to a victory in the B-main to transfer to the main event along with runner-up Chad Smith, who started outside the front row. Scott James finished a distant third just ahead of Jason McBride while Don O'Neal, who hasn't run well in part-time series starts in the Moring Motorsports ride, was further back in fifth of the caution-free 12-lapper.

Rod Conley overtook early leader Frank Heckenast Jr. and went on to win the C-main. Heckenast fell behind James Rice in the final laps as all three advanced to the B-main.

Polesitter Brian Shirley edged away from Ryan Unzicker’s early challenge and grabbed his 19th heat race victory of the tour. Unzicker was all alone in second with Dennis Erb Jr. likewise in the third spot. More than a quarter-track behind the leaders was the battle for the final transfer spot. Joe Janowski got that spot after surviving near-disaster on the frontstretch amid a cluster of cars exiting turn four early in the race. Duane Chamberlain slowed with a flat tire on the second lap and pulled to the infield.

Outside front-row start Shannon Babb, finding success at a track where he hasn’t had much, fended off several challenges from fourth-starting Justin Rattliff to win the third heat. Ratfliff nearly got to the outside Babb a few times but ran out of racing room before settling for second. Fellow Kentuckian Brad Neat just behind him in third and polesitter Mike Marlar got the fourth and final transfer spot. A yellow flew on the first lap when Scott James spun in turn two after bumping with Rod Conley; there was a complete restart.

Outside front-row starter Steve Casebolt got the jump and led all the way, cruising to victory in the first prelim. The Rocket Chassis house cars of Brandon Sheppard and Josh Richards chased him nearly a half-straight behind to transfer to the main event along with fourth-finishing Jason Feger, who fended off Eddie Carrier Jr.

Making a rare start in his Dirt Late Model, NASCAR Nationwide Series driver Austin Dillon of Welcome, N.C., topped 44 qualifiers Tuesday at Florence Speedway for the 24th round of the UMP DIRTcar Summernationals.

Dillon’s lap of 16.750 seconds on the undersized half-mile oval gave him the pole position for one of four heat races. Other heat race polesitters by topping their respective qualifying groups: Brandon Sheppard of New Berlin, Ill.; Mike Marlar of Winfield, Tenn.; and series points leader Brian Shirley of Chatham, Ill.

The top four finishers from each heat race will transfer to the main event, followed by a C-Main and B-Main, which sends two drivers to the feature. Four provisional starters round out the 22-car field for the first series event at the northern Kentucky oval in nine years.

Austin Dillon is making his first appearance at Florence since the 2006 North-South 100. ... Brian Shirley of Chatham, Ill., with a series-leading five victories, leads the series with 1,517 points over reigning series champ Shannon Babb (1,478) in what’s becoming a two-driver chase for the $25,000 title with five events remaining. Shirley and Babb will face plenty of fresh teams at Florence, a track on the fringes of UMP’s region that has drawn non-series standouts like Eddie Carrier Jr. of Salt Rock, W.Va., Mike Marlar of Winfield, Tenn., Brad Neat of Dunnville, Ky., Donnie Moran of Dresden, Ohio, and Austin Dillon of Welcome, N.C. .... Also competing in Tuesday’s action is former Rocket Chassis house car driver Josh Richards, who left the team in the spring to purse a career on the NASCAR Nationwide Series. Richards will drive as a teammate to Brandon Sheppard, the current Mark Richards Racing driver who stands fourth in series points. ... Richards is driving the car he won with during Florida Speedweeks at Bubba Raceway Park in Ocala, Fla. .... Shannon Babb is without crew chief Chris Burton after Burton was involved in a scrap with Brian Shirley crew member Aaron Faugust in the closing laps of Sunday's feature at Tri-State. "He apologized and said his temper got the best of him," Babb said. ... Matt Miller of Whitehouse, Ohio, won the only other Summernationals race at Florence in 2003. ... Robby Hensley of Walton, Ky., leads Florence’s weekly points over Josh Williams of West Harrison, Ind. ... Dustin Linville and Mike Spatola both missed their time trial session after getting into the wall in separate hot-lap incidents. ... The series is in the home stretch with four races following Florence, culminating with the $10,000-to-win finale at Oakshade Raceway in Conneaut, Ohio. 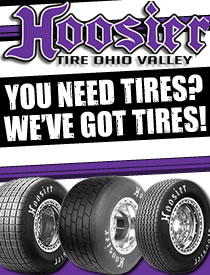