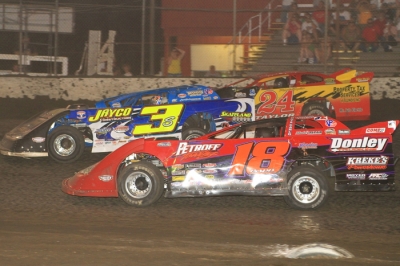 The fourth-starting Shirley used the high side to move to second early in the 100-lap race, which served as the 19th leg of the month-long Summernationals tour, and later overtook outside polesitter Kyle Logue of Cisco, Ill., for the lead on lap 16.

Shirley cruised through the race’s middle portions until the seventh-starting Babb closed in around lap 60. Unable to find a way around the high-running Shirley, Babb settled into second until the race’s final caution on lap 96 set up a four-lap run to the checkers.

Babb applied heavy pressure following the restart, but couldn’t make a bottom-side run strong enough to complete the pass. He made his strongest challenge on the final lap, diving under Shirley entering turn three and pulling even in turn four.

But just as he had all race, Shirley stayed smooth on the top side of the racetrack and raced back ahead down the front straightaway, crossing the finish line .439 seconds ahead of Babb to earn a special victory at a track where he cut his teeth as an up-and-coming racer.

“When I first started racing and saw Shannon Babb and Billy Moyer and Don O’Neal (win the Herald & Review 100), it was something that was on my bucket list for sure,” said Shirley, a former Late Model track champion at Macon. “I’m just thankful to go home and put that trophy on the mantle and put that check on the wall.”

Behind Babb, Ryan Unzicker of El Paso, Ill., finished a distant third while Brandon Sheppard of New Berlin, Ill., recovered from a mid-race pit stop to finishing fourth with his father Steve Sheppard Jr. rounding out the top five.

The victory was a large measure of redemption for Shirley after he wrecked while running second in the tour’s race the night before at La Salle (Ill.) Speedway. Shirley and his crew worked into the daylight hours Thursday morning to repair the damaged race car, and it paid off Thursday night.

“The last words out of my mouth before going to bed at 7 this morning, I told my guys I’m going to do everything in my power to win this race,” said Shirley, who became the first driver to win four races on this year's Summernationals tour. “I wanted to get another car out but my guys said nope, we’re going to get this thing back together. I’m so proud of them, and just so proud of my team right now.”

Babb, the defending race winner and reigning Summernationals champion, was waiting for a mistake from Shirley that never came.

“I think the only way I was going to get by him was if he bobbled or pushed into the cushion. But he kept his composure and kept rolling,” said Babb, a three-time Herald & Review 100 winner. “We ended up real close to him, but he got the job done.”

The fifth-starting Unzicker was one of the fastest cars early in the race. He quickly advanced to second and challenged Shirley on two restarts before halfway. But he let Babb slip by following a lap-57 restart and couldn’t keep up with the leaders late in the race.

“At first the car was awesome on the bottom and couldn’t have got any better. Then that caution came out and the left-rear just quit digging,” Unzicker said. “We hung on to third, but definitely the first 25 or 35 laps of that deal, I thought we could’ve won it.”

Kevin Weaver of Gibson City, Ill., took the lead from second-starting Logue on lap eight and pulled away as the leaders raced through heavy traffic. But contact with the lapped car of Tony Toste on lap 14 caused front-end damage to Weaver's car and he spun in turn three on the next lap.

Polesitter Jon Henry of Ada, Ohio, ran among the top five for the first half of the race, but faded late and ended ninth after going a lap down just before the final caution.

Notes: Shirley’s Pierce Race Car has a a Pro Power Engine and is sponsored by Jayco Construction, Skateland South, Allstar Performance, Kim’s Auto Body, and JFR Graphics. … The victory is Shirley’s 11th overall on the Summernationals tour, moving him to 11th on the tour’s all-time wins list. … The race was slowed by five cautions, including a tangle between Chuck Mitchell and Matt Taylor on the opening lap that necessitated a complete restart. … Fourteen cars were running at the finish, with eight on the lead lap. … The Summernationals tour moves to Quincy (Ill.) Speedway for a $7,500-to-win event.

Looking for his second Summernationals victory, Jon Henry will start from the pole of the 100-lap main event after a redraw among heat race winners. Kyle Logue will join Henry on the front row while Kevin Weaver and Brian Shirley will share row two. ... Mike Spatola and Jason McBride will use a series provisionals to start the main event while Mike Hammerle will use the UMP national points provisional and Greg Kimmons will use the track provisional.

Matt Taylor moved from third to first on the opening lap of the 12-lap last chance race and held off fourth-starting Brandon Sheppard for the entire distance. Sheppard followed just behind Taylor in the top groove for the first half of the race before dropping to the bottom and pulling alongside for the lead just pass halfway. The drivers ran even through the closing laps with Sheppard edging ahead down the back straightaway on the final lap. But Sheppard's line was blocked by a slower lapped car in turns three and four and Taylor drove around Sheppard off the final corner. Sheppard settled for second and joins Taylor in transferring to the main event. Jason McBride got the jump on the start of the caution-free race, but dropped back to fourth after nearly spinning in turn three on the opening lap.

Kyle Logue in the first half of the 10-lap race, but had to hold off a late charge by Wes Steidinger to claim the prelim victory. Steidinger rallied from a mid-pack starting spot and looked under Steidinger in the closing laps. He pulled alongside Logue exiting turn four coming to the checkers but fell just short in settling for second. Joseph Hughes was third while Jason Feger recovered from a qualifying penalty by coming from the tail to top Brandon Sheppard for the fourth and final transfer spot. Sheppard and Jason Papich tangled to bring out a lap-five caution. Papich, who survived the tangle to retain the fourth position, was put to the tail of the field for jumping the ensuing restart. Feger's qualifying time was fast enough to earn him the pole of the fourth heat, but his time was disqualified because he showed up late to staging for his qualifying laps.

Leading every lap on the high side, polesitter Jon Henry held off Shannon Babb's late charge and won in a side-by-side finish. Third starting Babb moved to second on the start and pressured Henry through the race's early laps. Henry pulled away following a lap-three restart, but a lap-seven caution gave Babb a chance to challenge late. Babb looked under Henry on each of the final laps, but came up just short at the flag stand. Chris Dick finished third while Chuck Mitchell held off Matt Taylor and Mike Hammerle for the fourth and final transfer position. The race's first caution waved with three laps complete when Kenny Vandorn spun in turn three, Jake Little spun in turn four on lap seven to bring out the second caution.

Outside polesitter Kevin Weaver topped a three-wide battle with Dennis Erb Jr. and Steve Sheppard Jr. on the opening lap and pulled away for a flag-to-flag victory in the caution-free race. The polesitting Erb pulled away from a race-long battle with third-starting Sheppard with just a couple laps remaining in the 10-lapper and looked under Weaver coming to the white flag. But he couldn't find a way around Weaver on the final lap and settled for second. Sheppard was just behind the leaders in third while Tony Toste topped Jason McBride in a photo finish for the fourth and final transfer spot.

Leading every lap from the pole, fast qualifier Brian Shirley won the first 10-lap heat race by nearly a straightaway on the tight fifth-mile oval. Ryan Unzicker finished second, never seriously challenging for the lead, while Richie Hendrick held off race-long pressure from Nick Bartels for third. Bartels settled for fourth at the finish, grabbing the race's final feature transfer. The race was slowed with four laps complete when Jerry Lierly slowed on the back straightaway with heavy right-side damage.

Shirley, who's still look for his first Herald & Review 100 victory, posted a lap of 10.942 seconds to earn the pole for one of four heat races coming up. Other heat race polesitters after qualifying: Dennis Erb Jr. of Carpentersville, Ill.; Jon Henry of Ada, Ohio; and Jason Feger of Bloomington, Ill.

Each 10-lap heat race will transfer the top four finishers to tonight’s 100-lap main event while two B-main transfers and four provisional starters will make up the remainder of the 22-car field.

Brian Shirley of Chatham, Ill., took a hit in the points standings with his 21st-place finish Wednesday at La Salle (Ill.) Speedway, but he remains atop the series standings with a 24 point lead over reigning champion Shannon Babb of Moweaqua, Ill. Jason Feger (-100) of Bloomington, Ill., is third followed by Brandon Sheppard (-167) of New Berlin, Ill., and Ryan Unzicker (-276) of El Paso, Ill. ... Following his rough night at La Salle, Shirley and crew members Aaron Fugust and Matt Suzuki worked until past daylight this morning to repair damage Shirley’s Pierce Race Car suffered in two wrecks in Wednesday’s main event. Shirley said over driving his car was likely what caused his violent wreck into La Salle’s turn-three water barriers. “I was just running too hard and let it get away from me,” said Shirley, who was running second to eventual winner Brian Birkhofer before contact with the back straightaway wall cuased him to lose control of his car. “Nobody can say I’m points racing cause that’s proof right there that I’m out here trying as hard as I can to win races.” … Rusty Griffaw of Mount Olive, Ill., is making his first appearance on this year’s tour in tonight’s event. Griffaw, a former UMP Late Model Missouri and Tennessee state champion, has competed in the UMP Modified division for most of the season while waiting on his Late Model engine to be rebuilt. Tonight is his first race in the Rocket Chassis since three starts early in the year. … It’s easy to pick out the drivers who plan to run the high side in tonight’s event. With the top groove often requiring contact between the wall and a car’s right-rear corner, a number of teams have shortened their right-side quarter-panels to save the trouble of having to make repairs throughout the night. Brandon Sheppard and Scott James’ cars were among the cars with the most noticeable shortenings. … Dennis Erb Jr. of Carpentersville, Ill., and Jerry Lierly of Camp Point, Ill., both missed hot laps after arriving late to the track.