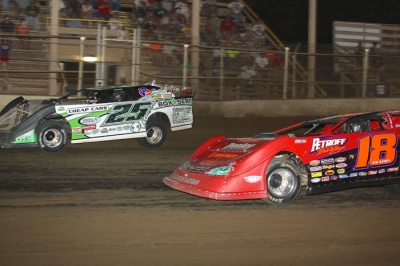 BELLEVILLE, Ill. (June 27) — Jason Feger of Bloomington, Ill., led the final 22 laps of Wednesday night's 40-lap feature at Belle-Clair Speedway, earning $5,000 for capturing the 13th leg of the UMP DIRTcar Summernationals. Feger, the 2010 series champion, scored his second victory in as many nights on the 29-race tour that visits 28 tracks in 32 days. | Complete Summernationals coverage

The polesitter Feger took the lead after points leader Brian Shirley of Chatham, Ill., suffered a flat right-front tire on a lap-18 restart and later topped Shannon Babb of Moweaqua, Ill., and Brandon Sheppard of New Berlin, Ill., in a green-white-checkers finish at the tight, fifth-mile oval.

Feger trailed Shirley for the race’s first 18 laps, but he was in the right spot when Shirley’s flat tire sent him into the wall on the front straightaway, initiating a multi-car pileup that collected several front-runners.

“Brian got the jump on me and he was looking pretty strong. He had some misfortunes there, but we were there to capitalize,” said Feger, who scored his first victory on this year’s tour Tuesday night at Lincoln Park Speedway in Putnamville, Ind. “I had a really good restart, and I knew when he didn’t take off really good that something was messed up. Luckily, I chose the bottom and made it through there or it could’ve been bad for us as well.”

After witnessing Shirley’s demise on the first restart and with Babb and Sheppard lurking behind him, Feger did not welcome the final yellow flag.

“I definitely didn’t want to see that last caution,” Feger said. “On these short tracks like this anything can happen. … I just kept it straight and as smooth as I could and luckily it worked out for me.”

Sitting third on the final restart, Babb quickly overtook Sheppard when the race went back green before looking under Feger on the final lap. But he came up just short in settling for the runner-up finish.

Sheppard was third for the second straight night followed by sixth-starting Billy Moyer Jr. of Batesville, Ark., and Rodney Melvin of Benton, Ill., who rallied from the 14th starting spot to finish fifth.

“It was a good points night for us. I hate to get it like that because (Shirley) was probably going to win the race,” Babb said. “But there’s a lot of racing left. You’ve gotta stay out of the fence. … When you’re racing like this for points, you’ve gotta keep your car clean.”

Shirley of Chatham, Ill., entered the race riding the momentum of five consecutive finishes of second or better and appeared to be headed for another strong finish when he jumped out front and opened a comfortable lead during the race’s early going.

Contact with a lapped car just before the lap-18 caution was the apparent cause of Shirley’s untimely flat, but he was unaware the tire had deflated before the race went back green.

The pileup left third-starting Kevin Weaver's race car on its side, crammed between the cars of Shirley, Sheppard, Ryan Unzicker and Mark Voigt.

Sheppard and Unzicker were able to continue running even with significant cosmetic damage and were allowed to retain their top-five positions. With two flat tires and heavy sheet metal damage of his own, Shirley pitted under the caution before recovering to finish 11th.

“I just didn’t know it and didn’t feel anything out of the ordinary,” Shirley said of his downed right-front tire. “When we took off going into turn one, it just turned right and had we had no where to go but stuff it in the wall.”

Even with the disappointing result, Shirley was encouraged by how strong his car ran early in the race.

“We were leading when it happened, so I’m not discouraged one bit,” Shirley said. “We’re gonna have bad luck; that’s what makes it interesting. My guys are (making repairs). We’ll get everything good to go and knock down a win tomorrow night.”

Notes: Feger's Pierce Race Car is powered by a Rhyne Competition Engine and sponsored by Chizmark Larson Insurance, Pro Tire & Automotive, Jaxon Chase Steel Detailing, Box Seat Motorsports, Mulligans and Stearn Ironworks. … Unzicker of El Paso, Ill., continued to run in the top five until slowing on the back straightaway to bring out the final caution. … The first caution appeared when Brent Kreke of Lebanon, Ill., slowed on the back straightaway. Jim Moon of Zionsville, Ind., slowed a few laps later to bring out the second caution. … The Summernationals makes its first of two visits to Tennessee Thursday, visiting Clayhill Motorsports Park in Atwood for a $5,000-to-win event.

Looking for his second victory in as many nights, 2010 series champion Jason Feger will start from the pole of tonight's 40-lap main event. Points leader Brian Shirley will join Feger on the front row while Kevin Weaver and Shannon Babb will share row two. ... Bobby Pierce and Jason McBride will use series provisionals to start the main event will Brent Kreke will use the track provisional and Mike Spatola will use the UMP national points provisional. Race officials originally posted Randy Korte as the national points provisional, but Korte reported that he would be unable to start the race due to damage from a heat-race wreck.

Second-starting Jon Henry outdueled fellow front-row starter Ed Dixon in an early side-by-side battle before pulling ahead to win the caution-free 12-lapper. Dixon remained close to Henry throughout the race, but settled for second, a car length behind the leader. Both drivers earn feature starting spots. Expecting there to be C-main prior to the B-main, Henry nearly missed the race. He made it on the track just in time to take the green.

Polesitter Jason Feger held cruised early in the 10-lapper, then held off a hard charging Ryan Unzicker following a late restart to score the victory. Just as the track appeared to be locking down in the bottom groove, Unzicker jumped up top following a lap-two restart and quickly rallied from fifth to second. He ran down the low-running Feger in the next couple laps before a caution with three laps remaining gave him a shot at the leader. Feger jumped up to the top on the restart, and Unzicker couldn't make the pass on the bottom. Behind Unzicker, Frankie Martin finished third while Dewaye Keifer beat Kevin Cole in a photo finish for the fourth and final transfer spot. Jason McBride spun in turn four to bring out the lap-two caution. Bobby Pierce spun in turn two to bring out the second caution.

Polesitter Shannon Babb grabbed the lead on the start and held off repeated challenges from Dennis Erb Jr., to lead the entire distance. Erb attemped to pass Babb on the high side, but the groove was much slower as the entire field ran around the bottom of the racetrack. Erb moved back to the bottom for the remaining distance, but couldn't find a way around Babb. Erb settled for second followed by Jim Moon and Mike Schulte in the other transfer positions.

Polesitter Brian Shirley led every lap of the 10-lapper while the second spot was swapped multiple times behind him. Mark Voigt held the spot early in the race, but Billy Moyer Jr. rallied on the bottom of the track to grab the spot late in the race. Jon Henry briefly held second early, but faded after half way. He moved and tried to hold on to the fourth and final transfer spot late in the race, but let tail-starting Rodney Melvin slip by for the transfer finish. Voigt survived a brush with the wall early in the race debris from his car caused the race's first caution, but he maintained the second position for the restart. The race was slowed again a lap later when Bobby Bittle tagged the wall and turned sideways on the front straightaway and collected Randy Korte. Both cars suffered heavy damage in the incident.

Outside polesitter Kevin Weaver outdueled fellow front-row starter Brandon Sheppard in the race's first two laps and survived a mid-race brush with the wall in leading every lap of the caution-free 10-lapper. Weaver pulled away after clearing Sheppard on lap three, but his pace slowed considerably after he tagged the wall and suffered right-rear sheet metal damage. But Weaver held on, forcing Sheppard to settle for second. Michael Kloos was third with Frank Heckenast Jr. claiming the fourth and final transfer spot.

Sheppard will start from the pole of one of four 10-lap heat races coming up at the St. Louis-area dirt track. Other heat race polesitters after group qualifying: points leader Brian Shirley of Chatham, Ill.,; Shannon Babb of Moweaqua, Ill.; and Jason Feger of Bloomington, Ill., who won Tuesday night’s series race at Lincoln Park Speedway.

Bobby Pierce of Oakwood, Ill., did not arrive to the track in time to take his qualifying laps. UMP officials reported that Pierce's race team should arrive at the track soon after being delayed by hauler issues earlier this afternoon.

Riding the momentum of five consecutive finishes of second or better, Brian Shirley of Chatham, Ill., leads the series standings with 810 points. Reigning series champion Shannon Babb of Moweaqua, Ill., is second with 769 points followed by Tuesday’s winner Jason Feger (670), Brandon Sheppard (620) and Ryan Unzicker (615). … Billy Moyer Jr. of Batesville, Ark., is rejoining the tour after heading home for a few days to recuperate. Moyer, who three of the tour’s first four races, struggled with engine woes and disappointing performances after his hot start on the series and dropped off after June 23’s race at Fairbury (Ill.) American Legion Speedway. He plans to follow the tour at least through Saturday’s race at Federated Raceway at I-55 in Pevely, Mo. Moyer typically runs well at Belle-Clair with finishes of second and fourth in the track’s past two Summernationals races. … Shannon Babb doesn’t exactly rank Belle-Clair among his favorite tracks. “It’s one of those places where you make laps, but you don’t really race,” Babb said prior to Wednesday’s action. “Sometimes you’ll see some good racing, but usually you just try to stay out of trouble and make it to the end.” … Jason McBride of Carbondale, Ill., said he wouldn’t mind if the track is one-grooved. “Seems like there’s less wrecking that way,” he said. “When you’re racing side by side on this place something always ends up happening.” … Ryan Unzicker won last year’s Summernationals race at Belle-Clair after apparent winner Michael Kloos Trenton, Ill., was disqualified for using chemically enhanced tires.