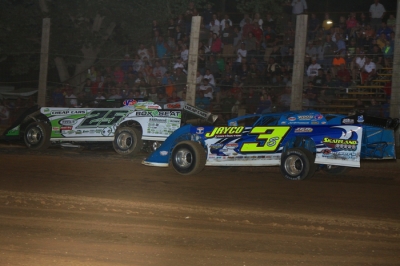 Starting from the outside pole, Feger pulled ahead of polesitter Shannon Babb of Moweaqua, Ill., on the start of the 40-lap race and held a comfortable advantage for most of the distance. But the sixth-starting Shirley of Chatham, Ill., closed late in the race when Feger got stuck behind the side-by-side lapped cars of Jason McBride and Mark Voigt.

With Shirley hot on his heels, Feger looked to split the two slower cars entering turn one on lap 39, but thought better of it when the gap closed in turn two.

The lost momentum put Shirley well within striking distance on the last lap. He dove under Feger as the leaders entered turn three for the final time, but Feger used a strong run off the top of turn four to pull back ahead and take the checkers with a car length advantage.

“Those guys were in front of me there and you had to be patient cause you didn’t exactly know which way they were gonna go,” said Feger, who posted his first Summernations victory since the fourth round of last year’s tour. “They were racing side by side for position, too. … I was just trying to be straight, smooth and trying to be patient, hoping it went my way. Luckily it did because a lot of times it doesn’t.”

Shirley settled for the runner-up finish ahead of Brandon Sheppard of New Berlin, Ill. Babb, the reigning series champion who’s second to Shirley in the current series standings, slid back to fourth at the finish with Ryan Unzicker of El Paso, Ill., rounding out the top five.

The victory not only gave Feger his first win on this year's tour, but was also a major momentum boost for the 34-year-old driver and his race team as they chase the grueling regional series that includes 29 races in 32 days.

“It’s important and good for the crew especially. We’ve been working really hard on this deal,” said Feger, who entered the event with four top-five finishes in tour’s first 11 races. “I feel like we’ve been making big gains. We’ve been real fast the whole tour in the features; just my heat races and qualifying have been down. The last week and this week we started picking that back up. You’ve got to win the heat races, that’s the bottom line.”

Shirley, who entered the event with a 31-point lead over Babb in the series standings, posted his fifth consecutive finish of second or better on the tour and extended his lead in the chase for the tour’s $25,000 championship.

“I’m definitely very proud of how we’re running. I just hope we can keep it up,” said Shirley, whose impressive five-race hot streak includes two victories. “I know we’re not gonna win every race, but it’s good as long as we can be there in the hunt.”

Sheppard, who notched his first top-five finish on this year’s tour, was closing in on Feger and Shirley in lapped traffic before the race’s final caution on lap 19. But he settled for third at the finish after the leaders pulled away while the second half of the race ran green.

“I feel like we could’ve had a little bit more,” said Sheppard, who started third and fell back as far as sixth before moving forward. “We were catching them before that last caution came out. If it would’ve kept going, maybe we could have got around them, who knows.”

Shirley had a close call early in the race while racing Babb for the second spot. After battling back and forth for a number of laps, two points leaders made contact on the back straightaway on lap 10, turning Shirley’s car nearly completely sideways going into turn three. But Babb was there to straighten him up and both cars continued running.

The race was slowed by three cautions, the most serious of which came on the second lap when a spin by Chad Stapleton of Edinburgh, Ind, spurred a five-car pileup in turn two.

Notes: Feger's Pierce Race Car is powered by a Rhyne Competition Engine and sponsored by Chizmark Larson Insurance, Pro Tire & Automotive, Jaxon Chase Steel Detailing, Box Seat Motorsports, Mulligans and Stearn Ironworks. … Feger was second on the first attempt to start the race, but officials ruled that Babb fired too early. … Along with Stapleton, the lap-two pileup included McBride, Greg Kendall, Jeremy Hines and Mike Spatola. … Jon Henry of Ada, Ohio, didn’t appear to be involved in the turn-two pileup, but he was pushed to the pit area under the lap-two caution. … The second caution waved on lap 11 when Kellen Conover stalled in turn four, and fast qualifier Frank Heckenast Jr. had a flat to bring out the lap-19 caution. … Tuesday’s race kicked off a stretch of 13 races in 13 nights for Summernationals competitors. The tour moves to Belle-Clair Speedway in Belleville, Ill., Wednesday for another $5,000-to-win event.

Looking to win Lincoln Park's Summernationals event for the second straight year, Shannon Babb will start from the pole of a 40-lap event after a redraw among the three heat race winners. Jason Feger will start second with Brandon Sheppard inside row two. ... Ryan Unzicker called his final-lap dive to the bottom in the second heat race a hail-marry move that came up just short. “I thought I had him there,” Unzicker said as he prepared to start from the fifth spot in the main event. Unzicker didn’t think he would be able to move up much on a track that was extremely top-side dominant in the heats. “It’ll be tough. We’ll need some things to go our way,” he said. … Brandon Sheppard wishes he had the second starting spot. “That’ll make all the difference; whoever's starting up top there will probably get the jump,” he said. “But who knows, I guess maybe it’ll blow off some.” Looking for his first tour victory this year, Sheppard, the new driver of the Rocket Chassis house car, hopes to win the first one soon because he thinks more will follow. “We’re still figuring things out. If we could get that first one out of the way, I think more will follow.” … Jason Feger’s crew made a last-minute gear change. He’s starting second.

Second-starting Jason Feger pulled ahead on the start and held off polesitter Brian Shirley in a race-long battle for the lead. Shirley made his strongest challenge with a low-side run in the final corner, but came up short as the high-running Feger pulled ahead by a car length at the finish line. Jon Henry was a distant third followed by Kevin Weaver and Bobby Pierce in a race where all starters transferred to the feature.

Shannon Babb survived an opening-lap bobble and a late charge from Ryan Unzicker to win the 10-lap prelim in a photo finish. The second-starting Babb got the jump on Unzicker, but jumped the cushion in turn one on the first lap. Unzicker and Nick Bartels briefly made it three wide, but Babb pulled back ahead down the back straightaway. Babb pulled away during the first half of the race, but a caution gave Unzicker another run at the leader. Unzicker pressured Babb the remaining distance after the restart, using a low-side run to pull even off the final corner. But Babb's high-side momentum gave him the run he needed to cross the finish line ahead by a nose. Bartels was third followed by Mike Spatola and Mark Voight. All seven cars transferred to the A-main.

Holding off polesitter Frank Heckenast Jr. for the entire distance, second-starting Brandon Sheppard led all 10 laps to win caution-free prelim. Heckenast gave chase, but never found a way around on a track that was high-groove dominant. Dennis Erb Jr. finished third, quite a ways behind the two leaders, with Chad Stapleton and Jeremy Hines taking fourth and fifth even farther back. All seven starters transferred to the main event.

Frank Heckenast Jr. of Frankfort, Ill., was the only driver to break the 12-second bracket during Tuesday’s time trials at Lincoln Park Speedway, topping 21 qualifiers for the $5,000-to-win UMP DIRTcar Summernationals event .

Heckenast’s lap of 12.931 seconds earns him the pole for one of three 10-lap heat races coming up at the 5/16-mile oval that rarely hosts Late Model events. Ryan Unzicker of El Paso, Ill., and points leader Brian Shirley of Chatham, Ill., will lead the other two heats to green.

With just 21 cars entered in the event, no consolation races will be ran and there will be no need for provisional starters.

Dennis Erb Jr. of Carpentersville, Ill., and Jeremy Hines of Seymour, Ind., both had trouble in turn four on their first qualifying laps and drove backward on the track to get a better head of steam before crossing the line to begin their second laps. Chad Stapleton of Edinburgh, Ind., did the same thing, only his turnaround came on his warm-up lap.

Late Models rolled out for a second round of hot laps at 7:45 p.m. due to the track being extremly wet during the first round. ... The program was scheduled to get under way with hot laps at 6 p.m., but was delayed by nearly an hour due to a highway accident on I-70 that left a number of teams stuck in traffic. … Brian Shirley of Chatham, Ill., leads the series standings with 740 points ahead of reigning champion Shannon Babb of Moweaqua, Ill., at 709 points. Jason Feger (595) is third followed by Ryan Unzicker (560) and Brandon Sheppard (555). … With less than 24 cars, there will be no consolation races tonight, meaning all drivers will make the main event lineup. … Kathy Jarvis, the Hollywood stunt woman turned Late Model rookie, is taking a few days break from the tour after experiencing engine woes during Sunday’s race at I-96 Speedway in Lake Odessa, Mich. Jarvis, who was still looking for her first feature start, plans to rejoin the tour later in the week. … Jeremy Hines of Seymour, Ind., is rejoining the tour for the first time since the series opener at Brownstown (Ind.) Speedway. Hines, a Late Model rookie, was impressive at Brownstown, winning a heat race before getting caught in a tangle during the main event. ... Making his second visit to Lincoln Park, Kevin Weaver of Gibson City, Ill., is racing without any crew help tonight for the first time in his career. “It’ll be busy, but I’m sure I can handle it,” Weaver said as he prepared his car for action Tuesday evening. … With the tour taking its second off day on Monday, Jon Henry had the chance to stop by his home in Ada, Ohio, for the first time since leaving for the tour’s first race on June 13. “It was tempting to stay, but I’m sticking with as long as I can,” Henry said, adding that Monday's stop will be his last trip home until he either drops off the tour or makes it through the finale on July 14.