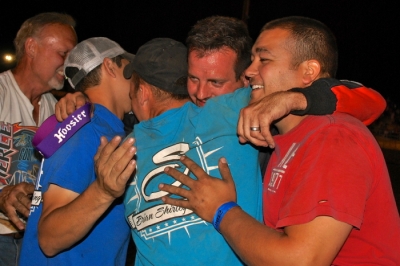 Starting from the outside of the front row, Shirley outdueled polesitter Shannon Babb on the race’s opening lap and never looked back.

The 31-year-old driver committed to running the topside of the track from the outset and survived a tricky cushion and a mid-race brush with the wall to score his second series victory in three nights.

“It was definitely one of them things where you’d bobble a little bit and need to back off,” said Shirley, who avoided serious damage when he tagged the wall exiting turn two on lap 24. “There was a couple times in there that I told myself I needed to just calm down, get back smooth again and hit my laps. I knew if I could just him my laps we had a pretty good race car.”

Reigning track champion Eric Smith of Bloomington, Ill., came out on top of a fierce battling for the second spot, topping hometown driver Scott Bull, who finished third after starting 11th. Babb of Moweaqua, Ill., also battled for the second spot throughout the race, but fell back to fifth before recovering to finish ahead of Ryan Unzicker of El Paso, Ill., in a photo finish for the fourth position.

Smith used the low groove to quickly move forward from his fifth starting spot and briefly pressured Shirley around the 10-lap mark of the 50-lap race.

Shirley denied each of Smith’s challenges and pulled to nearly a straightaway lead when the race ran green for the remaining distance following the only caution with 18 laps complete.

“I seen Eric and I knew I needed to turn it up to get in front of him so he couldn’t keep coming in on me in the bottom,” Shirley said. “Once I got out there and not seeing him every lap, I just tried to lay down some good laps. And then with five to go, I just put the hammer down.”

Smith, who scored a career-high $10,000 victory in last September’s Prairie Dirt Classic at Fairbury, settled for the runner- up finish, never abandoning the bottom groove even as Shirley pulled away on the top.

“We pretty much setup for the bottom with soft tires on the left side,” Smith said. “I drove as hard as I could, we just come up short.”

Bull also used the low groove to move up in the race and was one of the fastest cars on the track during the later stages. He chased down Smith around the 10-to-go mark, but with Smith running smooth on the bottom, Bull couldn’t find a way around.

“I think we could have run (with Shirley for the lead), but Eric was still pretty tough on the bottom. It would’ve been tough to get around him,” said Bull, who currently leads the standings in Fairbury’s weekly UMP Late Model division. “It would’ve been real nice to win one of these, especially at Fairbury. But to run third, I’m happy with it.”

Shirley, who won the tour’s race Thursday at Fayette County Speedway in Brownstown, Ill., and was second Friday at Tri-City Speedway in Pontoon Beach, Ill., began the series only planning to run select events. Sunday’s race at I-96 Speedway in Lake Odessa, Mich., originally wasn’t among his planned races. But after emerging as a favorite to claim the tour’s $25,000 championship, he plans to remain on the tour, at least for now.

“I went home last night (after Tri-City) and it was so tough,” Shirley said. “It’s a different mindset for me. We’re trying to stay in the game, but I’m trying not to let the emotions get to me cause I miss my family. But as long as we keep doing good, it makes it worth it to keep on the road.

Notes: Shirley’s Pierce Race Car is powred by a Pro Power Engine and is sponsored by Jayco Construction, Skateland South, Allstar Performance, Kim’s Auto Body, and JFR Graphics. … Fast qualifier Frank Heckenast Jr. of Frankfort, Ill., brought out the lap-18 caution when he slowed from the fifth position with a flat right-front tire. … Shirley has won in three of his past four visits to Fairbury, including a $5,000 victory in last year’s Prairie Dirt Shootout. … Billy Drake advanced from 17th to ninth for his third top-five finish in three Summernationals starts this year. … Shirley becomes just the second driver to win multiple events on this year’s tour, joining Billy Moyer Jr., who won three of the tour’s first four events. … Sunday’s race at I-96 pays $5,000 to the winner.

Officials have decided to take a brief intermission for track prep after the modified feature ran caution free with most cars running around the bottom of the racetrack. The Super Late Model feature follows the intermission. ... Shannon Babb will start from the pole of tonight's 50-lap main event after a redraw among heat winners. Brian Shirley starts second with Jason Feger and Frank Heckenast Jr. sharing row two. A miscommunication between series and track officials led to the lineup earlier being posted with the incorrect redraw. ... Billy Moyer Jr. and Jason McBride will use series provisionals to start the feature while Daren Friendman will use the track provisional and Jon Henry will use the UMP national points provisional.

Billy Drake moved by polesitter Jon Henry on the second lap and led the remaining distance for the win and a feature starting spot. Rodney Melvin overtook Billy Moyer Jr. midway through the race to earn the race's other transfer spot. Both Henry and Moyer jumped to the high side after losing their positions and faded badly in a race where most of the field ran the bottom groove.