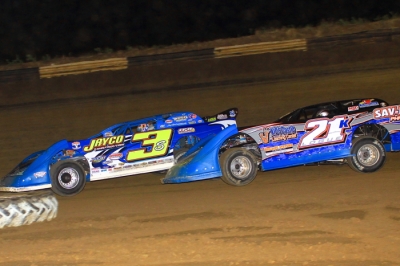 But for the final nine laps of the 40-lap race, Shirley was put to task holding off a hard-charging Kyle Logue hungry for a breakthrough victory on the month-long tour. | Complete Summernationals coverage

Shirley was up to the challenge. The 32-year-old racer turned back each of Logue’s charges during the final run to the finish and earned $5,000 for his first victory on this year’s Summernationals tour.

Grabbing the lead on the start, the polesitting Shirley ran the top groove around the quarter-mile oval while pulling to more than a straightaway lead during a 24-lap green-flag run to start race.

Shirley’s lead didn’t grow nearly as large following the restart, and after the second and final caution with 31 laps complete, his lead was never more than a couple car lengths.

Shirley was fighting off heavy pressure from Logue with less than five laps remaining when he switched the line he ran around the track, giving him the edge he needed to hold on for his seventh-career Summernationals victory.

“I just tried to stay smooth, run my race and keep him held off,” Shirley said of his battle with Logue. “I would try to run the bottom. … but for me to go in, turn and come off on the bottom, it wasn’t going to happen. What I tried to do is diamond up high and catch the crumbs in the middle. I think that saved me the victory for sure.”

While cars battled from top to bottom on the fairground oval’s wide racing surface, the 11th-starting Logue stayed glued to the bottom of the track in making his charge to the front.

He was up to second when the lap-31 caution erased Shirley’s lead, but his bid to score his first series victory fell just short.

“I just needed about a half more lap and I think I would’ve got Brian,” said Logue, who was competing for the first time on this year’s tour. “This was one of my favorite tracks back when I ran modifieds and I could always run in the bottom pretty good. I thought tonight if kept my nose clean for 40 laps and just bide my time and we could’ve been there.

“It was just one of them deals where I think I was better, but he had the preferred line.”

Wendell Wallace of Batesville, Ark., ran among the top three for the entire race and was second until Logue took the spot following the lap-24 restart. He wasn’t too far behind the leaders during the final run to the finish, but settled for third ahead of fifth-starting Jason Feger of Bloomington, Ill.

Jon Henry of Ada, Ohio, who scored his first series victory during Tuesday night’s race at Spoon River Speedway, advanced from his 15th starting spot to round out the race’s top five finishers.

The lap-24 caution that first slowed the pace appeared when second-running Jason McBride of Carbondale, Ill., spun to avoid two lapped cars that had slowed on the back straightaway.

The second caution was caused by a tangle between Brandon Sheppard of New Berlin, Ill., and Dennis Erb Jr. of Carpentersville, Ill., that left Erb facing the wrong direction in the middle of turns one and two.

Fourth-starting Kevin Cole of Christopher, Ill., battled for the second spot for the first half of the race, but pulled off the track during the lap-24 caution.

Notes: Shirley’s Pierce Race Car is powered by a Pro Power Engine with sponsorship from Jayco Construction, Skateland South, Allstar Performance, Kim’s Auto Body, and JFR Graphics. … The event was delayed for more than an hour by extended track prep caused by a rain shower that moved over the track late in the afternoon. … The triumph was Shirley’s fourth overall on the season. … Shirley’s most recent Summernationals victory came June 30, 2010 at Charleston (Ill.) Speedway. … The series moves to Tri-City Speedway in Pontoon Beach, Ill., Friday night for a $10,000-to-win event.

The 22-car starting field rolled on the track at 11:45 p.m. ... Brian Shirley will start from the pole after a redraw among heat race winners. He'll be joined on the front row by Jason McBride while Wendell Wallace and Kevin Cole will share row two. ... Provisional starting spots go to Ryan Unzicker, Rusty Schlenk and Jerry Lierly. Bobby Pierce earned the track provisional with his third-place B-main finish. ... Brian Shirley said his turn-four bobble the nearly cost him the lead late in his race was due to simply running too hard. He added that he couldn't see his crew member that was giving hand signals too tell him he had a large lead over second-place Shannon Babb. Shirley had appeared to hit the wall during the incident, but said that he just caught the cushion awkwardly. ... Kevin Cole is looking for his first Summernationals victory, but he said he'll be happy with a top-five finish. If he is to stay up front, he'll likely stay away from the track's middle lane. After leading from the start of his heat race, Cole moved down to the middle groove late in the race to "take it easy and stay away from the cushion." The groove switch slowed Cole's pace considerably and Frank Heckenast Jr. and Brandon Sheppard caught him in the closing laps. ... Wendell Wallace is making just his second visit to Fayette County, and the quarter-mile oval's track surface is much different than he remembered from his trip four years ago. "This thing is pretty racy tonight," said Wallace, who'll start third in the feature. "That one time I was here we were all pretty much down around the bottom. I think that rain early really helped it."

Mike Spatola started up front in the B-main and led every lap for the victory. Dennis Erb Jr. moved forward from his fifth starting spot and took the second spot to also transfer to the main event. With Fayette County not hosting Super Late Models regularly, the track provisional was to be awarded to the B-main's third-place finisher. Outside polesitter Mark Bugtorf held the spot for most of the race, but Bobby Pierce rallied on the high side and took the spot on the final lap. The two drivers had battled side-by-side for the position for most of the last five laps, and Pierce put himself in position to complete the pass even though Burgtorf slid high of the exit of turn four coming to the white flag and forced Pierce to briefly run off the top of the racetrack and onto the exit lane along the front straightaway.

Polesitter Kevin Cole led every lap of the caution-free race, turning back late challenges from Frank Heckenast Jr. and Brandon Sheppard. With Cole running the middle groove of the racetrack, Sheppard used the high side to nearly pull alongside Cole at the exit of turn two on lap eight of the 10-lapper with Heckenast looking under both cars in the low groove. Sheppard bobbled in turn four on the same lap, allowing Heckenast to ease ahead for second. Heckenast looked under Cole for the lead on the final lap, but Cole held on to the position. Sheppard was third with Kevin Weaver taking the fourth and final transfer position in the caution-free race.

Brian Shirley survived a pair of scrapes with the turn-four wall late in the race and held off Shannon Babb and Kyle Logue at the finish. Shirley grabbed the lead from the outside pole and opened a comfortable gap over polesitting Babb throughout much of the distance. But Shirley made heavy contact with the wall at the exit of turn four at the completion of lap seven and had a lessor brush in the same spot a lap later. Each of the inncidents allowed Babb and Logue to close in, but neither could complete the pass. Babb settled for second followed by Logue in third and Jon Henry in the fourth and final transfer spot. Babb fell back to third on the first attempt to start the race, but a spin by Chad Stapleton in the first corner set up a complete restart.

Jason McBride outdueled polesitter Dillan White on the opening lap and held command for the entire distance of the caution-free race. White held off Nick Bartels to finish second while Jason Riggs grabbed the fourth and final transfer spot on the high-speed racing surface.

Second-starting Wendell Wallace overtook polesitter Jason Feger on the start of the 10-lap prelim and led every lap of the caution-free race. Feger finished second, a half-straightaway behind Wallace while Billy Moyer Jr. held off Greg Johnson for third. Johnson was fourth in a race that transferred the top four to the main event.

Babb, the current points leader on the tour, will start from the pole of one of four heat races coming up at the fairgrounds racetrack. Other heat race polesitters after group qualifying: Feger of Bloomington, Ill.; Dillan White of Crofton, Ky.; and Kevin Cole of Christopher, Ill.

Each of the 10-lap prelims will transfer the top four finishers into the first eight rows of tonight’s 22-car feature lineup. Consolation races and provisional starters will makeup the back two rows for the 40-lap, $5,000-to-win event.

Hot laps began just after 8 p.m. following extended track prep. ... A brief rain shower moved over the track at about 5:45 p.m., but only last for roughly 15 minutes. Race officials appear to be moving along with the program as scheduled. … Reigning series champion Shannon Babb of Moweaqua, Ill., continues to lead the points standings after another top-five run at nearby Highland Speedway Wednesday night. Babb’s 458 points leads Brian Shirley (430), Billy Moyer Jr. (401), Jason Feger 370 and Ryan Unzicker (360). ... Dennis Erb Jr. of Carpentersville, Ill., is back in own car for tonight's race after a mechanical issue with his team's hauler forced him to drive Jerry Lierly's backup car at Highland. ... Steve Casebolt of Richmond, Ind., will enter his first race on this year's tour tonight at Fayette County fresh off a week-long vacation in Myrtle Beach, S.C. ... After struggling in last night's event at Highland, a tight quarter-mile, Dillan White of Crofton, Ky., remembered how unusual some of the Hell Tour tracks can be. "Some of these places like Highland are just tough to get a handle on," he said. "I should have come over here and ran some of these tracks earlier this year." ... Former series champion Jason Feger of Bloomington, Ill., scored his most recent Summernationals victory in last year's series race at Fayette County. The fairgrounds oval has hosted five series events since 2002 with Jeep Van Wormer, Dennis Erb Jr., Randy Korte and Shannon Babb winning those races.