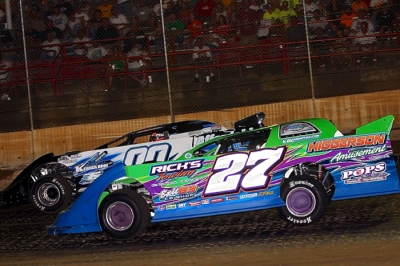 HIGHLAND, Ill. (June 20) — Completing a furious late charge from outside the top five, Rodney Melvin of Benton, Ill., made a dramatic final-lap pass of polesitter Randy Korte Wednesday night at Highland Speedway to earn a $5,000 victory in the seventh round of the at UMP DIRTcar Summernationals. | Complete Summernationals coverage

The seventh-starting Melvin didn’t crack the top five until lap 28 of the caution-free 40-lapper, but he hugged tight to the bottom of the quarter-mile track and ran down the leaders in the closing laps.

He moved by Jason Feger of Bloomington, Ill., for second at the completion of lap 38 and was alongside the high-running Korte at the exit of turn two on the following lap. Korte pulled back ahead down the back straightaway and dove to the bottom entering turn three. But his car slid slightly in the middle of the corner, opening the door for Melvin to pull alongside.

Korte led by a nose as the two leaders took the white flag, but Melvin pulled ahead exiting turn two on the final lap and led by a car length at the finish to notch his seventh-career victory on the month-long series.

“Me and (Wendell) Wallace where battling there in the mid part of the race, and I knew if I could ever get clear and get free, open track that we had a pretty good car,” said Melvin, who ran seventh for most of the first half of the race. “I didn’t know how far Korte and Feger got out there, but I could see we kinda ran them down. Them last five laps, the car just kept getting better and better.”

Korte settled for the runner-up finish at his hometown track, just ahead of Feger. Reigning series champion and current points leader Shannon Babb of Moweaqua, Ill., was fourth with outside polesitter Brian Shirley of Chatham, Ill., rounding out the top five.

Melvin’s victory was aided by a gamble on tires that paid off late. Even after track crews reworked the track surface just before the race, the veteran UMP racer bolted on 40-compound tires—the hardest allowed in UMP competition. The harder tires came on strong late in the race while others faded on softer compounds.

“The last three or four years we’ve usually been on 20 (compound tires), but we went out there to lineup and I seen where they worked the track,” Melvin said. “It was kind of a gamble, but it worked out good for us.”

Korte, who was looking for his first Summernationals victory since 2009, said a softer tire choice caused him to fade at the end.

“We was worried that if we didn’t put the softer rubber on that we was gonna be hurting the first part of the race cause we knew the top and the middle would be good. We went soft and I thought at the end of the race we might be in trouble. It ended up working out how I thought it was going to.

“I actually think I probably messed myself up by going to the bottom when I seen him. Once you got a 20 on, you go down in that shine and it’s not gonna stick. That’s definitely what it did.”

Melvin’s victory came in his first start on this year’s tour and just his fifth start of the season overall after he was slowed early in the year while recovering from surgery. With plans to compete in the tour’s next few events at tracks he typically runs well at, Melvin is confident he’ll return to victory lane again soon.

“It really makes you feel good about yourself to come out only racing five times and these guys have raced on this deal and we come out and take a win,” said Melvin, who’s most recent Summernationals victory came last season at Fairbury (Ill.) American Legion Speedway. “Now we go to Brownstown and Granite Cite and Fairbury. I feel pretty good; I think we can get a couple more wins through the week.”

Notes: Melvin's Pierce Race Car is powered by a Pro Power Engine with sponsorship from Melvin's Collision & Auto and Higgerson Amusement. … Sixteen of the race’s 22 starters were running at the finish with all 16 on the lead lap. … The 25-lap UMP Modified feature also ran caution free. … The Summernationals moves to Fayette Count Speedway Thursday for another $5,000-to-win event, followed by $10,000-to-win events at Tri-City Speedway in Granite City, Ill., Friday and Fairbury (Ill.) American Legion Speedway on Saturday.

Drivers were called to staging at 10 p.m. and cars began rolling on the track around 10:15. ... Billy Moyer Jr. and Mike Spatola will use series provisionals to start the main event while Frankie Martin will use the track provisional and Rusty Schlenk will use the UMP national points provisional. … Track crews have reworked the track surface, forcing teams to rethink they’re tire strategies for the main event. “It’s going to be a tough choice,” said polesitter Randy Korte, adding that he wished the track, which locked down during the B- and C-mains, had been left alone. “That would have been best for me, but I can understand they want good racing for the fans, so we’ll see what happens.” … One driver happy to see the reworked racetrack is last night’s winner Jon Henry. He was one of the biggest movers during heat race action, advancing from eighth to fourth. Making his debut at Highland, Henry says he likes the tight quarter-mile track. “Running up there on the top is a lot of fun,” he said. “You have to go slower up there than you would think or else you’ll end up knocking down the wall.” ... Randy Korte will start from the pole of the main event after a redraw among heat race winners. Brian Shirley will join Korte on the front row while Jason Feger and Shannon Babb will share row two.

Driving Jerry Lierly's backup car, Dennis Erb Jr. got the jump on fellow front-row starter Tanner English and led every lap for the victory. English fended off early challenges from Mike Spatola and Michael Kloos and finished nearly a straightaway behind Erb in the second. He'll join Erb in transferring to the main event. The race was slowed by a debris caution with two laps complete. Erb is in Lierly's backup car tonight due to mechanical troubles with his hauler on the way to the track this afternoon.

Randy Korte will start from the pole in tonight's 40-lap main event after a redraw among heat race winners. Brian Shirley will join Korte on the front row while Jason Feger and Shannon Babb will share row two.

Second-starting Randy Korte cleared polesitter Wendell Wallace on lap two and pulled away in a race that ran caution-free. Fourth-starting Kevin Weaver advanced on the high side to challenge Wallace for second, but Wallace claimed the spot by less than a car length at the finish. Weaver settled for third with Brandon Sheppard just behind in fourth to also transfer to the feature.

Shannon Babb used the low groove to rally from his fifth starting spot and overtook outside polesitter Rodney Melvin midway through the race. The high-running Melvin, tried to switch grooves just before Babb made the pass, but his move to the bottom was too late. Babb pulled ahead and led the remaining distance. Melvin outdueled polesitter Frank Heckenast Jr. follow a mid-race restart and finished second. The high-running Heckenast faded after contact with the wall damaged his right-side spoiler, but he was able to hold off Mark Burgtorf for third. Burgtorf settled for the fourth and final transfer position. The race was slowed midway through when a mid-race tangle back in the pack left Caleb Ashby's car facing the wrong direction in turn two. Ashby's car was towed to the infield.

Brian Shirley moved to the lead from the outside pole and held off polesitter Bobby Pierce throughout the caution-free race. Pierce trailed Shirley the whole way, but with both drivers running the top side of the track, he couldn't find a way around. He dove to the bottom of the track on the final lap, but the move didn't stick and he settled for second. Jason McBride and Chad Zobrist were third and fourth to also transfer to the feature.

Outside polesitter Jason Feger outdueled fellow front-row starter Ryan Unzicker over the race's first two laps and used the high side of the race track to pull away to victory in the 10-lap prelim. Unzicker fell back to third after losing the lead to Feger, but jumped to the high side and retook second from Kevin Cole. Unzicker finished second in the caution-free race with Cole third. Jon Henry rallied on the top from his eighth starting spot and overtook Tanner English late in the race to claim the fourth and final transfer spot.

Unzicker, who won during the tour's visit to Wilmot (Wis.) Speedway on Sunday, will start from the pole of the first of four heat races coming up at the tight quarter-mile oval. Other heat race polesitters unofficially: Bobby Pierce of Oakwood, Ill.; Frank Heckenast Jr. of Frankfort, Ill.; and Wendell Wallace of Batesville, Ark.

Each heat race will transfer the top four finishers to the night's 40-lap, $5,000-to-win main event. The remainder of the 22-car field will be determined by consolation races and provisional starters.

With his runner-up finish at Spoon River Speedway Tuesday night, reigning series champion Shannon Babb of Moweaqua, Ill., overtook Billy Moyer Jr. of Batesville, Ark., atop the series standings. Babb’s 393 points leads Brian Shirley (370), Moyer (364), Ryan Unzicker (307) and Jason Feger (300). … With three victories, Moyer is the only driver with multiple victories in the tour’s first six races. However, Moyer has finished poorly in the three races he didn’t win, including last night’s 19th-place result after he had to go to a backup car. Moyer said this afternoon that a faulty lifter in the engine of his race car was the culprit, adding that the engine needed refreshing anyway. He’s replaced the engine and is back in his primary car tonight. … Dennis Erb Jr. is driving Jerry Lierly’s backup car tonight after Erb’s hauler broke down on the way to the track. He said he expects to pick the hauler up from the shop tomorrow morning, but doesn’t know if he’ll head to the tour’s next event at Fayette County Speedway in Brownstown, Ill., or head south to rejoin the Lucas Oil Late Model Dirt Series for a weekend doubleheader at Cherokee Speedway in Gaffney, S.C., and Wythe Raceway in Rural Retreat, Va. … Kevin Weaver of Gibson City, Ill., scratched from Tuesday’s C-main due to a blown head gasket in his race car’s engine, one of Weaver’s crew members reported. Repairs have been made and Weaver is back in action tonight. … Indiana drvier Chad Stapleton has rejoined the tour for Highland’s race, but he isn’t overly optimistic about his chances tonight. “This is the kinda place where you gotta back it in the corners and I ain’t too good at that,” he said. Stapleton plans to follow the tour for it’s next few events.