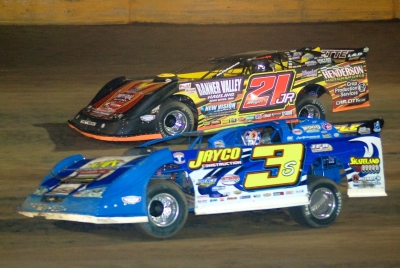 NEW RICHMOND, Wis. (June 15) — Outside front-row starter Billy Moyer Jr. of Batesville, Ark., withstood challenges from a pair of Brians on Friday at Cedar Lake Speedway for a flag-to-flag victory in the third leg of the UMP DIRTcar Summernationals.

The 24-year-old Moyer, who entered the season without a series victory, notched his second triumph in three nights in pocketing $5,000 at the 3/8-mile oval that wasn’t among his favorites — until now. | Complete Summernationals coverage

“That’s the most fun I’ve ever had inside a car. Don’t get me wrong, I looked beside me sometimes ... but that’s the most fun. If I’d have run second, I promise I’d be just almost as happy,” Moyer said after his fifth victory overall in his last 10 starts. “That was just so much fun. The car was perfect. ... all the people on my car just do so much, I can’t thank ‘em enough.”

Brian Birkhofer of Muscatine, Iowa, who made an outside move to take second from the polesitting Brian Shirley of Chatham, Ill., on the 26th lap, finished second in the 30-lapper while Shirley was third. Billy Moyer, the winner’s Hall of Fame father, was fourth and Jimmy Mars of nearby Menomonie, Wis., rounded out the top five in the caution-free event that lasted less than nine minutes.

The younger Moyer added the Cedar Lake victory to Wednesday's flag-to-flag triumph at Brownstown (Ind.) Speedway in the series opener and solidified his position in the $25,000 series points chase. He entered the event in fourth and should move up among the top two when official points are released Saturday morning.

Shirley started on the pole but Moyer got the jump, touring the middle of the track most of the way around in controlling the first 10 laps. But Shirley moved up to challenge before the midway point, pulling alongside more than once and edging ahead one time through turns three and four although Moyer swept back around at the start-finish line.

“I actually felt like I had the better car, he was in really the best spot. He had a good car too — I’m not saying he didn’t have a good car,” Shirley said. “I was a good race. We tried the best we could to get by him. I had maybe one shot I think I could’ve drove it in pretty hard to get him, but it just leaves the mutual respect good between us. He’ll remember it when the roles are reversed.”

Shirley’s pursuit of Moyer was joined by Birkhofer in the race’s late stages, and Birkhofer made an outside pass of Shirley on the 26th lap to reach the second spot. He staying within striking distance of Moyer but couldn’t find away past in the closing laps.

“He did a helluva job. His car’s good ... he drove an excellent race. I just, we needed to be a little bit better obviously. We’ll work on our stuff and go tomorrow and congratuations to him,” Birkhofer said. “He’s smooth. He never let the guy in second get that clean enough to where that guy could dictate where he had to be. He always kept the lead to that point ... and Shirley raced him clean, too. Obviously he did a good job.”

Notes: Moyer's Victory Circle Chassis has a Pro Power engine and sponsorship from Banner Valley Hauling, Henderson Motorsports, Imperial Motors and Car City. ... Twenty of 22 starters completed 30 laps. ... Dennis Erb Jr. pulled pitside after 11 laps and Bobby Pierce retired on lap 23. ... Ninth-place finisher Shannon Babb drove most of the race without power steering. ... The series remains at Cedar Lake on Saturday for a $10,000-to-win event that caps the Masters weekend; USMTS-sanctioned modifieds will be in action again, too.

Polesitter Billy Moyer got the jump and ran unchallenged for a 10-lap victory over fellow front-row starter Jimmy Mars, who dueled with third-starting Chad Simpson on the first lap. Simpson settled into third, where he finished, and Andrew McKay got the fourth and final transfer spot after getting a little heat from Nick Bartels the first few laps of the caution-free prelim. There was little passing and Ryan Unzicker (seventh) and Chris Simpson (eighth) had disappointing finishes.

Winning a two-car breakaway, Billy Moyer Jr. topped fellow front-row starter Don O'Neal in the 10-lap prelim. O'Neal diamonded the corners in working Moyer, but couldn't find a way past. Jason McBride was fourth, although he held third until Frank Heckenast Jr. stole it at the white flag. Heckenast and Mark Voigt battled for the fourth spot most of the way with Voigt slipping ahead at the midway point, but Heckenast got the high side working to reclaim the final transfer spot and overtake McBride in the late going. The first start was called back when Moyer Jr. jumped in turn four and another yellow appeared on the second lap when Kathy Jarvis was facing the wrong way on the backstretch.

Outside front-row starter Brian Birkhofer pedaled hard through turns one and two on the first lap, sweeping past polesitter Shannon Babb on the backstretch of the first lap on his way to thrilling victory. Babb never gave up, pressuring Birkhofer high and low the rest of the way in an entertaining — but apparently contact-free battle — that saw them side-by-side the complete sixth lap. Birkhofer edged ahead on the ninth lap, but Babb nearly snuck by in trying to nose Birkhofer at the checkers. Jason Rauen was further back in third while Terry Casey got the fourth and final transfer spot. Charlie McKenna slowed and pulled to the infield on the third lap.

Getting a big jump at the outset, fast qualifier Brian Shirley cruised to an easy victory in the first 10-lap heat race. Fellow front-row starter Brady Smith was five lengths behind entering turn one and never recovered, although he was able to keep Brandon Sheppard at bay thorughout the race in finishing second as most of the cars stuck with the low groove. Sheppard got the third spot in a top-three breakaway while Tim Isenberg got the fourth and final transfer spot over Dennis Erb Jr., who moved up two spots early but settled into fifth. Jason Feger wasn't a factor in sixth.

Brian Shirley of Chatham, Ill., rebounding from a spin in Thursday’s series race at Kankakee, Ill., topped 37 qualifiers Friday at Cedar Lake Speedway on the third leg of the UMP DIRTcar Summernationals.

Four drivers apiece will transfer from four heat race followed by a C-main and B-main that sends two drivers to the main event. Four provisional starters will round out the 22-car field.

Cedar Lake, the only track to host multiple Summernationals races, has a $10,000-to-win event set for Saturday.

Jason Rauen holds the track record at 12.972 seconds set in 2011. ... Jason Feger pulled off the track with problems in hot laps and the team swapped batteries to solve the issues. ... With recent rains that cancelled Thursday’s non-Late Model racing program at Cedar Lake, there’s plenty of moisture in the track. During Friday afternoon track prep, Billy Moyer Jr. sat above turn one on his four-wheeler watching. “These guys better have their seat belts on tight,” the Brownstown, Ind., winner said, expecting a hammer-down surface. ... Hollywood stuntwoman turned Late Model driver Kathy Jarvis of Park City, Utah, has been plagued by steering problems the first two nights, but she has worse problems at Cedar Lake. Her rented RV has major engine problems that appear terminal. “I just want to cry today,” Jarvis said, frustrated with her first three days of the Hell Tour. ... UMP series director Sam Driggers clarified a second-lap yellow flag that flew Thursday night at Kankakee when Ryan Unzicker was restored to his running position. Driggers said Unzicker never stopped on the track after a spin and said officials “prematurely threw the caution flag,” the reason Unzicker didn’t go to the tail. ... Besides UMP’s usual LM20, LM30 and LM40 Hoosier Tires, the WRS55 tire (a near-identical compound to the LM40) is also legal. It’s a tire run by many non-UMP regional drivers on hand at Cedar Lake. ... The two-division program also includes the United State Modified Touring Series, which runs a pair of $2,000-to-win events on the weekend. There are 40 modifieds in action.