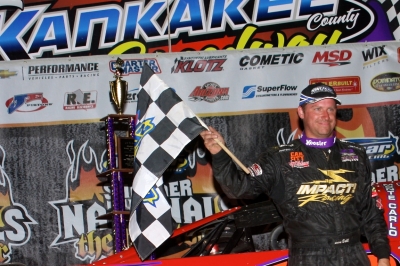 Babb, who won the final six points races consecutively last season, earned $5,000 in taking the second leg of the 29-race series, which winds to 28 tracks in eight states over 32 days. He survived a lap-37 bobble after a restart between turns three and four that allowed Moyer to briefly pull alongside. | Complete Summernationals coverage

“I was definitely looking over my shoulder — that’s probably why I bobbled,” Babb said of the final four laps. "I saw (Moyer) there, and I was waiting for a late-race slide job or charge or something. I didn’t know where it was going to come from. I was just happy to hold ‘em off.”

The polesitting Babb led all the way, building a full straightaway lead by the halfway point over Moyer in dominating the 40-lapper. But his progress slowed in the final 15 laps, and when Brian Shirley’s turn-one spin on lap 36 slowed the action, Moyer and Pierce — who started fifth but slipped back a position before finding success in the low groove — took their best shots.

Babb got going again in the high groove, but struggled a bit exiting turn four as Moyer pulled alongside at the top of the frontstretch just after the final restart. But Pierce slipped under Moyer and took up the chase of Babb, doing his best to track down the leader.

Pierce never got close enough to take a serious stab as Babb closed out the victory, his second series triumph at Kankakee and the 73rd of his Summernationals career.

“They doused it with a pretty good load of water (before the race) but you know, they had a caution with four (laps) to go, and soft tires were good way low on the bottom,” Babb said. "We just stuck to our guns and followed through with the hard tires.”

Three cautions slowed the action, the first for Ryan Unzicker’s early spin and then on the restart when Jason McBride pirouetted on the frontstretch in a scramble near the back of the pack. The final yellow appeared for Shirley, who spun to avoid contact with Casey in a battle for fifth.

Polesitter Scott Schmitt fought off a late challenge from Dennis Erb Jr. and Don O'Neal for a victory in the B-main. Erb got the second and final transfer spot as he worked the low groove and O'Neal the high groove in the closing laps. Shawn Toczek took fourth from front-row starter Mike Provenzano on the final lap.

Nick Bartels and Scott Bull raced to victories in C-mains to earn seventh-row starting spots in the B-main. The lone caution in the first consy came when Kerry Mathew and Torin Mettille ended up spinning on the backstretch with Mathews being towed away. In the second consy, Randy Manos spun in turn four for a yellow. Wendell Wallace made a late charge to get the final transfer spot from Jerry Lierly in the first race, but couldn't find a way past.

Shannon Babb got the pole in the redraw among heat race winners. Terry Casey will start alongside with Billy Moyer and Brian Shirley start in the second row. ... Wendell Wallace will have to run a C-Main after a heat-race spin; he lost control when he tried to avoid a sideways Scott Schmitt. ... Billy Moyer Jr. blamed his heat-race spin on his own mistake, and he'll have a lot of work to do in coming through the consolation races. ... Jason Feger made the most dramatic pass of the heats, working Ryan Unzicker all race long before making a high-side pass off of turn four and nipping Unzicker at the checkers for second. "Luckily, he left me enough room" to slip by, Feger said.

Outside front-row starter Brian Shirley raced to his second heat race victory in as many nights, surviving a lap-five miscue that saw him nearly get into the wall in turns three and four. A mid-race caution robbed Shirley of a near-straight lead, but he rebuilt it after allow polesitter Frank Heckenast Jr. to move back in. Heckenast finished a distant second while Jay Morris was third. Mike Spatola, last year's series winner at Kankakee, got the fourth and final transfer spot. Randy Manos spun in turn four to draw a lap-four yellow flag.

Staying ahead of a tight battle for second, polesitter Terry Casey won the third heat. Ryan Unzicker and Jason Feger mixed it up for second early in the race with both swapping grooves in trying to chase down Casey. Dennis Erb Jr. moved into the mix halfway through the race, but a lap-seven slipup allow Chris Simpson past on the backstretch. Feger made an outside pass out of turn four on the final lap to grab the runner-up spot, while Unzicker and Simpson were third and fourth to transfer to the main. Erb ended up fifth and Don O'Neal sixth. The lone caution appeared on the fourth lap when Jerry Lierly spun in turn four by himself.

Shannon Babb got the jump on polesitter Bret Sievert from outside the front row and rolled to victory in the second heat. Third-starting Chad Simpson quickly moved up to second and held that spot the rest of the way while a high-flying Kevin Weaver, who started fifth, moved around Sievert for third midway through the race. Sievert regained the spot on a lap-six restart while Weaver settled for fourth and the final transfer spot. Mike Provenvano pressured Weaver late but finished fifth. The lone caution appeared on the sixth lap when fourth-starting Billy Moyer Jr., last night's winner in Brownstown, Ind., ended up facing the wrong way in turn two.

Polesitter Billy Moyer cruised to a 10-lap victory in the first heat while fifth-starting Bobby Pierce worked under Jon Henry after a mid-race restart to get the second spot. Brandon Sheppard also went past Henry to grab third and Henry settled for the fourth spot. Scott Schmitt started outside the front row, but faded early and failed to transfer to the maine event. Wendell Wallace spun on the fifth lap while battling Schmitt for fifth to draw a caution.

Four drivers apiece from each of four 10-lap heat races transfer to the main event, along with two drivers from the B-main. One or two C-mains will be contested as well before the $5,000-to-win, 40-lap main event.

Jason McBride lost power on the second of his two qualifying laps. ... Kevin Weaver of Gibson City, Ill., enters the event a perfect 5-for-5 in 2012 action at Kankakee and leads the track points. Weaver, who scratched from Wednesday’s action at Brownstown with engine problems, owns the Kankakee track record with a 13.413-second lap set April 20, 2007. “We don’t want to break the streak or anything,” said Weaver, who plans to drive his Bill West Enterprises car after the engine failure in his Pierce Race Car the previous night. ... Don O’Neal and Moring Motorsports crew chief Ronnie Stuckey watched track prep Thursday afternoon as the water truck circled the track. “O’Neal said water, water,” Stuckey joked about his driver who isn’t afraid of hammer-down surfaces. “Give the guy a Bud Light and put him out there again.” ... Billy Moyer Jr.’s victory, along with 79 victories by his father, made them the second father-son combination with career victories on the tour. ... The first and only other father-son pairing with tour victories are Steve Sheppard Jr. and Brandon Sheppard. ... Besides Late Models, modifieds, stock cars and sport compacts are in action at Kankakee ... From here, teams head to Cedar Lake Speedway in New Richmond, Wis., for a Friday-Saturday doubleheader.