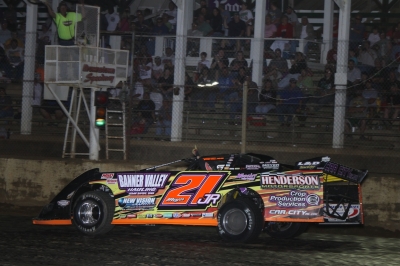 The 24-year-old Moyer, who started on the pole alongside his 54-year-old father, a six-time series champion, build leads of as much as a straightaway in cruising to his $5,000 payday in the first of 29 events over 32 days. | Complete Summernationals coverage

It was a special victory for a youngster who, as a teenager, traveled the Midwestern highways along with his father in piling up many of his series-leading 79 career victories.

“I’ve been around this my whole life, and like during the summer, when I wasn’t in school, I was on the Summernationals here on these tracks, little-bitty joints,” Moyer said. "It’s just not sunk in yet ... $5,000 is awesome, but I don’t care of it was $2,000. I just wanted to win one of these Summernationals.”

Third-starting Brian Shirley of Chatham, Ill., took the second spot from the elder Moyer on the sixth lap, but he spent the rest of the way fighting off father while son ran off and hid despite five caution periods.

Shirley and Moyer Sr. were second and third while Terry Casey of New London, Wis., was fourth. Jason Jameson of Lawrenceburg, Ind., rounded out the top five finishers.

Among the five yellow flags, the most serious came on a lap-13 restart when surprising heat race winner Jeremy Hines of nearby Seymour and Mike Spatola of Manhattan, Ill., tangled in turn two, damaging the nosepiece of the Hines machine and flattening Spatola’s left-rear tire.

Other cautions appeared on lap 11 for Chad Stapleton’s solo spin in turn three, for a Stapleton-Frank Heckenast Jr. double-spin between turns one and two on lap 13, for Dillan White’s demise on lap 31 and finally another Stapleton spin on lap 37.

The tour moves to Kankakee County Speedway in Kankakee, Ill., on Thursday for the second leg, a $5,000-to-win event.

Polesitter Dennis Erb Jr. cruised to victory in the B-main, while the second spot was a hot potato. Bobby Pierce held the runner-up spot early, but Brandon Sheppard made a nifty crossover move to get the position midway through the race. But veteran Steve Barnett got rolling late and made a last-lap pass to take the final transfer spot (we'd incorrectly posted before that four drivers transferred). ... Sheppard received a provisional starting spot based on last year's series points while other provisionals went to Rusty Schlenk (UMP weekly point), Chad Stapleton (track) and Bobby Pierce (series points).

Justin Rattliff won the first C-Main over Joe Godsey, who is driving the No. 11 Rayburn Race Car that Shane Cottle drove at Florida Speedweeks. ... Cottle, who does most of his racing in sprint cars, plans to field the John Hollified-owned No. 31 more this season after winning a Dream XVIII qualifying race last weekend at Ohio's Eldora Speedway. ... First-year Late Model driver Daniel Flessner held the second spot in the first C-main when he got out of shape in turn four, and he curled his nosepiece under to hamper his steering and he faded the rest of the way. ... In the second C-main, fourth-starting Brad Neat worked on polesitter Jon Henry for many laps before taking command. Henry fnished second to transfer to the B-main as well. ... Don O'Neal finished fourth and is done for the night (unless he's added as a track provisional). ... Frank Heckenast Jr. set fast time and ran second most his heat race, but he got shuffled back to fourth at the finish. He blamed it on inconsisten laps. "We'll be all right," he said. "Our car's better than us right now." ... Fresh off a seven-day vacation in the Bahamas, Heckenast plans to tackle the full series.

In the redraw among heat winners, the son-and-father combination of Billy Moyer Jr. and Billy Moyer Sr. got front-row spots with Brian Shirley and Jeremy Hines making up the second row. ... Brad Neat, who had to restart on the tail of his heat after being spun by Don O'Neal, didn't seem to upset about his fortunes. "That kind of stuff happens," the Kentucky driver said while checking his starting spot for the C-man. At best, he'll start 14th in a B-main that takes the top four finishers in just 12 laps. "It'll be tough," said Neat, who managed to pass only two cars after restarting on the tail of his heat. ... Jason McBride looked to have second spot in hand in the fourth heat when he got sideways in turn two and ended up going through the infield. He fell back to fourth but settled down and got the third spot from Wendell Wallace on the penultimate lap. "I knew my limits then," McBride said with a laugh about his near-spin.

In a race where two of the top contenders had to restart on the tail early, outside front-row starter Brian Shirley cruised to a victory over fellow Illinois driver Jason Feger, who started third. Jason McBride, surviving an infield foray early in the race, took third from Wendell Wallace on the second-to-last lap as both transferred to the main. The race began with a touch of controversy. Polesitter Brad Neat was battling Shirley for the lead early when the fourth-starting O'Neal made contact entering turn one, sending Neat for a slow spin. Officials put Neat and O'Neal on the tail for the restart with one lap complete.

Six-time series champ Billy Moyer cruised to victory from outside the front-row while polesitter Dillan White finished a half-straight back in second. Cody Mahoney, Don O'Neal's crew chief making just his third driving appearance of the season. went around Ryan Unzicker before the white flag for third. Unzicker, working the low groove, held on to the fourth and final transfer spot while Brandon Sheppard was just behind in fifth.

In a race where four cars had a chance to win on the last lap, outside front-row starter Billy Moyer Jr. captured the caution-free prelim, leading every lap. Polesitter Frank Heckenast Jr. moved in to challenge in the low groove late, but fifth-starting Jason Jameson slipped under him and provided Moyer's stiffest challenge at the finish. Heckenast dropped to fourth behind James at the dramatic finish while Joe Janowski was a distant fifth.

Getting the jump from outside the front row, surprising local Jeremy Hines raced to victory in 2012's first series prelim. He ran the high side most of the race with polesitter Terry Casey futilely giving chase. Sixth-starting Mike Spatola used the low groove to get third and reigning series champ Shannon Babb got the fourth and final transfer spot in the caution free prelim. Dennis Erb Jr. nipped Bobby Pierce for fifth at the line.

Frank Heckenast Jr. of Frankfort, Ill., topped 49 qualifiers Wednesday at Brownstown Speedway in the first leg of the 29-race UMP DIRTcar Summernationals. Heckenast turned a lap of 14.830 seconds at the quarter-mile oval.

Heckenast will start on the pole of his heat race. Other heat race polesitters, set by group qualifying, are Terry Casey of New London, Wis., Dillan White of Crofton, Ky, and Brad Neat of Dunnville, Ky.

Heat races start straight up after group qualifying with four transferring from each of four heats. The top two finishers from each of two C-Mains transfer to the B-Main, which sends two drivers to the $5,000-to-win, 40-lap main event.

Former series champ Kevin Weaver of Gibson City, Ill., scratched for the night after hot laps after blowing a motor. ... Jeremy Hines of Seymour, Ind., was second quick in the first group but required a push back to his pit stall. .... A soft spot in turn three has required a little extra car following time trials. ... Brownstown is debuting a new victory lane in the infield. The track moved the infield pit building to make way for the concrete pad that's lined by shrubbery. ... The small pit building was moved to the center of the infield closer to turns three and four and a small tower was added atop it so officials can get a better view of the action. ... Victor Lee of Danville, Ky., is piloting the Jack Rainey No. 49 driven the first half of the season by Greg Johnson, who’s not in action. ... Two UMP DIRTcar provisionals and potentially two track provisionals will be added to the 22- or 24-car starting field. ... Shannon Babb won last year’s series race at Brownstown after frontrunners Don O’Neal and Jeep Van Wormer tangled with 10 laps remaining. ... The series runs five straight nights over the first weekend. Following Brownstown is Thursday’s event at Kankakee County (Ill.) Speedway, a Friday-Saturday doubleheader at Cedar Lake Speedway in New Richmond, Wis., and Sunday’s race at Wilmot (Wis.) Raceway.