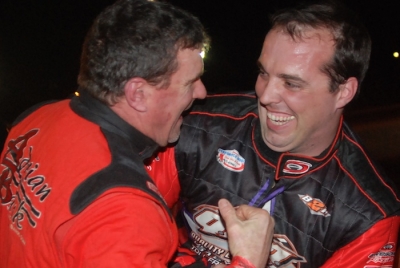 CLARKSVILLE, Tenn. (March 3) — Just in case Jesse Stovall thought he'd run away with a victory in Saturday's Tuckassee Toilet Bowl Classic, runner-up David Turner dropped by in victory lane at Clarksville Speedway to provide a review of the race.

"I was right on your butt," Turner excitedly told Stovall after giving the fellow Missouri driver a heartfelt hug following the second race of the season-opening weekend on the MARS DIRTcar Series. | Notebook | Slideshow

The 31-year-old Stovall knew all too well that he had company late in the 40-lap event that paid the Galena, Mo., driver $5,000 for his sixth career MARS victory.

"It made it a helluva race there towards the end, because I could hear his motor every lap," said Stovall, hung up behind slower traffic over the final 10 laps. "I was clinching my teeth and (gripping the steering wheel) because I didn't know what else to do. You know what I mean? Just try to keep a good steady pace and protect the bottom pretty good, and if he passed me on the outside, so be it. It was just one helluva night."

Stovall celebrated in victory lane with car owner Al Humphrey, Humphrey's wife Lori and other crew members before plopping down on Clarksville's toilet trophies, one of dirt racing's most unusual awards for a winning driver.

"It's a real neat deal when you get to win any race," Stovall said, "let alone something where you get a cool toilet like this."

Turner, of Creighton, Mo., posted a runner-up finish in his first weekend racing at Clarksville while outside front-row starter Brian Shirley of Chatham, Ill., who ran out front early before Stovall took the lead for good on lap 10, finished third. First-time Clarksville visitor Walker Arthur of Forest, Va., was fourth in his new MasterSbilt Race Car and R.C. Whitwell of Tucson, Ariz., stormed from the 24th starting spot to round out the top five. Polesitter Jason McBride of Carbondale, Ill., faded badly in finished 12th at the quarter-mile oval on a night when temperatures dipped into the 30s.

Stovall, who finished third in Friday's opener, enjoyed a successful weekend in his first starts for Humphrey, a 55-year-old Nebraska Racing Hall of Fame driver from Giltner, Neb., who has scaled back his driving in recent years. Stovall's primary car owner is Fred Bishop, who will field cars for Stovall in MLRA action this season, but Stovall was glad to connect with Humphrey, who he's become friends with over the past year or so.

"You just know when you've got a good race car, and it was an awesome race car," Stovall said. "I worked these guys to death this weekend. We all had a good team here, a bunch of people to help, and that helps."

"Honestly we were better than he was, I really think so," he said. "You know, we got around Brian Shirley and we moved right up on (Stovall). I got beside him once, and he shut the door on me ... me and him's good friends. It's early in the season, but I really wanted to win it. I thought I had the best car and he knew I did."

Shirley wasn't far behind in third, but he couldn't hug the inside lane like the two drivers who finished ahead of him.

"I just didn't feel that good on the bottom. ... they seemed like they could get off the bottom better than I could. I felt pretty good in the middle," Shirley said. "I don't know, I should've went harder probably on the right-front (tire). I think there late in the race, my car was a little better, but I was shoving the nose."

The main event was slowed by a single lap-five caution for the spinning cars of Tony Jackson Jr of Lebanon, Mo., and Kent Robinson of Bloomington, Ind. Jackson, whose Friday victory was the first of his car on MARS, ended up 10th.

Notes: Stovall's Victory Circle Chassis is sponsored by BSB Manufacturing. ... His previous MARS victory came Aug. 27, 2011, at Federated Auto Parts Raceway at I-55 in Pevely, Mo. ... Runner-up David Turner livened up victory lane with handshakes and hugs for Stovall, and he was excited that both Victory Circle Chassis were out of Billy Moyer's Batesville, Ark., shops. "I can't wait to call Billy," he said. Later, Turner said that "Moyer's really stepped an old man up, is what he did." ... Eighteen of 25 starters were running at the finish. ... Newcomers to Saturday's action who didn't compete Friday: Allen Christy, Clayton Miller, John Gardner, Chris Shelton, Michael Asbury, John Minon Jr. ... Among drivers failing to make the feature lineup was Greg Johnson, Friday's runner-up who broke in his heat race running a strong second. ... Others: Rodney Melvin, Chris Shelton, Mike Hammerle, Justin Asplin, Steven Ashby and Michael Asberry. ... Next up for the MARS circuit is a $3,000-to-win event March 24 at Springfield (Mo.) Raceway, an event co-sanctioned by the Lucas Oil MLRA series.