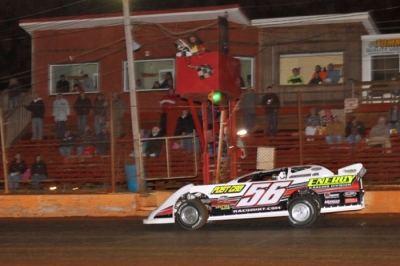 Jackson started on the pole for the main event, but outside front-row starter R.C. Whitwell of Tucson, Ariz., took the early lead and was in control before a lap-28 incident amid traffic. Whitwell was trying to work around slower cars when contact involving a slower car and Greg Johnson ended with Whitwell spinning. Fast qualifier Brad Looney was also caught up in the accident.

Inheriting the lead, Jackson took the green on a restart with two laps remaining and took the victory at the quarter-mile oval just south of the Kentucky-Tennessee border.

The third-starting Johnson of Bedford, Ind., finished second with fifth-starting Jesse Stovall of Galena, Mo., in third, nipping David Turner of Creighton, Mo. Ninth-starting Kent Robinson of Bloomington, Ind., rounded out the top five finishers in the 24-car field. The only other caution appeared on the ninth lap.

MARS action continues at Clarksville on Saturday with the $5,000-to-win weekend finale.

Notes: Jackson's Cornett-powered Rocket Chassis is sponsored by Post Cab, Energy Racing Division, Integra Shocks and Racindirt.com. ... Jackson's best MARS finish last season was third at Humboldt (Kan.) Speedway. ... Third-finishing Jesse Stovall fielded an Al Humphrey-owned No. 6. ... Reigning track champion Caleb Ashby of Cunningham, Tenn., finished 15th. ... Tanner English of Benton, Ky., finished sixth in his debut with Toone, Tenn.-based Upton Motorsports. ... Action was in doubt with forecasts for severe weather throughout the afternoon, but the weather cooperated enough on a day when dozens when more than 20 people were killed through Indiana and Kentucky as tornadoes dotted both states. ... Temperatures in the 70s in the afternoon dropped near 40 by the end of the night.