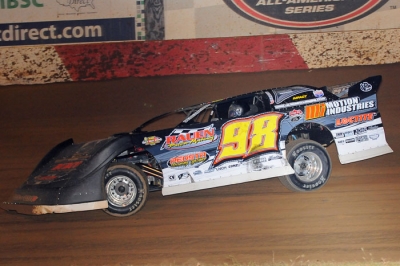 Rauen's second series victory of the season and third of his career paid $3,000 and prevented Lance Matthees of Winona, Minn., from sweeping the weekend action. Rauen used a high-side move in the closing laps to overtake Matthees for the victory. | Slideshow

Matthees and Chris Simpson of Oxford, Iowa, started on the front row with weather threatening at the track with the dirt-covered asphalt surface. Matthees grabbed the early lead with Chris Simpson, Rauen, Isenberg and Chad Simpson giving chase.

Chad Simpson moved up to third and, while battling with his younger brother in turns one and two, Chris Simpson spun on the sixth lap. As the yellow appeared other cars got together in turn four and John Kaanta's car ended up on its side.

On the restart, Matthees resumed his lead with Rauen in second as the Simpsons were sent to the rear. Matthees built nearly a straightaway lead ahead of Rauen, Isenberg and Mitchell, but the pursuers closed the gap when the leader hit traffic.

Rauen went to the high side and took command exiting turn two, using a slower car as a pick to overtake Matthees and lead the final two laps.