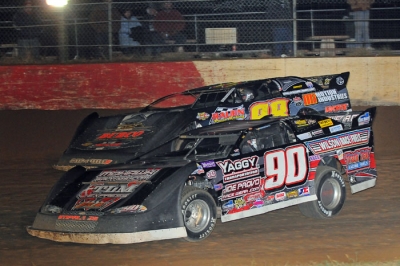 ELKO, Minn. (Oct. 14) – Veteran driver Lance Matthees of Winona, Minn., held off a hard-charging Jason Rauen of Farley, Iowa, Friday night at Elko Speedway to pick up a $2,500 payday during the first race of a doubleheader weekend that wraps up the season for the Dart Corn Belt Clash Late Model Series. | Slideshow

Matthees started on the pole by virtue of the draw and charged out to an early lead over Rauen, who also started from the front row. In heavy traffic, Rauen was able to work his way by Matthees and slowly began to pull away utilizing the middle groove. An early caution slowed the race as three cars, including the top-10 running machine of Dennis Erb Jr. of Carpentersville, Ill., tangled with lapped cars. After the brief caution, racing resumed it was Rauen out front followed by Matthees and Jason Utter of Columbus Junction, Iowa.

Matthees pressured Rauen on the low side as the two raced door-to-door for several laps with Matthees taking the lead with a handful of laps remaining. The night’s final caution came out with just three laps remaining, giving Rauen another shot at the leader. Matthees pulled away on the restart, but Rauen kept Matthees close, pressuring him till the wave of the checkered flag where he came up a car length or two short of Matthees, who became the tour’s seventh different winner on the season.

Series points leader Chad Simpson of Mount Vernon, Iowa, charged from 17th to seventh, giving him a 27-point lead in the standings over his brother Chris, who had mechanical problems in the main event, heading into Saturday’s finale at Elko. Chris Simpson of Oxford, Iowa, holds second by one point over Isenberg.