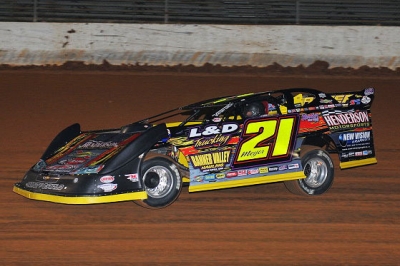 "He just overcharged the corner there a little bit,” Moyer, who recorded the 37th MLRA victory of his career, said of his winning pass of Stovall. “I just ran a little lower than he did."

Moyer encountered slower traffic during a final 11-lap green-flag run to the finish, but he avoided all obstacles for the win over his son Billy Moyer Jr. in the runner-up position. R.C. Whitwell of Tucson, Ariz., was third, while Stovall faded to fourth at the finish. Jack Sullivan of Greenbrier, Ark., rounded out the top five.

The championship battle remains tight after Friday’s race. John Anderson of Omaha, Neb., and defending champion Al Purkey of Coffeyville, Kan., entered the event tied atop the leader board. Anderson finished seventh, after he and David Turner got together coming off turn four. Al Purkey was the 9th-place finisher and is now down four points to Anderson with the final race of the season slated for Saturday at West Plains.

Notes: Moyer’s Victory Circle is powered by a Clements Racing Engine with sponsorship from L&D Trucking, Henderson Motorsports, Banner Valley Hauling and Minx Show Palace. ... Moyer’s 37 victories is third-most on the series all-time win list. Moyer’s behind Terry Phillips (101) and Purkey (49). ... The event was the MLRA tour’s first visit to West Plains since 1999. ... The series finale Saturday night at West Plains pays $3,000 to the winner.