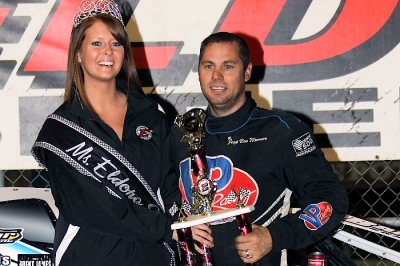 Van Wormer's victory on the Sunoco American Late Model Series was the 30th of his career on the Ohio-based tour as he pulled within six victories of all-time series leader Kris Patterson of St. Johns, Mich. | Slideshow

Starting outside the front row, Van Wormer led all 40 laps while the fourth-starting Heckenast crossed the line just behind him in the second spot. Jason Feger of Bloomington, Ill., winner of Friday night's Race of Champions, was third followed by 11th starting Kevin Cole of Christopher, Ill., and fifth-starting Ryan Unzicker of El Paso, Ill.

Unzicker's top-five finish came a week after he wrapped up the overall UMP DIRTcar points championship.

Scott James of Lawrenceburg, Ind., started seventh and was in contention for the victory when he smacked the wall on the 29th of 40 laps, forcing him out of the race with a 27th-place finish.

Van Wormer shot past polesitter Chad Smith at the drop of the green flag with Heckenast, Brian Shirley anf Feger in pursuit. As Smith faded, James worked his way into the mix and Heckenast took the second spot near the race's midpoint amid tight battles in the top five. During the caution period for James, Shirley parked with mechanical woes.

That left Van Wormer, Heckenast and Feger up front, and Van Wormer was able to maintain control the rest of the way for the victory.