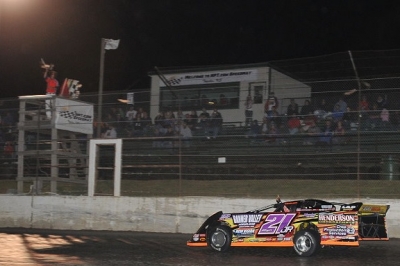 Completing a doubleheader sweep, Moyer led the final three laps Friday at Topeka, inheriting the point when leader John Anderson of Omaha, Neb., tangled with a slower car on the 37th lap. | Slideshow

Moyer added Friday's $3,500 victory to his $2,500 victory on Thursday, giving him a $6,000 weekend in notching his first career victories on the Missouri-based tour.

Moyer led the first 13 laps of Friday's main event before Anderson took command amid traffic. But traffic proved Anderson's undoing when contact between the leader and Robbie Andersen on the 37th brought out a yellow, handing the lead back to Moyer. Anderson pitted for repairs and rejoined the race just before it went back to green.

Moyer led the rest of the way with Terry Phillips of Springfield, Mo., in second. Al Purkey of Coffeyville, Kan., was third to pulled into a tie for the points lead with Anderson, who ended up 11th.

Tony Jackson Jr. of Lebanon, Mo., and Joe Kosiski of Omaha rounded out the top five.

Notes: Moyer Jr.’s Victory Circle Chassis is sponsored by Imperial Motors, Banner Valley Hauling and Henderson Motorsports. ... Moyer's previous victory before Topeka came in a weekly event at Tri-City Speedway in Pontoon Beach, Ill., on Aug. 26; before that, he hadn't won since May 7. ... Moyer hopes to continue his hot streak Saturday at Riverside International Speedway in West Memphis, Ark., on the Comp Cams Super Dirt Series. ... MLRA wraps up its season with $2,000- and $3,000-to-win events on Oct. 14-15 at West Plains (Mo.) Motor Speedway, the first series events at the track since 1999. John Anderson and Al Purkey will settle the title chase at the 3/8-mile oval.