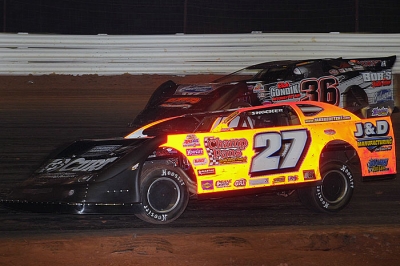 Jake Redetzke (27) moves by Darin Meierotto on his way to a $4,000 victory. (chrisburback.com)

The third-starting Redetzke, who already wrapped up the points championship on the WISSOTA-sanctioned Dart Challenge Late Model Series earlier this season, overtook outside-front-row starter Darin Meierotto of Superior, Wis., for the lead early in the 50-lap event and controlled the remaining distance for his first victory in the late-season special. | Slideshow

Polesitter Mike Goodremote of Sand Creek, Wis., slipped back to third on the start of the race, but recovered to finish behind Redetzke in the runner-up position. Justin Fegers of Minnetonka, Minn., advanced from the 13th starting position to finish third. Adam Hensel of Barron, Wis., advanced from 15th to fourth, while fourth-row starter Tom Waseleski Jr. of Pengilly, Minn., rounded out the race’s top five finishers. Meierotto finished sixth after leading the race's opening laps.

Redetzke joins his father Jerry, who won the event in 1999, as the only father-son combination to score Red Clay Classic victories. The triumph is the younger Redetzke’s sixth special event victory of the season. Other notable events he won this year include the $10,000-to-win Governor’s Cup at Hibbing (Minn.) Raceway and three Dart Series races.