Anderson tops Whitwell for $3,000 at Springfield 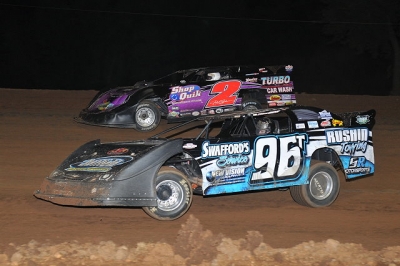 SPRINGFIELD, Mo. (Oct. 1) – John Anderson of Omaha, Neb., swapped the top spot with R.C. Whitwell of Tucson, Ariz., three times in Saturday night’s Larry Phillips Memorial at Springfield Raceway and led at the finish to score his first ever victory at the quarter-mile racetrack.

Anderson, the Lucas Oil Midwest LateModel Racing Association points leader, earned $3,000 in the event that was co-sanctioned by MLRA and the MARS DIRTcar Series. Whitwell settled for the runner-up finish while Jeremy Payne of Springfield charged from 15th to finish third. | Slideshow

Coffeyville, Kan., driver Al Purkey, Anderson’s closest challenger in the MLRA standings, was fourth in the final rundown with Tony Jackson Jr. of Lebannon, Mo., rounding out the top five.

"This is a fast racy little joint," said Anderson, who gained points on Purkey, the seven-time MLRA champion. "We're having a great time with Al trying to race this thing out. We're doing really well right now."

The runner-up finish is Whitwell’s best MLRA result of the season.

"I had a good battle with John Anderson there," Whitwell said. "I wish I would have had it a little tick faster; he ended up pulling away."

Payne earned the race’s hard charger award for his 15th-to-third run after winning a consolation race to qualify for the main event.

"It was a good night," said Payne, who started 15th in the 40-lap feature. "We just started so far back; with this competition, it's hard to get up there and win."

Brad Looney of Republic, Mo., wrapped up his first MARS championship with his ninth-place finish.

Notes: Anderson's MasterSbilt Race Car is powered by a Jay Dickens Engine and sponsored by Shop Quik Convenience Stores, Allstars Performance, Sunoco Race Fuels Turbo Car Wash and the F.A.I.T.H. Youth Team. ... The victory is Anderson third in the past four events on the MLRA tour and the 24th of his career. It is his second-career MARS sanctioned victory. His previous MARS win came at the Great American Dirt Track in Jetmore, Kan., in 2010. ... Next up for the MLRA tour is an Oct. 6-7 doubleheader weekend at Heartland Park Topeka. Each feature pays $3,000 to the winner.