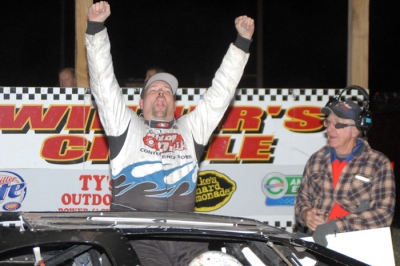 GREENWOOD, Neb. (Sept. 24) — Winless through late August, a late-season turnaround has John Anderson of Omaha, Neb., back on track and back on top of the Lucas Oil Midwest LateModel Racing Association points.

Anderson jumped to the lead from outside the front row Saturday at I-80 Speedway and raced to a $3,000 victory in the finale of the Cornhusker Clash, a weekend event co-sanctioned by MLRA and the Dart Corn Belt Clash Tour. The 2008 MLRA champion moved ahead in the series points over reigning champ Al Purkey of Coffeyville, Kan., who couldn't crack the top 10 in the weekend doubleheader. | Slideshow

"We just needed to put the package together," said Anderson, whose first victory of the season came Aug. 21 in Sedalia, Mo. "Me and (crew chief) Vinny (Guliani) are gelling real good. The boss (team owner Greg Junghans) wasn't here tonight. We'll be glad to call him and let him know how this went."

Anderson was challenged early by second-running Kelly Boen of Henderson, Colo., but Anderson's maneuverable car enabled to him to slip away.

Jill George's flat tire with four laps remaining set up a late-race restart with Boen on Anderson's rear deck, but Anderson pulled away to take the checkers.

Jason Rauen of Farley, Iowa, dropped Boen to third in the closing laps while Iowa drivers Chad Simpson of Mount Vernon and Dave Eckrich of Cosgrove rounded out the top five.