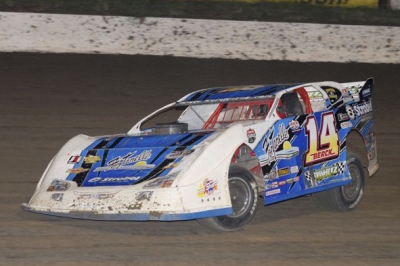 Kyle Berck heads to a 25-lap victory on Friday at I-80 Speedway. (Andrew Towne)

GREENWOOD, Neb. (Sept. 23) — Picking up his first open-competition engine victory of the season, Kyle Berck of Marquette, Neb., led the final 16 laps Friday at I-80 Speedway in the opening race of the two-night Cornhusker Classic.

Berck earned $2,000 for the victory co-sanctioned by the Lucas Oil Midwest LateModel Racing Association and Dart Corn Belt Clash at the 4/10-mile oval between Omaha and Lincoln. | Slideshow

"We have won several races with the (Nebraska-based Super Late Model Racing) Series and in the modified, but hadn't picked off a win in the open series," said the 42-year-old Berck, twice second in MLRA action at I-80 earlier this season. "It's nice to do that, even thought it's the end of the year.

"This track's been good to me this year, and it certainly feels like home here. The car was really good on the bottom and the top."

Denny Eckrich of Tiffin, Iowa, finished second in the main event with John Anderson of Omaha in third. Early leader Jason Rauen of Farley, Iowa, who gave up the lead to Berck on the ninth lap, was fourth and Corn Belt Clash points leader Chad Simpson of Mount Vernon, Iowa, rounded out the top five finishers.

Notes: Berck's Swartz Race Car is powered by a Wegner Automotive Research powerplant and sponsored by Fontanelle and Strobel Manufacturing. ... Berck has 13 career MLRA victories; it was his first with the Corn Belt Clash. ... In modified action, Berck captured a heat and dash victory to earn the pole for Sunday's $4,000-to-win modified feature. ... The race required a second start after Kelly Boen and Al Humphrey made contact coming to the initial green flag. .... Joe Kosiski brought out a lap-10 caution with a broken tie rod in the only other slowdown in the event. ... Every heat winner started fifth or deeper in the field. ... Al Humphrey of Giltner, Neb., rallied from his 10th starting spot in his heat to finish second, earning the pole for the main event. ... Twenty-four of 28 starters were running at the finish. ... Among drivers failing to make the main event: Jase Kaser, Bill Leighton, Bill Koons, Bo Egge, Scott Koskovich and Jason O'Brien, who was running fourth in a heat race when hit got into the turn-one wall in a flipping accident. He walked away with no serious injuries. ...ï¿½ Cornhusker Classic action continues Saturday with a $3,000-to-win main event.