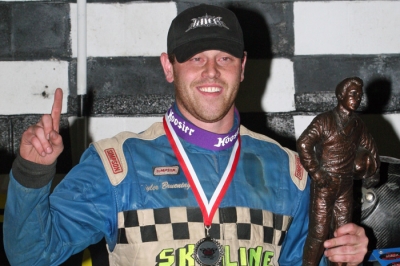 FARLEY, Iowa (Sept. 17) – Tyler Bruening says its always good when hard work pays off. In his case, that effort resulted in his career first win on the Deery Brothers Summer Series circuit and a check for $7,500.

“I couldn’t believe I won it,” he admitted. “This is definitely the biggest win of my career. It makes all the hard work pay off.”

The only caution of the contest came for debris on lap three. Bruening caught up with the back of the 24-car Yankee field by lap 17 and built a sizable advantage by midway.

That comfortable lead disappeared by the final laps as Denny Eckrich gradually reeled the leader back in. Eckrich tried inside and was right alongside Bruening the last time around the oval.

“After the first few laps, I felt we had the car to beat. I’d gone into the race anticipating running around the bottom but after we got out there that part of the track went away and I ran a higher line,” Bruening said. “I kind of got stuck in lapped traffic late in the race and he (Eckrich) closed right up on me.”

“I had pushed the car pretty hard all night,” he added. “After the race we pulled in and took a look at the right rear tire and it was pretty well gone.”