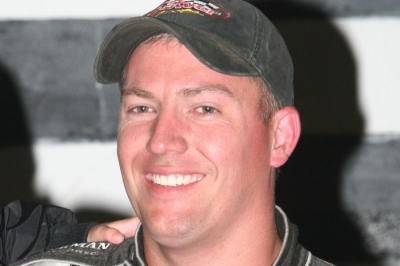 Winning Farley Speedway's biggest event for the third straight year and fourth time overall, Simpson earned $7,500 on Saturday for his 50-lap triumph at the half-mile oval. The 32-year-old driver rallied after a consolation race victory to overtake Charlie McKennie on the 32nd lap and led the rest of the way in the open-competition portion of one of Iowa's biggest dirt racing weekends. | Slideshow

Simpson joins Denny Eckrich as a four-time winner of the race and is one shy of Steve Kosiski's record of five Yankee victories.

"It's always big to come to the Yankee," said Simpson, who started in the seventh row. "All of the history and you see the names of the guys who have won it on the backs of the shirts, it is something special, especially now winning it four times. In 2005, it was more by luck than anything, but the last three years we have been really strong here."

Dave Eckrich of Cosgrove, Iowa, finished second in the unsanctioned event with Justin Mitchell of Cedar Rapids, Iowa, in third. Curt Martin of Independence and Joel Callahan of Dubuque completed an all-Iowa top five. McKenna, a driver from Clear Lake, Iowa, making a rare open-motor appearance, got into the frontstretch wall late and then flattened a tire. He ended up eighth in a race were 11 of 24 starters were running at the finish.

Steve Ihm and McKenna started on the front row of the main event with McKenna blasting into the early lead, setting a torrid pace on the freshly groomed track.

The race was halted by a red flag on the 11th lap when Ihm's car lost power entering the front chute. As the Wisconsin driver attempted to exit the track, he collected Jason Rauen, whose car tumbled in a rollover accident. Andy Eckrich was also involved but no one was injured.

McKenna led a pair of brother combos — Denny Eckrich, Dave Eckrich, Chad Simpson and Chris Simpson — back to green. Cautions on laps 16 and 18 slowed the action, with Denny Eckrich giving up the fourth spot with carburetor problems on the second yellow.

McKenna held off Dave Eckrich and Chad Simpson through the next stretch of the race, but Simpson turned up the heat past the halfway point, taking second from Eckrich on lap 28 and gunning into the lead four laps later.

"Both of those guys had good cars," Simpsons said. "I knew mine was going to be better if I was the only one running on the bottom. I stuck it out down there, and coming off of one and two, I was able to gain on them every lap."

A lap-42 caution appeared when Jeremiah Hurst and Chris Simpson tangled in turn two while running in the top five. Simpson was done for the night, but his brother led the final eight laps to wrap up the victory.

"With the track the way it was, we figured everybody would go to the top at the start," the winner said. "We knew that if we could be good on the bottom, we could pass a lot of cars early. When we practiced here on Thursday, we had the car close but it wasn't quite there. On Friday night we didn't gain much, so tonight it was a big gamble with what we were doing because we weren't sure what the car could do. We ended up having enough drive coming off the corners running on the bottom."

Runner-up Dave Eckrich was practicing patience in chasing McKenna the first half of the race.

"I thought Charlie might blast through the top and we could take the lead that way, but he never did," he said. "I needed to be freer going into the corners. I needed to be able to turn more in the entrance than I was able to. Chad had a really good car and we needed just a little more."

McKenna fell short in an opportunity for one of the best performances of his career.

"I can't tell you how disappointing it is," he said. "We had a good car, and would have been excited with a finish anywhere in the top five. But to have to restart at the back with so few laps to go, it is so disappointing."