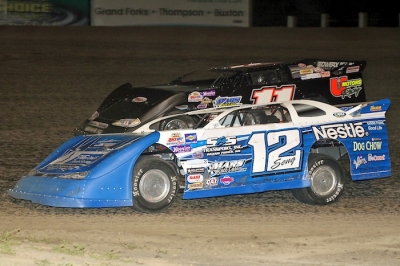 GRAND FORKS, N.D. (Sept. 9-10) — Looking to the heavens and clinching a victorious fist, Brad Seng had this message: "Johnny, we did it buddy!"

Remembering his friend and late racer, Seng captured Saturday's fifth annual John Seitz Memorial at River Cities Speedway for a career-high $9,200 in one of the biggest WISSOTA events of the season. The hometown driver started outside the front row and led all 92 laps in a victory over polesitter Brady Smith of Solon Springs Wis., in an event that drew a whopping 58 entrants. | Slideshow

Previous winner Pat Doar of New Richmond, Wis., was third after swapping the runner-up spot with Smith several times while Lance Matthees of Winona, Minn., and Jake Redetzke of Eau Claire, Wis., rounded out the top five. The race was halted on the 30th lap for a fuel stop, but just one caution slowed the action over the final 62 laps.