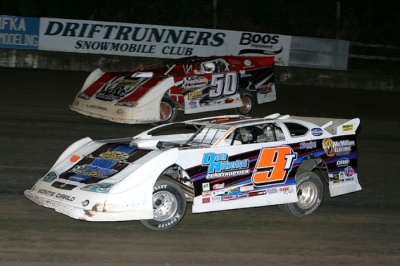 Isenberg jumped into the lead at the outset and was maneuver through lapped traffic after 10 laps while Eckrich gave chase with the Simpson brothers. Isenberg maintained his edge on Eckrich while Rauen rallied into the lead pack.

Action was tight with five laps remaining among the top five, and Eckrich made his move in the closing moments, going to the outside of Isenberg between turns three and four for the winning move. He took the checkers a half-length ahead of Isenberg with Rauen just behind.

Notes: Eckrich’s race car is sponsored by Precision Performance and Mac Tools. ... The victory is Eckrich's first of year of the Corn Belt Clash tour. ... Eckrich’s younger brother Andy scored a $10,000 victory in 34 Raceway’s USA Pepsi Nationals on the same night. ... Up next for the series is a Sept. 23-24 doubleheader at I-80 Speedway.