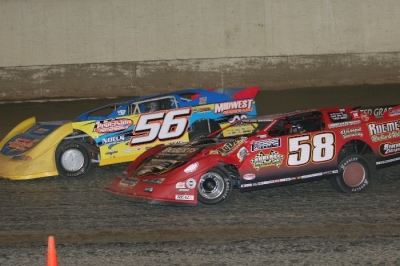 Guss, the defending champion and current series point leader on the tour for IMCA Late Models, ran out front for most of the 99-lapper before getting stuck in slower traffic. Eckrich, the tour’s 2010 rookie of the year who currently sits second in the series standings, went around on the higher line with eight laps remaining and beat Guss to the checkers by a car length.

Guss had the pole, but it was outside-front-row starter Tyler Bruening of Decorah, Iowa, who was first across the stripe through lap 22. That impressive run came to an end while the frontrunners negotiated lapped cars and Bruening spun after trading paint with Guss.

Three cautions for debris came around midway, as Guss set the fast pace ahead of Eckrich and Johnson. Eckrich finally pulled ahead after trying both the inside and outside grooves, but it only lasted for a moment before Guss got the lead back.

Staying close, Eckrich made what proved to be the winning pass when Guss got caught up with slower traffic with eight laps remaining.

Denny Woodworth and Reed were deciding third place when Woodworth spun to bring about the final caution. Eckrich held on the last two times around the oval for his third series victory of the season, and the fourth of his young career.

Jason Perry got the final provisional, started last in the field of 26 and advanced 17 positions to finish ninth and earn hard charger honors.

The Sunday show at West Burlington was rescheduled from Saturday because of inclement weather. Time trials and five heat races were on the Friday card; T.J. Criss was the $750 winner of the J & J Steel Ironman Challenge on opening night. Part of the Deery Series for 13 years, the 2011 Pepsi was held in memory of former track owner and promoter Johnny Johnson.

The tour returns to action again Monday, when the silver anniversary series headlines opening night action at the IMCA Speedway Motors Super Nationals fueled by Cenex at Boone (Iowa) Speedway. Guss heads into the event with a six point advantage over Eckrich in the series standings.