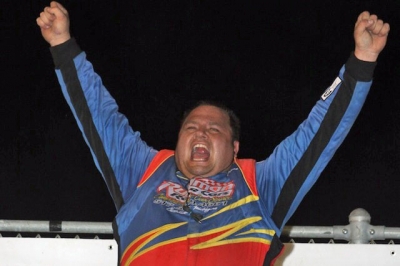 ROSSBURG, Ohio (Sept. 4) — Starting in the middle of the second row in the first-ever three-wide starting formation for Late Models at Eldora Speedway, Brian Ruhlman of Clarklake, didn't get anxious despite being surrounded by eight other competitors.

He stayed calm and collected and when the bunched-up field began to get little breathing room, Ruhlman held the third spot and knew he had a chance to win the fourth annual Baltes Classic. | Video | Notebook | Slideshow

"I just kind of waited to see what happened, and there was kind of an opening opened up," the 40-year-old Ruhlman said. "I got down to the bottom and just kind of let the car do what it wanted to do.

"The first couple of laps, you kind of know good your car is — I knew we had something there."

That something turned out to be enough to guide the three-time series champion to the Sunoco American Late Model Series victory worth $3,300, his 22nd tour victory of his career but his first Late Model victory of any kind in 2011.

Canadian invader Andrew Reaume of Blenheim, Ontario, led a few laps midway through the race before engine woes forced him out, and polesitter Duane Chamberlain of Richmond, Ind., ran in the top five all the way, crossing the line fourth before coming up 6 pounds light at the scales for a disqualification.

While Ruhlman and everyone else had a uneventful start despite pre-race tension about the rare three-wide formation — the green flag flew with the field at a slower-than-usual pace in turn three, making it somewhat less hectic despite a rugged racing surface — the eventual winner and everyone else were chasing VanderVeen and Reaume the first half of the race.

The frontrunners built a straightaway lead after 10 laps, and Reaume's car began showing smoke just before he made a bold outside move exiting turn four to take the lead on the 16th lap. But just a few laps later, Ky Harper's spin brought out the third of seven yellow flags, and Reaume retired during the caution period, handing the lead back to VanderVeen.

But VanderVeen realized he'd virtually lost his brakes, and a too-soft tire choice was costing him trying to get going after cautions.

"We didn't know the track was going to polish up like that. We thought our (softer tires) would probably last, so I was really struggling on the restarts," he said. "The tires just wouldn't go. They were pretty well worn out."

Ruhlman took advantage on a restart with 11 laps remaining, taking a lead he'd never give up. A final caution with five laps remaining after a frontstretch tangle between Dona Marcoullier and series points leader Jon Henry gave his pursuers one final shot. They stayed close for a lap or two before Ruhlman pulled away to take the checkers a half-straightaway ahead of Roberts, who restarted fifth after the final caution.

"I just didn't want to drive over the cushion and tear the nose off or something stupid on my own," Ruhlman said of the final restart. "I figured as long as I hit my marks and came in low the first couple of laps — to where they can't really slide-job you. If you can enter (the corners) in the slide-job lane, then once you get your momentum up, you can go back to your normal groove."

Roberts rebounded from a heat-race miscue when he drove too hard into a corner and lost his car's nosepiece, costing him a chance to start up front. He spent the race picking his way toward the front after starting in the middle of the seventh row.

"That's a long ways back, but we had a good car all night. In hot laps we were good, and obviously in the heat race we were good," he said. "We went out about a straightaway (lead) there until I jumped the cushion and ripped the nose off. ...

"You kick yourself in the butt — it was my fault. I just drove in way too hard and jumped the cushion. It does make you feel good (to come back and finish second). Almost as good as winning, but not quite."

Seven cautions flew, the most serious for a turn-three scramble that involved five cars, including Austin Dillon of Welcome, N.C., who tagged the tail of the field to avoid any issues with the three-wide start.

Ky Harper was part of cautions on laps two and 18, while Jeff Babcock was running fifth when he jumped the cushion and damaged the front of his car in the second half of the race. Other yellows were for minor incidents except the frontstretch collision between Marcoullier and Henry, which sent Marcoullier's car briefly bounding into the air. Their cars came to rest side-by-side at the end of the frontstretch and they engaged in an animated conversation about who was to blame for the incident.

Notes: Ruhlman's Rocket Chassis is sponsored by Ruhlman Race Cars and Spartan Tool Co. ... Wix Filters was presenting sponsor of the event. ... Ruhlman notched his first series victory since Aug. 21, 2010, at I-96 Speedway in Lake Odessa, Mich. ... He's third all-time in series victories behind Kris Patterson and Jeep Van Wormer. ... Ten drivers finished on the lead lap. ... Ryan VanderVeen was looking for his first career ALMS victory. "We've been getting better here at Eldora, so we probably should be happy with fifth place," he said. ... Jon Henry started near the tail of the field after breaking a water pump in a heat race he was dominating. ... Fast qualifier Andrew Reaume picked up $250 from the St. Henry Commercial Club. ... "I just went in and hoped for the best, and I was happy to see that 15.6 on the board," Reaume said. ... ALMS competitors take a month-long break before the series finale back at Eldora on Oct. 7-8. Saturday's event at Oakshade Raceway in Wauseon, Ohio, was rained out.