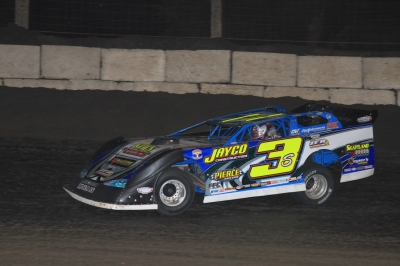 FAIRBURY, Ill. (Sept. 2) – Capitalizing on a scuffle between leaders Kevin Weaver and Jason Feger, Brian Shirley of Chatham, Ill., moved from third to first midway through Friday night’s Prairie Dirt Shootout at Fairbury American Legion Speedway and led the remainder of the 40-lap race to pick up a $5,000 payday. | Slideshow | Video

The third-starting Shirley was running behind Weaver of Gibson City, Ill., and Feger of Bloomington, Ill., when Feger attempted a slidejob on Weaver entering turn three. Weaver looked to pull back under Feger in turn four, but the two drivers made heavy contact with their race cars latching together down the front straightaway.

Shirley jumped at the opportunity, sneaking by both Feger and Weaver at the flag stand. He cruised the remaining distance and held a comfortable margin over Feger, who recovered to finish second. Defending Prairie Dirt Classic winner Billy Moyer of Batesville, Ark., was third while Weaver held on for fourth. Shannon Babb of Moweaqua, Ill., rounded out the top five finishers.

“It’s definitely nice because we’ve had a couple of ‘em that we’ve kinda gave away ourselves,” Shirley said of his visit to victory lane. “It’s nice to get the return every once and a while. It lets you know you’re not always on the bad side of the hill.

“We were lucky enough to win it last year. It’s always nice to get the first night out the way. Tomorrow night is the same thing, just go out there; it’s a long race, just put in some laps.”

Feger, who had stalked weaver the entire distance after moving from fourth to second on the race’s opening lap, wasn’t happy with the outcome of the two drivers’ mid-race run-in.

“I had a nose on him getting into three and he knew I was gonna slide him,” Feger said. “I slid him clean; it’s not like I took off his nose or anything. He had plenty of room to turn and drive underneath me, but he tried driving in the back of me.”

Weaver admitted he may have made the wrong decision, adding that the incident cost him at least a second-place finish.

“Jason got up alongside me there and there’s so much dirt and crums in the middle of the racetrack, but I wasn’t gonna give up easy either,” Weaver said. “I guess it turned out I should have hit the brakes and let him go and should’ve run second.”