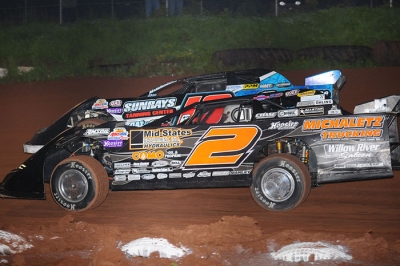 Brady Smith (2) uses the inside groove in a Silver 1000 heat. (chrisburback.com)

PROCTOR, Minn. (Sept. 1) — After taking advantage of a mistake by Marshall Fegers on a late restart, Brady Smith of Solon Springs, Wis., led the final 11 laps of Thursday night’s Silver 1000 for WISSOTA Late Models on his way to picking up a $2,500 victory at Proctor Speedway.

The eighth-starting Smith moved into the top five early in the event, and was up to third when early leader Lance Matthees of Winona, Minn., slowed from the second position to bring out a caution. | Slideshow

Smith was in the right spot at the right time on the ensuing restart, moving by Fegers when the Mound, Minn., driver jumped the cushion in turn one. Smith pulled to the lead and never looked back, cruising through the closing laps of the race to claim his first Silver 1000 victory.

Tom Waseleski Jr. of Hibbing, Minn., also moved by Fegers on the lap-39 restart and followed Smith to the finish in the runner-up position. Fegers, who fell to second on the start of the race before overtaking Matthees midway through, settled for third at the finish. Jake Redetzke of Eau Claire, Wis., was fourth with Harry Hanson of Evenleth, Minn., completing the top five.