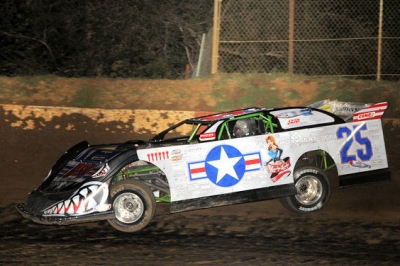 The second-starting Feger turned back polesitter Billy Moyer of Batesville, Ark., early in the race and later survived a mid-race battle with track champion Steve Lance Jr., of Cuba, Ill., before cruising to a victory that ended Lance’s eight-race winning streak at the quarter-mile oval.

“Those guys put up a great fight,” Feger said of his challengers. “It’s hard to keep a streak going but Steve had it going on tonight and any time 21 is behind you, you get worried. That was a great race and the track was in good shape. We love running here and wish we could do it more often.”

Feger moved to the lead on the start of the 30-lapper and held off repeated challenges from Moyer during the race’s opening laps while Lance worked his way forward.

After moving by Moyer for second on lap 10, Lance ran down Feger in slower traffic and moved by for the top spot on lap 17. But a caution two laps later cleared the track ahead of the leaders, and Feger retook command on lap 21.

Moyer moved back to the second position by the finish while Kevin Weaver of Gibson City, Ill., moved to third. Mechanical troubles caused Lance to fade to fourth in the closing laps with Billy Drake of Bloomington, Ill., rounded out the race’s top five finishers.

Brandon Sheppard of New Berlin, Ill., wrapped up his first series championship with his 10th-place finish and Mike Spatola of Manhattan, Ill., notched Rookie of the Year honors.